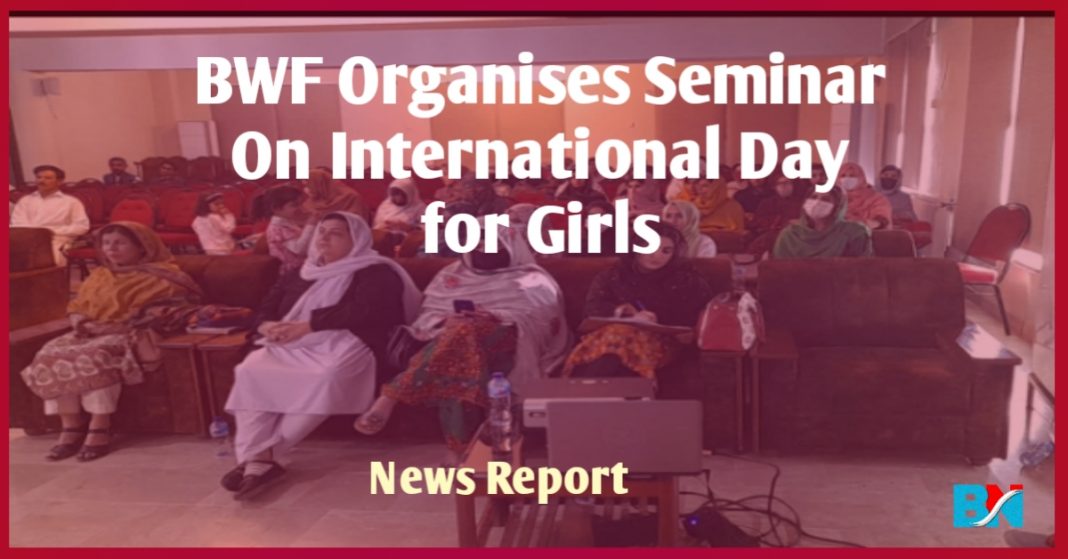 At the beginning of the program, the organiser of Baloch Women Forum, Zeen Gul Baloch uttered that women comprised half of the society, but their intellectual abilities were being exposed to outdated traditions and religious extremism. Referring to the politics of Balochistan, she addressed that the Baloch nation needed to be freed from its political interest and devoted to national development instead of individual politics. It is important so that the leadership could be transferred to the right hands.

In the program, the girls presented a tablue on the importance of education and a motivational interview of Amber Baloch, who hails from Dasht Bal Negwar, was also shown during the seminar.

Banuk Mehlab Naseer’s video message was also aired in which she mentioned the problems of Baloch girls and said that parents should listen to children so that they did not go towards commiting suicide. Addressing the girls, she said they should be happy that a beautiful day had been fixed for them. Banuk urged the girls to get education to the core.

In the program, Zia Baloch said regarding child protection that Baloch children were sitting in the camps of missing persons and asked, “What do we see in their future?” He said that, to a misfortune, no legislation had been made on child marriages yet.

Central Committee member of Baloch Students Action Committee, Dr. Sumayya Baloch said that women were dying due to retained placenta in Balochistan. “In the 21st century, our women are deprived of even the slightest treatment that can be solved with just one injection in five minutes,” she maintained. She further said that not only women but also men were suffering from cancer and deadly diseases due to ultraviolet radiations after the 1998 nuclear test in these areas of Rasko (Chaghi).

Rukhsana Baloch said that women had not been able to make their identity as individuals yet. “A woman yet introduces herself by her brother’s, father’s or clan’s name,” she commented. She added that a woman had to think that if she wanted to play a momentous role for the development of Baloch society, then she had to make her place in her field including her own individuality.

While speaking, Nasrullah Baloch said that the heads of hundreds of families had been forcibly disappeared in Balochistan due to which Baloch girls are deprived of their fundamental right to education.

BNP leader Shamaila Ismail said that the number of women in the parliament was very less and women did not have any vital role in the legislation. She addressed that the quota of women should be increased and there was a need to legislate for equality.

The special guest of the program Banuk Noreen Lehri said that they thought there was progress in education and other sectors but the reality was opposite. “Quetta is the capital of Balochistan but there are also problems of education and health here on a high scale,” she sustained. She said that Balochistan had the lowest literacy rate for girls in the world which was very disturbing.

Article 25A of the Constitution of Pakistan has the responsibility of the state for the education of children between the ages of six and 16 years, but unfortunately, it is unable to fulfill its responsibility, the guests highlighted.

At the end of the program, Sultana Baloch, in charge of Baloch Women Forum Shaal Zone, thanked all the guests and her team and announced that BWF would organise a program to pay tribute to Banuk Karima on her second anniversary.