‘Maah Ey Sar O Roche Cher’, authored by a well-known Baloch writer Ghani Parwaz, was published in 2017 by Balochistan Academy Turbat. Parwaz has got fame in the Balochi literature for his simple writings of short stories and novels. Besides Balochi, he writes in Urdu as well. His published books include “Shap Jathen Raahi”, “Mehr-e-Hoshaam”, “Morthgen Marday Pachen Cham” and so forth.

‘Maah Ey Sar O Roche Cher’ is a novel based on a love story of a girl and a boy. The main characters are Mehri, a Baloch girl from Kech district, and Sahir, an Urdu-speaking boy.

Their love story begins with a wrong call. After Mehri mistakenly calls Sahir, he attends the call. She realized she had made a wrong call. In the following moment, she cuts the call and switches her mobile off. Sahir, on the other hand, texts her to ask for her name. After she switched on her mobile and found his message, she got interested and, instead, asked for his details. He narrated everything he had to tell. And then the conversation went on and on.

Parwaz has great skills of bringing twists and colors in his scripts. From a wrong call to all their meetings and love, Parwaz has systematically cribbed the whole scenario into the pages of the book. It enhances the author’s worth to connect such a love story from two disparate backgrounds, cultures and geographies.

After Mehri and Sahir decided to marry, they had to go through multiple hurdles. They were to face dilemmas concerning their caste, race and nationality. Apart from the story of novel, caste, in particular, has been a major issue faced in Balochistan – and the other parts of the country as well. While coming to nationality, the cruelties of Punjabi fascists towards the Baloch are a major factor for the hatred of Baloch towards the Punjabi and the Urdu-speakers in specific.

Very heartbreakingly, when it comes to a girl marrying anyone away from their race, caste or nationality, the problems even strengthen. However, true love, as Parwaz believes too, will ever last long, like that of Mehri and Sahir, who, despite facing unconditional harshness, got to marry and be together for the rest of their lives.

Through this novel, I felt Parwaz wanted to narrate how the situations of Balochistan were owing to the external factors entering the region. He also inscribed, in the true sense, how one can go at the peak to get anything he or she desperately wanted.

Finally, I recommend everyone to read the book so as to know the real face of Balochistan, what the situations of the region were during the 1st and 2nd decades of 21st century and to get many other things as well. By reading the book, you will realize what the true love and its power is. The book takes you to another world where you know who you are, what you have to do and how true love comes to meet. 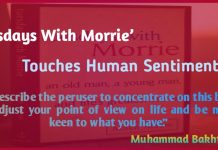