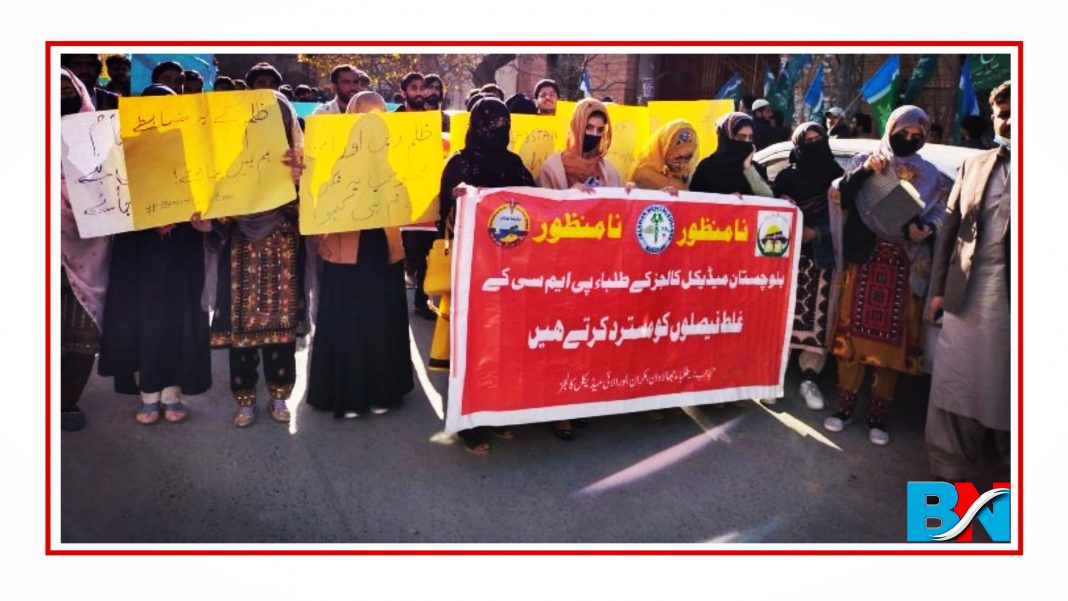 It has been seventeen days since the students of three newly established medical colleges of Balochistan are on a sit-in protest outside Quetta Press Club against Pakistan Medical commission’s new policy of conducting a test to check the credibility of the students for registration. These medical colleges were functionalized in 2018-19 by government of Balochistan. Since then, each year around fifty students are being enrolled in these institutions on their seats based on merit which were approved from the provincial assembly. The tests, taken for their enrollment, were conducted by HEC, UHS Lahore, PM&DC (now PMC) respectively since their establishment.

In December 2018, PM&DC paid no visit to these colleges. But before forwarding their recommendations, the council was dissolved and replaced by Pakistan Medical commission. After that, PMC started inspecting these institutions. After its recent visit in November (2021), the council announced a special examination for the registration of already enrolled batches.

Approximately, Pakistan Medical Commission has 237 sections as the commission to regularize the admissions for medical colleges and registration of doctors. But there is no such a law of a special examination for the students to register them with the commission once admitted to an institution after passing the MDCAT conducted by recognized institutions of the country. So, this is being implemented on the students of the only three new medical colleges of Balochistan (Makran Medical College, Loralai Medical College and Jhalawan Medical College) despite having no such law in the Act.

Anyone who secures admission in the field of medical at once, the pressure is exerted on the students from multiple sides from day one. Any such biased decision contributes to the rising level of stress and lack of sleep among the students which may make them unable to perform on such occasions. So, it is totally an injustice to the students of an already suffering province. The region is deprived of a good education system, such policies only worsen the previously deteriorating education.