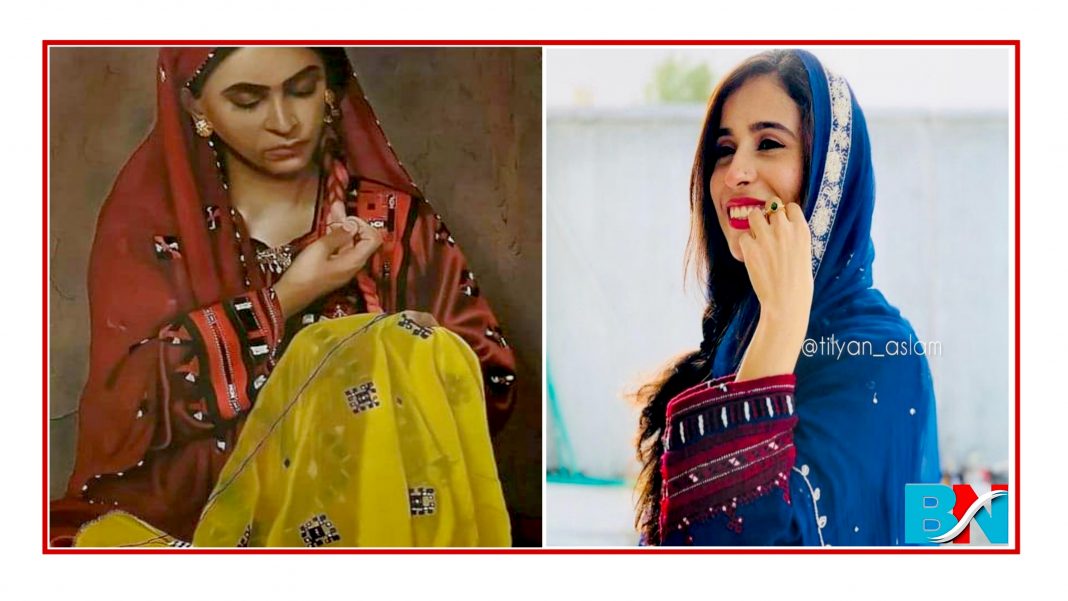 As a Baloch girl when I walk into a room full of different people, what outwardly attracts the people around me is; my cultural Balochi attire. I often get compliments from people around telling me how beautiful and enthralling our Balochi dresses are. I remember once this lady came up to me in an international fair to photograph me for her magazine-project because of the way I was dressed – in a traditional Balochi dress. I have heard it more than enough times about the beauty and creativity of Balochi dresses, but regrettably, those compliments never really got into a point where we could discuss the people and hard-work behind those dresses.

Balochi dresses are the result of utmost passion, hard-work and dedication. The professionals who make Balochi dresses are called ‘Dochgir’ in the local Balochi language, and they are the key reasons behind these breathtaking outfits. They make these dresses out of scratch without technology and other resources. They make up their own designs by doing a lot of experiments and end up making something creative and later name it as per their convenience and the structure of the ‘Doch’ (embroidery).

Luckee, a tremendously diligent and hardworking woman in her mid forties from a village named Saami (Makran, Balochistan), is one of the reasons that I had to write this piece. Her story, unalike any other person I have come across, is rare. Even though, most of the embroiderers (Dochgir) are Baloch women who sew dresses to support their families financially, but Luckee’s story has stood to me in a way that I am beyond thrilled to share it.

In tribal Balochistan, means of earning is either agriculture or livestock. The lives there are very primitive, far from technology and present day facilities. Baloch women have sewn dresses for centuries to upkeep their families helping their male counterparts in the house. The handicraft skills of the people of Balochistan are ancestral which have been passed from one generation to the other.

Dochgirs (embroiderers) not only sew doch (embroideries) in their own villages, but travel near and far to make these dresses from almost anyone especially those who they are familiar with already. So few months back, I got a chance to have a conversation with Luckee about her life and I was blown away with what she shared with me.

The tale of agony, striking poverty and lack of platform for Baloch dochgirs was so gut-wrenching to know from the one already suffering with it. “I was married to a man who didn’t earn. He was a drug addict,” she continued with grievance. “I got divorced after undergoing domestic abuse from my husband.” Long before even Luckee got divorced, she was the only one in her family working and earning. “I have no option, even till today, but to sew dresses and raise my two sons,” states Luckee.

The village of Saami, that she lives in, has drastically reduced the population since the past years. The Nawabs and Gichkis who have ruled these places for years, have moved to cities long ago except few of the families. “The only people who haven’t moved out of the village are those who cannot afford to live in big cities – people like us,” she shared, “I used to live with my other family members in their house, but the space started shrinking as my older son got married. So I had no chance, but to buy a house from someone who no longer lived in the village in a lesser amount,” she added. The house she bought is shabby, but gives her a shelter and she is grateful for it. “I had to work hard to sew many Balochi dresses to get money for a committee to buy the house. I still haven’t paid the total amount of my home,” said Luckee, her eyes filled with tears.

When I asked her about the education of her younger son, who passed his 10th grade, her words gave me shivers down to my spine. “Don’t you know about the inflation in the country?” she asked, to which I replied, “Yes, I do, but I’m also well aware of the fact that without education you cannot improve the lives you are living – in poverty and ignorance.”

Her reply was quick and truly upsetting to hear from her own words, “Education is expensive. It is for the rich ones. We barely manage to find meals of our day. With an empty stomach, you cannot think of educating your children, but feeding them,” she also added, “I wish my son could go to college and become a great person after 10th grade, but we cannot afford it.”

In a resource-rich province like Balochistan, the people are enduring poverty in a way that for them two basics of life, food and education still remain the biggest hurdles of life.

Balochistan is a home of arts, culture and creativity. It is very unfortunate to know that the baseline of the creative works; dochgirs, regardless of the efforts they put into their work, rarely manage to upkeep with their everyday living. Creativity takes courage. Every Baloch Dochgir puts their heart and soul in their embroidery work, but sadly their hard-work does not pay off as much as it should.

It is about time that these Dochgirs should be given the opportunities and recognition that they deserve. Our government should take steps to promote art and culture in the country and make policies that provide dochgirs with a platform to showcase their talents and skills to a wider community. Hardworking people like Luckee deserve to be given chances to flourish with their handicraft works which deserve coverage, for it is worth it.