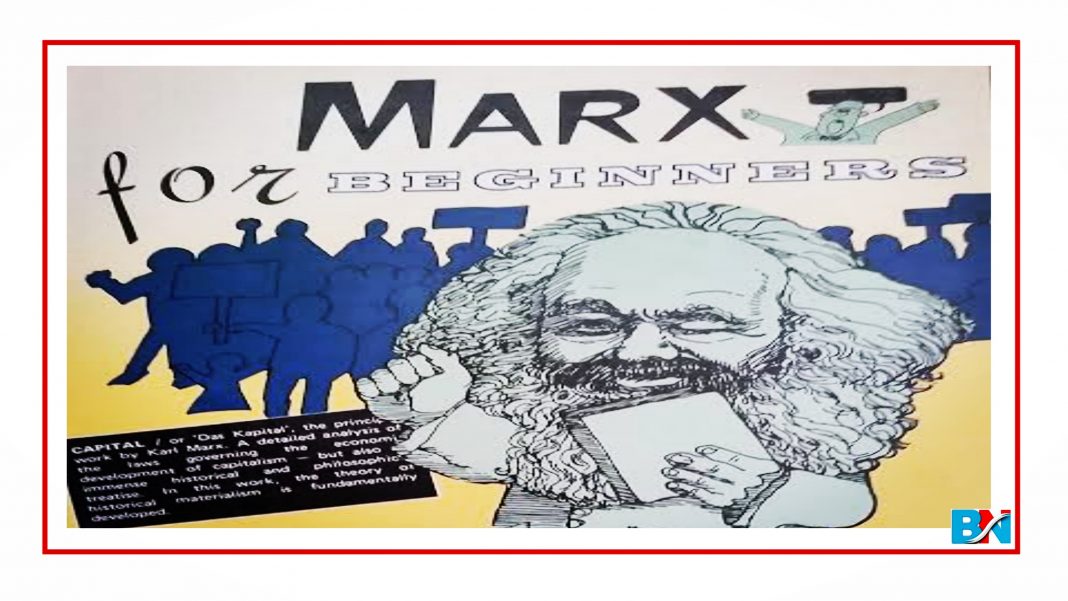 Today, reading Marx is more significant than ever. Since Marx, Capitalism has developed and become the global economic system. Reading a critic like Marx is important because it helps you understand the basic innate flaws of a capitalist economic system. Although, to understand a system completely, one must pay attention to both the critic and supporter of the system.

Today, we see a supporter of capitalism on every news channel but those who criticize capitalism are pushed aside. To understand the other part of the story, reading Marx is important because if matchboxes are invented then it will be stupid to start a fire by rubbing stones.
For two centuries, Marxian thinking or we pronounce it Marxism has been leading the thought which is critical of capitalism. So, in this article, we will try to understand Marxism as simply as we can.

Like all the young minds of that time, Marx was also impressed by the French and American revolutions which promised equality, liberty, and democracy. The gap between Marx’s birth and the American and French revolutions was 42 years and 29 years respectably. Because of this, when Marx reached adulthood, he realized that those promises were empty and he started looking around, where he found that actually the capitalist system has divided society into two classes; the employee and the employer (which he called Proletariat and Bourgeoisie). The Proletariat class is the one we call the working class who sells their labour in return to earn a wage. This may include factory or railroad workers, office going workers or truck drivers etc. While Bourgeoisie is simply the Capitalist; the class which controls the means of production; what should be produced, who should be hired, how much should one product cost etcetera. Business giants are the Bourgeoisie. But this definitely does not limit to this definition.

So, the Marx saw that one class has all the opportunities and the other was deprived of those. The so-called free man was not free. Marx discovered that the structure of capitalism itself is the obstacle that is not permitting it to achieve those goals which it promised. Further, Marx discovered that although capitalism is a different economic system, it has some key features of the past economic system like slavery and feudalism.

In a slave society, slaves did all the works and the master only supervised them. A slave remained almost always a slave. The percentage that a slave could escape its class was near zero. The slave’s working day was divided into two parts. Marx called them “necessary labour” and “surplus labour”. The portion of the labour which returned to him was necessary labour, while the portion which was placed into the master’s bucket was called surplus labour.

Similarly, in a feudalistic economy, the class was divided between lords and serfs. Where lords owned the entire lands and serfs were the workers on those lands. Similar to slave society in feudalism, the serf’s working day was divided into necessary and surplus labour but the percentage of serfs escaping their class was much higher than that of slave society. Marx argues that capitalism likes slavery and feudalism divided society into two classes –employer and employee– and also divided the working day into necessary and surplus labour. Even though the percentage of to escape one’s class was much higher than the past economic system. But it still did not achieve what was promised because the percentage was not the problem. The problem was the existence of a class system that does not allow equality and fraternity in society. From an economic perspective, there is not much difference between a person who sells his labour for a minimum wage (employee) and serfs or a slave. The only liberty an employee has over a slave or serf is that he can choose and switch his master (employer).

Marx thinks that the reason capitalism is an exploitative system is because a tiny minority decides how to use the majority’s surplus production. The employee which is in majority has no say in decision making while they are the ones who have to live with those decisions.