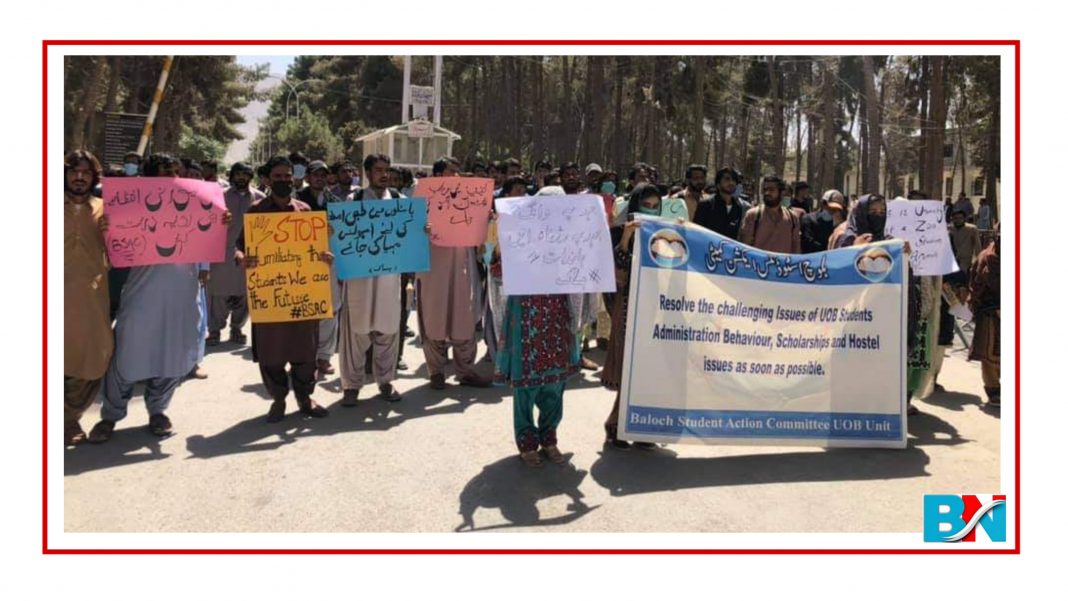 Quetta: Baloch Students Action Committee (UOB Unit) staged a protest against University of Balochistan administration at the campus on Tuesday.

The protesting students had a charter of demand in which issues related to scholarships (Ehsas, Need Base and BEEF), facilities for hostels, semester fees, rude behaviors of administration towards the students, internet, libraries, sports etcetera were included. After around four hours of sit-in protest in front of the main gate of the varsity, the students shifted their sit-in protest in front of the Administration Block to grab the attention of the vice chancellor.

The main issue of the students was of the scholarships. For the last two years, students were not offered with Need Base scholarships, announced by Higher Education Commission. The names of the students for BEEF were not referred to the office of BEEF from the administration. In reply, they complained of Higher Education Commission for not granting them the number of scholarships for Need Base. However, for BEEF the university authorities ensured to send the names of top ten students from each department very soon.

Coming to Ehsas scholarship, the varsity rendered half of the amount to some students which they say was a fault of students while filling their Ehsas scholarship forms online. The university asked the students, who have gotten half of their sum, to write a letter and give it to the administration and they would give the remaining part of their sum after they collect it from Ehsas team as soon as possible.

Besides this, the three blocks of boys hostel (block one, block two and block seventeen) are non-functional whereas one block of girls’ hostel is dysfunctional due to which more than five hundred students are in waiting list. All the students are from far-flung areas who are facing dilemmatic challenges of stay in Quetta. The administration told the students that block one and two of the boys hostel are non-functional due to their poor infrastructure for which tender has been issued. They would take some time to get recovered and block seventeen is for the Pakistan Studies department on which Higher Education Commission has the authority. Howbeit, some other students of the concerned departments are mixed with the other students of the other blocks in the hostel. The students demanded either the re-allotment of these students to their own block or to merge that block with the others.

The administration ensured opening the closed block of girls’ hostel within a week. Along with the functionality of the block, they also claimed to have given their ambulances to the hostel which they asked to catechise from the concerned person in the hostel and a letter, according to them, has also been forwarded to the Higher Education Commission for the construction of a healthcare hospital in the premise of the varsity.

Most dishearteningly, the administration was very tough towards the students who were demonstrating a peaceful protest. Firstly, they were restrained to get the loud speaker in due to which students had to put forward their reservations without a loud speaker. Later on, the security, who said to have come for the security of the students, adopted a rude and harsh behavior with the students by sitting inside the administration office. In such times, as provided by law, the police have to come and protect the students, but they attempted to disrupt the peaceful protest.

Protesters alleged that not only during the protest, but in general the administration, including the security, keeps a dictatorship-like behavior.

“Despite the fact that they exist in the university because the students exist, yet they behave as if they are superior and students are beggars in front of them. In some other situations, they are not even ready to listen to us. They must not forget that we are paying them for the services they are providing to us.”, said the protesters.

University of Balochistan is the mainstreamed university in the whole Balochistan which was established in 1970. Sadly, it has been made the hub of corruption, particularly for the last couple of years. For their tiny rights, students are made to demonstrate on the roads.

The UOB administration assured that the highlighted issues of students will be resolved within a period of one month.