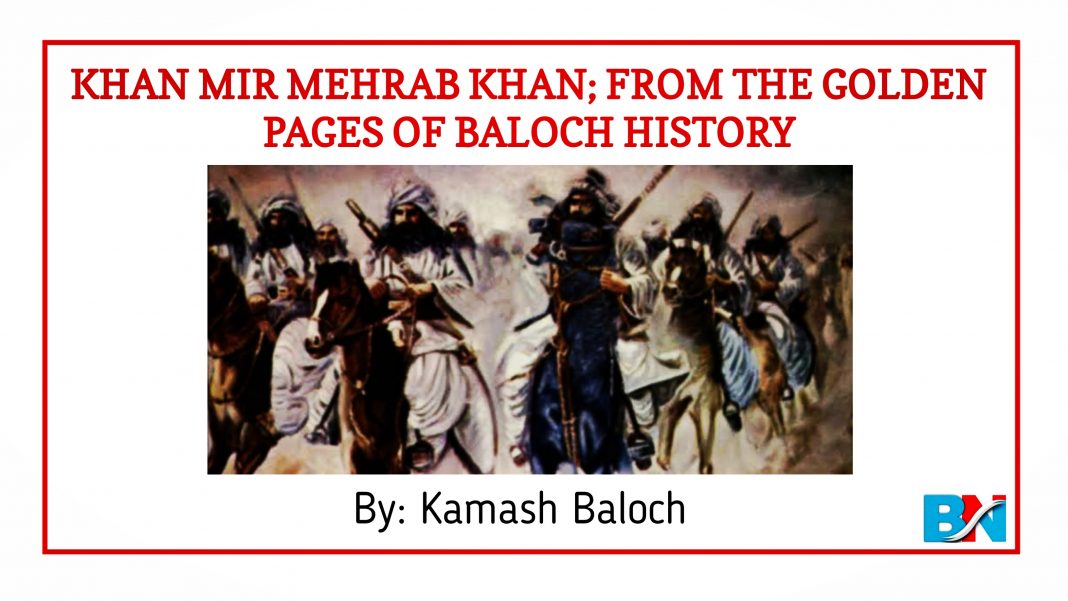 Baloch have always resisted against the external powers who tried to rule them. The history of known resistance begins from very earlier, but the notable history of resistance starts from Khan Mir Mehrab Khan who fought and sacrificed his life but did not bow down in front of the English rulers.

After that, he met with Maharaj Ranjeet Singh (the Sikh leader) and then with the British government. He wanted power and then he would accept slavery of Britishers. Shah Shujha and the British army marched towards Afghanistan to capture it. They chose the Kandahar route to enter into Afghanistan. And for that, they had to pass through Bolan pass. Before Bolan pass, they were to come through Sindh which was not a big issue for them as Sindh was under the control of British government.

On that end, the prince, Ameer Dost Mohammad Khan, who was aware of all this, left Afghanistan without fighting. After conquering Afghanistan, the governor general planned an attack on Kalat state. They sent a message to Khan Mir Mehrab Khan to surrender before the British government, but he chose the other way to fight in spite of bowing down to invader.

Many people in his constituency suggested Khan to surrender but he was never happy in giving away his and his nation’s freedom to strangers without even resisting. The Khan, although, knew that Britishers were very strong and powerful, they had modern weaponries and they recently successfully attacked and seized Afghanistan, but that could never let Khan to step back.

“It is my land. My forefathers have given sacrifices and gave us this beautiful land. I cannot leave this very easily. I will fight till my last breath but will not give away my freedom so easily. This is my land and I will give my blood to save each inch of my motherland.”

Mir Ahmed Yar Khan in his book writes, “As Khan heard that British is planning to attack on Balochistan, he sent a message to all the Sardars that come together and resist against the British troops. It is a jihad to save our motherland and fight for our independence. But the Sardars had already turned that way.”

Besides this, Gul Khan Naseer in his book “Tehreek-i-Balochistan” writes, “The British army was coming towards Kalat for the attack and the Sardars of Sarawan gave all the facilities to the British in Mastung. They (Sardars) themselves were sitting at homes like women.”

Khan Mir Mehrab Khan, with his small army, fought with the strong British troops. He was ready to die but not to give his motherland to strangers. He fought bravely and embraced martyrdom but could not digest slavery. It was November 13, 1839, when Khan Mehrab Khan got martyred after fighting hard with the Britishers.

Balochistan is the land of resistance. From time immemorial, the Baloch never quitted and stepped back whenever it came to their motherland. Even though Baloch were never equipped with modern technologies and weaponries, but they were stronger than many other states. The story of Khan Mir Mehrab Khan is a lesson to the Baloch that Baloch was not a nation who gave up in front of the strong enemies. He is alive in the golden pages of Baloch history for his bravery.