Home Articles Public Library: A hope for the youths of Makuran 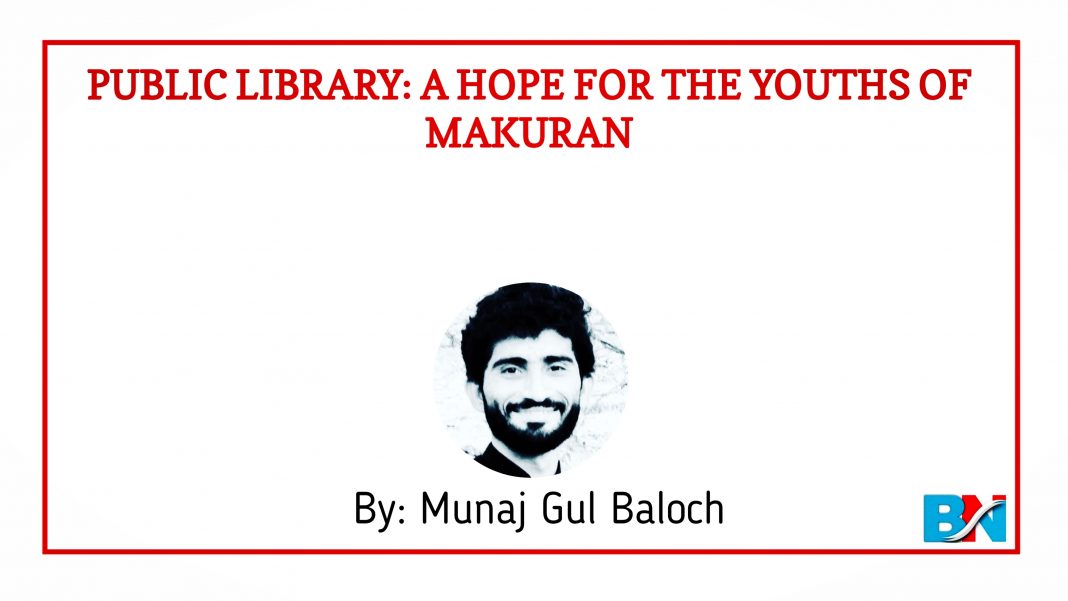 Dwelling in a place of intellectuals and still wailing for the establishment of an expedited public library makes the residents distraught. In fact, in Turbat a handful of students face a great many problems in the preparation of competitive examinations and other such studies owing to the closure of the single public library.

“A library is the soul of mind. It soothes one’s spirit and fills it with wisdom. Though having not a well-facilitated public library for a city is the first indication of a huge decline of a society towards prosperity and a peaceful living,” says Aziz Hasil, araduated student of English Literature at University of Turbat.

“Speaking frankly, Turbat has produced a great many gems and intellectuals. They are in prestigious positions, but most of them are dead-silent to cite a single line on the issue of reconstruction of the single public library,” Hasil adds.

The thought-provoking query is that our well-educated personalities are still asleep to assist the young generation in imparting them just and basic amenities.

“Owing to the closure of public library the reading environment of students of Turbat is unsettled and no access to internet has put more problems for students to study calmly,” says Zohaib Aslam, a recently graduated student from University of Turbat. “There should have been a separate library for girls and boys if the government wants the community well-facilitated and well-educated.”

Aslam believes that numerous students are mentally disturbed to study in house as a library provides a reading environment to the students. This single library is also not enough for a huge population.

“The unawareness of us (the masses) for the importance of education has driven us to a great loss in the twenty first century. Turbat City Development Project [TCDP] was established during the former chief minister, Dr. Abdul Malik’s government to work for the development of the city, but we witness no great educational development in the city,” says a law student [He wishes not to be named]. “As well as lack of accountability has worsened the situation of the city, therefore, the government has no policies to tackle the problems down.”

He believes that the delegation must have visited the area of public library to look up its issues. But all in vain.

According to the sources, most of books of public library were donated during the time of commissioner Pasund Khan. The books of the library are locked in the shelves since then. It is high time that we should work shoulder to shoulder so that the tree of education gets growing in the city rather than dying of thirst.

“In the city books and knowledge are locked in the shelves.”

The provincial government had better contributed books to the city and worked for the establishment of libraries to promote the reading culture. As by now, most of the students are somehow disconnected with their studies owing to the closure of the single library. The paucity of libraries in the city has been causing effects to the studies of the youths. The provincial government has to create libraries in the city. When the libraries are created, it will automatically beget the good and gives birth to ingenious and fecund minds.