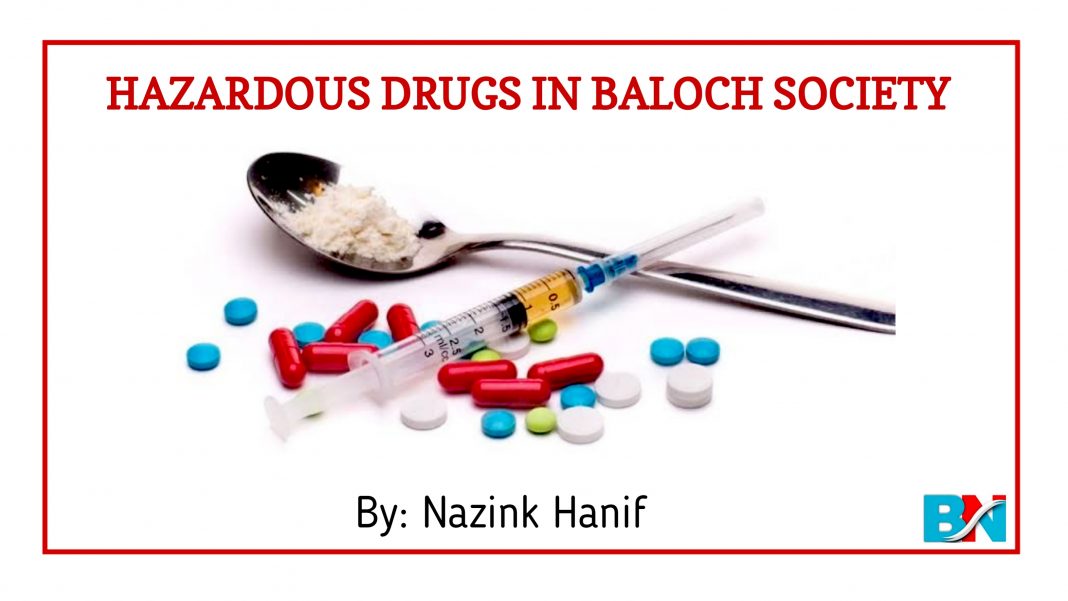 Baloch society has been victimized by drug addiction which is more attached to the teenagers who do not anymore feel secured in their own society. In fact, it causes several evil actions in which people feel physically ill. It is the symbol of changing normal mood. Drug addiction is such a hazardous disease which snatches the interests of the teenagers after which they start ignoring their responsibilities and other works.

Furthermore, Baloch are completely attached to their numerous physical and mental issues like drug users who are commonly increasing their blood pressures, conviviality, chest pain and many more. After all, they are decreasing their mental activeness. According to the symptoms, they are damaging their whole lives by being abnormal.

A drug addict, in our society, often chooses bad ways to earn money for his drugs. The other way includes injections which are used by drug addicts to avoid pain or control extreme pain due to less drugs. Once when injected, they do not know what is going around them. Even if they are beaten, they feel no touch on their bodies. In other words, life stops for them.

Sadly, drugs are getting a part of our social practices these days. Unfortunately, our own people are promoting the drug culture in the Baloch society who sell and have personal gains, no matter for them of the collective loss. They pay bribes to the law enforcement agencies after which no one hinders on their way to destroying the society.

No doubt, more accomodation of the drugs is the severe destruction of the society. Worst of all, the main primitive issue is once they are involved in drugs, they are unable to cease the use of drugs even they themselves wish to quit but they cannot. It gets itself rooted inside the soul which mostly leaves with the deaths of the drug addicts.

So, it becomes our collective responsibility to take serious and strong measures to curb the use and sell of drugs in our society. Although the government is failed to stop the supply of drugs, it is all the local population to socially boycott the drug dealers. Everyone knows who are inserting the drugs in the Baloch society. Until and unless we stood up against them, there is never an end to the dangerous drugs in the region.