Home Articles Corona Lockdown and Grievances of Students and Professionals 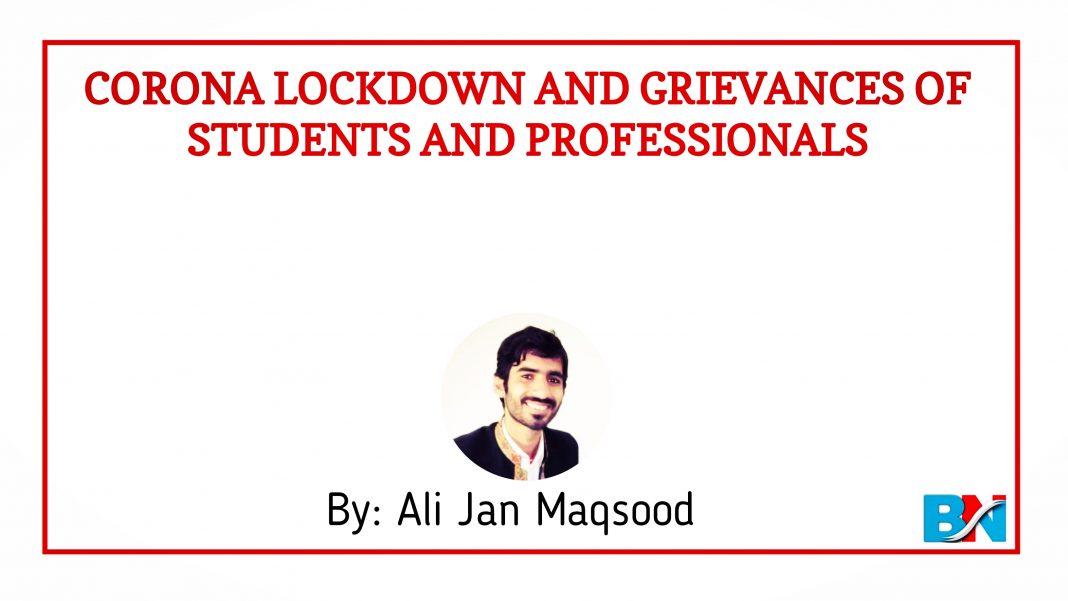 The district administrations of Kech and Gwadar (Makkuran) have imposed lockdowns in their districts owing to the growing cases of corona virus. However, the inter-city transportation has also been restricted as part of the lockdown, but most of the students of the given districts are either enrolled in institutions outside the districts or preparing for admissions or jobs outside the cities due to multiple crisis out there. The students turned to their homes to celebrate the holy occasion of Eid with their families, but a sudden declaration of lockdown has ceased them to move back to their institutions where studies have begun.

Not only students, commission, too, is supposed to conduct the interviews of qualified candidates for the posts of lecturership in the given week in which candidates from Turbat and Gwadar have also qualified, but the lockdown, if yet on as so, is supposed to take away from them their opportunity to get employed as well. Besides them, the tests of other posts are also to be conducted very soon, but how would the applied candidates appear when transportation is wholly sealed? They are afraid corona may not, but the governmental approach may put their lives in risks.

On the other hand, the offer letters of the Secondary School Teachers (SST) have come to Quetta city which they have to receive in person within ten days or else their names would be cut short of the lists. From them, many belong to Turbat and Gwadar, but the current lockdown does not allow them to travel to Quetta from Turbat to take their letters and secure their positions. Why do not the administrations look forward to their grievances if it is all being done for the people?

Here one wonders, if the district administrations are as much worried of the public, why would not they think of the students who may likely drop out from universities if they do not be present on time. Because in universities it is semester system in which if 70 percent attendance is not secured, students are not allowed to sit in papers, and the lockdowns in Turbat and Gwadar are most probably to make them miss their classes. Who would claim the responsibility if they are dropped out or not let to sit in papers?

If the district administrations are this bit serious with the people out there, why do not they look forward to possible solutions for citizens from all walks of life? Like, the administrations have the capacity to drop the students and professionals outside Makkuran so that they may rush to their destinations from there onwards. Because all the transportations inside Kech and Gwadar are restricted. In fact, the administrations are unconcerned about the careers of the students and jobs of the passed out candidates but only of their promotions.

With such gestures from the administrations, it seems like they are directly involved in destroying the education of the young students who are likely to be the backbones of the nation in the coming days. No doubt of the corona virus and its possible consequences, but does that mean to ruin the careers of the students? Is it to take away the “rarely-announced” job opportunities? Amidst such circumstances, the administrations ought to adopt a middle way to better and better solutions. Governmental transportation of the people in dire need would be the best of all with the Standard Operating Procedures (SOPs) fully followed.

It is although testing times for the local bodies but risking the careers of young students would have long-lasting impacts on national development. Not only this, but getting back to the same position would take so many years because once we are backed, it needs hundred more years to get back to the current status. They themselves say that without education nothing can be done and then they themselves restrict us to getting an education by either means.

On one side, the district administrations impose lockdowns and, on the other, most dishearteningly, the water and electricity crisis in Gwadar and Kech are taken to their peak. In fact, people in Gwadar have taken to roads in protest against the injustices on them. How would the local bodies justify them? Where is the care when the basic amenities as electricity and water are not provided to them? They say corona is deadly dangerous, why do not they solve the water and electricity issues so that they may remain inside their homes and not come outside. It is yet to observe in this week what the administrations decide, but any negative decision would risk in the jobs and educational careers of the people.