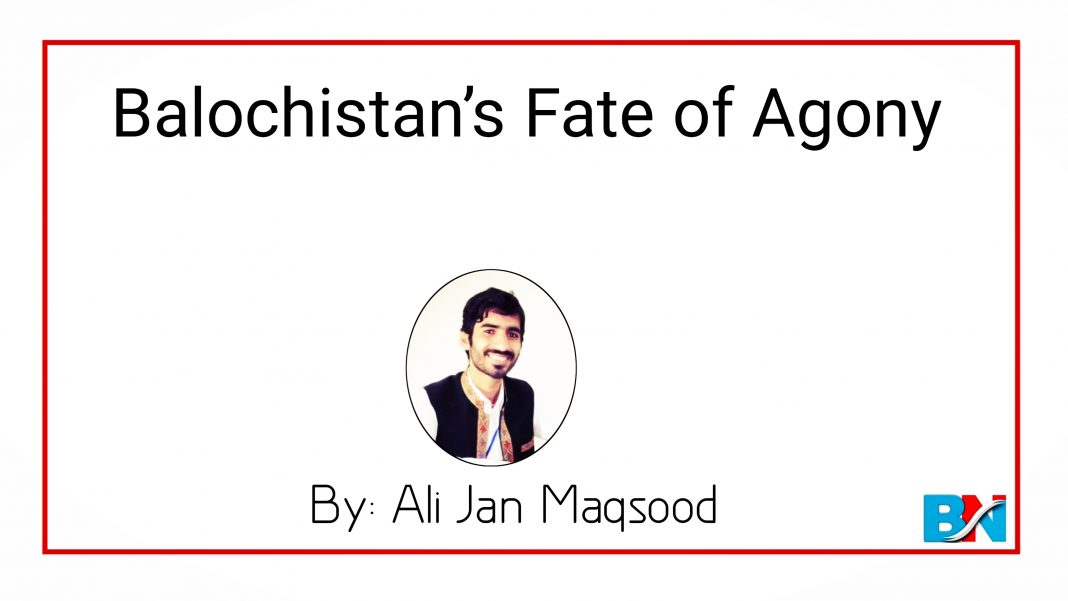 Last month, Hammal Zafar, the little son of a prominent Baloch poet Zafar Akbar, died of cancer after fighting for long. He was under treatment in Karachi due to lack of cancer hospital in Balochistan. His sudden demise left his family, nevertheless Balochistan, in grave astonishment. Had there been proper healthcare facilities in Balochistan, things would have been lot different, or maybe we have had not lost Hammal.

Balochistan is resourcefully Pakistan’s richest card, be it the sea water [also known as Baloch water], natural gas or the gold, copper and mining riches. The Pakistani state has always had its full control over the resources of the Baloch land. Although, amendment 18 of Pakistani constitution provided provincial autonomy to the provinces, it excluded the control of provinces towards their riches.

Earlier this month, a video went viral in social media where a little girl, from Sui [Dera Bugti], was begging. Upon the question of the person related to her belonging and cause of begging, she replied that they have come to Quetta long ago and beg to get food to survive. She was an out of school child from Sui, one of the richest towns of Balochistan. In Sui, she said, education is not for them. In an answer as to Eid’s clothes, she replied what would she do with new clothes, when getting food was their gravest dilemma and sole priority at that meantime.

Besides this, Eid and other holy rituals are never celebrated here in Balochistan. Because they are celebrated when the beloveds or family members are present. Sadly, one cannot find a single village or town in Balochistan which is not affected with missing persons. In fact, holy ceremonies like that of Eid are spent in protests of the grieved families on roads.

On this Eid Ul Fitr on May 13, when all the Muslim world was celebrating Eid, Baloch families were in protest in front Quetta Press Club for the safe release of their beloveds who have been missing for years. Some hapless mothers had, in fact, bought the Eid clothes and shoes of their beloveds and brought them in the protest in the sole hope that their sons would get released, but their hope despaired with the fall of sun. And they again missed the joyous Eid with painful tears.

Balochistan’s history is ancient. Since the occupation of the Britishers [1839] of the Baloch land, the people in this part of the world are going through challenging times. In fact, Balochistan’s annexation with the newly established state of Pakistan in 1948 could not save the fate of the Baloch people. The recent governments have also failed to work on prosperity of Balochistan and take it to new heights of advancement. Had Balochistan’s riches been spent on the development of the region, Balochistan could have been in a different level today.