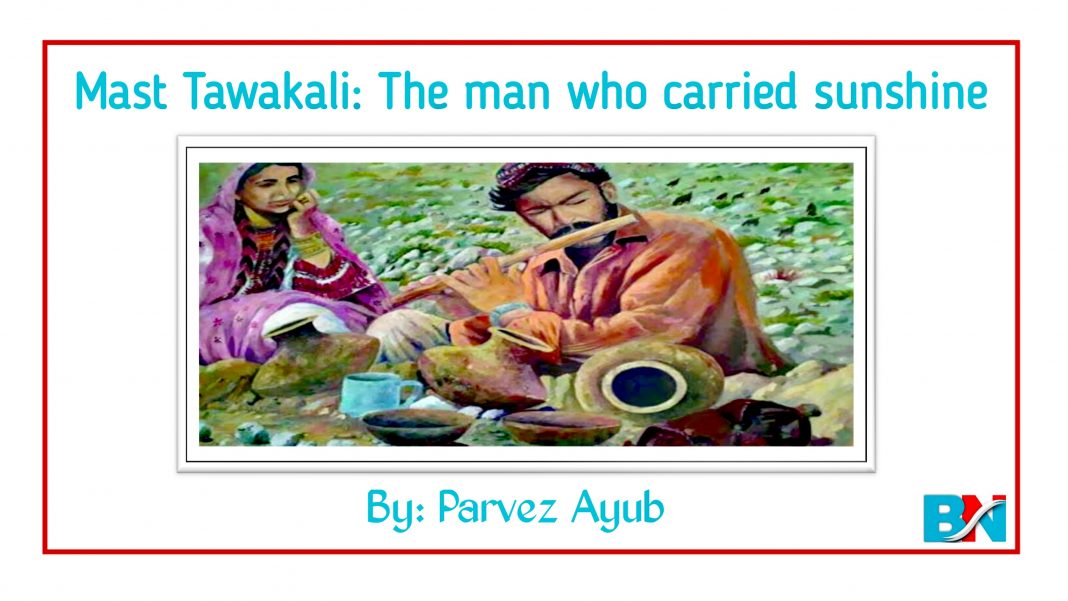 The South Asian countries have a very rich tradition and culture. Many cultures are represented and known for their rich literature. The rich soil of Balochistan has allotted gargantuan space to many poets, writers, and scholars. It has also become home of many mystic poets who were renowned people of their age. They were multi-talented people; at a time they performed as poets and at a time they were Sufis and saints. The serene beauty of Pakistan embodies work of Baba Bulleh Shah, Mullana Jalal Uddin Rumi.

Comparably, Balochistan has also graceful people who are accompanied with their flawless styles in Literature. Mast Tawakali is one of those magnanimous souls who stood incessant during those days and stands alive even today. Mast Twakali was basically a Shepherded and he was entitled as Sohrab by his father. Soon, he marked the history with his name in literature and gave a new dimension to arts in Balochistan.

One day, as he was walking towards the fields, he experienced a harsh weather. In order to safeguard himself, he sought shelter in a nearby hamlet. Sammo was the name of that pure soul who provided shelter to the owner of her feelings. He became obsessed with that hamlet and began rambling near it every day for a glimpse of his beloved.

The villagers momentarily noted this routine and reacted harsh with Twakali.They ordered him not to visit the hamlet anymore. But then, the harshness of the people and wildness of the weather did not have any affect over his feelings. Tawakali did not listen their orders and Villagers left that village forever. It was a calamity for Twakali as it was only the glimpse of his beloved that invited him to visit the village and hamlet. He was helpless then and started praying for Sammo. People of the village tried vain attempts to kill Twakali physically but his divine connection and purity of soul protected him every time.

He contributed to the field of literature by writing down his secret throbbings into jewelries of words. Unlike other Sufis Mast Tawakali was also deeply moved by the divine force. He was a lover too, a true profound lover of his time. With the passage of time, Tawakali observed a strangely sentimental feeling and that feeling helped him sow the seeds of the sacred feeling of love.Twakali wrote exquisite poetry in love of God and Sammo; with giving them the taste of romanticism. Mast Tawakali was a man of rare personal qualities.

Mast was really a mystic, and a great lover. -Dr. Shah Muhammad Mari

In order to give him wide recognition, there should be initiatives to promote his work. His poetries should be translated into other languages to extend the field of literature.

Forlornly, Shah Muhammad Marri has only toiled to keep him alive by writing about him in a book. The students of literature should try to work on such areas and pick their legends. They should write comparative analysis over them and research about their works. It is a devastating fact that students hardly ever found information on internet about the poets, writers and artists of Balochistan.

Students should be convinced to write upon them and research about them. It is also a state of honor that Mast Tawakali was awarded posthumously by Pakistan Academy of Letters which is an effort to keep his name alive and evergreen.

His words still remain sweet and undefeated in terms of poetry.

Oh, could float over Loralai for a short while

Over the tomb of shams and rain upon faqeer’s sheer

The lightning struck and the cloud moves toward the barren land

Come in the night with thy happy-tidings

Form a Carwaan like camels over the hill, Mantar

Over the hills of Kapadi formed an umbrella

With smog and fog the dark black could thundered

The cloud whispers and climbs over hills

And quench the thirst of Cheetial deer

the deer in Seemar become thirsty and waiting for raindrops

The could forms in dusk

Floats hither and thither over the lush green vales

Drizzling, drizzling thou come, l know where thou supposed to rain

Come, let me show thou my beloved’s mighty tent

Come, pouring and pouring Gorband all way through Cantras.

Attack on Samoo’s stone-made house before she migrates

Fill the naked plains with thy blessings

I will be content when cloud turned toward Dantar

And water the fertile land of Rasthrani hill

The cloud arrives in hill of Thada

And quench the quest of sheep in MAST’s pound

Thou become guest in Kahan for whole night

And enveloped the whole city of Bamboor

When after each rain the novel grass grow

The drizzling raindrops sound sweet and in the night

Thus, the hands should break which stop flowing water to inter the tent.

Some rain must fall to make MAST happy,

And make ever- green boughs of home grown Lemon like Zamur