Home Articles Unemployment; the root cause of all social evils 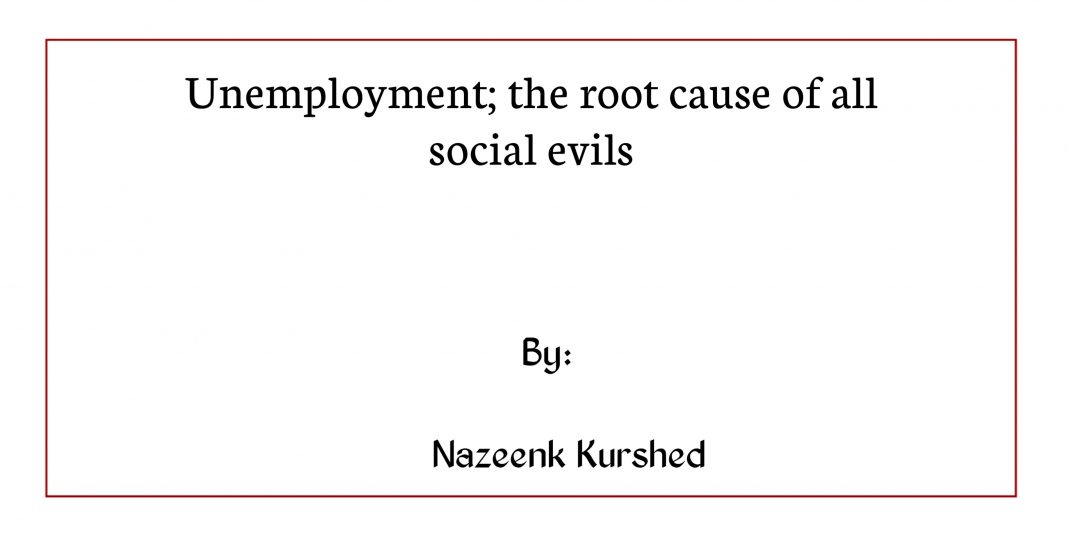 Unemployment is the root cause of poverty and backwardness of youths in our country. Besides, youths are the backbone of a nation_ nevertheless, they are the nation-builders_ but are lagging job opportunities to earn a livelihood for feeding their families and supporting the country economically.

Unfortunately, a large number of graduated youths, when they get no job from the government, join laboring workshops and garages for an earning. Sadly, the other uneducated youths, through recommendations and influence, take over the positions who neither need the jobs nor deserve that.

How misfortune it is for a state whose literate and deserving youths are gatekeepers, drain cleaners, drug dealers, smugglers, labours and the pathetic youths have seized all the governmental positions due to power. It is because posts in this country are sold.

Secondly, unemployment is the fundamental reason which enhances the ratio of poverty. An estimated percentage of 62% population in Pakistan are living below the poverty line, which is sickening.

More worrisomely, females in Balochistan start embroidery, whereas, males, if fail to secure a private job, get into the fatal drug addiction. It brings about an unhealthy environment in most societies and influences negatively the other youngsters of the towns. Some other times, the unemployed youths get deep into depression and end up with suicide.

Covering the actual point as to why most students are surrounded with suicidal thoughts is, they spend more than sixteen years in getting an education, investing lakhs, be it a middle-class student or rich, and get nothing of their this much investment of time and money. Frustration grows inside them which gradually drags them towards suicidal quests. The only and easiest solution they get at that very moment is ending all the problems with suicide.

With such an unending chain of unemployment, the state likely loses its gems who are to do a lot for national advancement. The root cause of all other evils in our country is unemployment and negative influence on governmental structure.

A country can go weakest if there appears dearth of employed citizens_ that too if the well-deserved citizens are left ignored. Eventually, we urge to the government to take solid steps to provide opportunities to the youths, who are our nation-builders.

It is the need of hour to facilitate the youths to perform their social duties enthusiastically and bring about positive changes in the society. A short delay may collapse the entire developing structure of the country.