Home Articles Balochistan under the shadow of ‘The Great Game’ 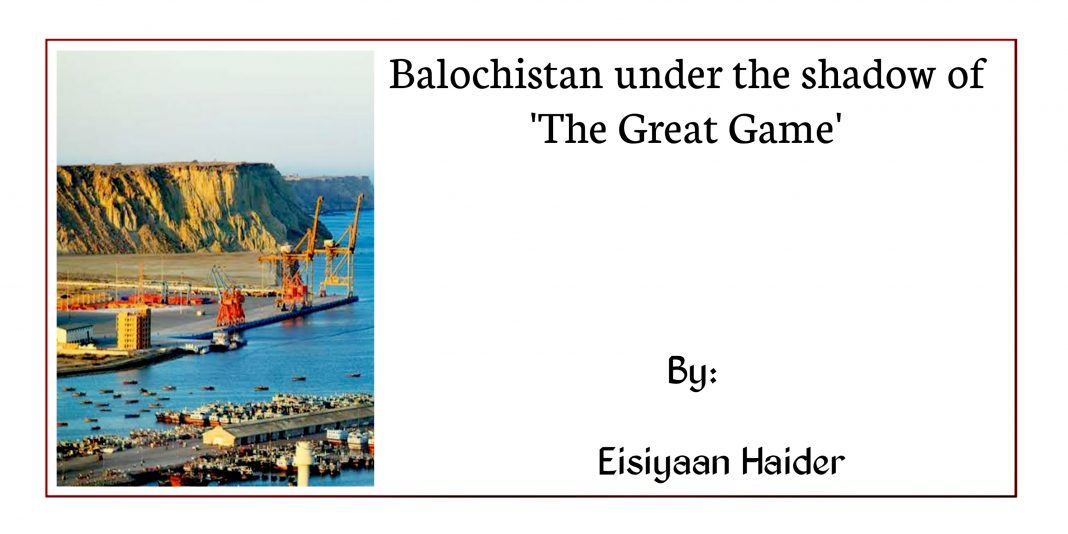 Balochistan acquires a very pain-gained history, sorrowfully, unknown to many Baloch of the present age. The territory has been under multiple evils’ eyes for its strong strategical location, featuring mountains and the Arabian sea [also termed as The Baloch sea].

“Great Game” was, however, a struggle being played in central Asia by Russia, France and England. It was regarded a hazardous game that had its planning in eighteenth century.

Since the time of Perter, The Great, Russians were desperately looking for an access to warm water which they considered fundamental in the fulfillment of colonial ambitions. The Russians, in fact, concentrated on central Asia to find a route to the Persian gulf to reach out to warm water that could be the gateway to the Indian ocean.

In this era, the regions under colonial system of United Kingdom were the most populated that included gulf, East and South Asia, South America and, most importantly, Indian ocean, a great trade and commerce route which owned unlimited natural resources including 75% of world oil producing system.

England, in 1776, encountered a great outbreak and lost America. After losing the great possession of America, the imperialist British owned threat of not losing Indian ocean that imperial Russia was attempting to reach out.

To protect his interests, UK opted to make an alliance system in Afghanistan to prevent Russian power. During the first decade of 19th century, Afghanistan was engulfed in a power struggle. So, in 1909, Shah Shujah, an agent of England and friend of Ranjeet Singh (ruler of Sikhs and Punjab) ruled over Afghan regions for defence.

In 1838, a man, Ameer Dost Muhammad, revolted and defeated Shah Shujah to rule Afghanistan. He, with his ruling authority, recovered Peshawar, a strategic location that contained both Kashmir and Khyber passage.

Balochistan, during this period, was under the kingship of Mir Mehrab Khan.
British realized the importance of Balochistan only when they required safe passes for the invasion of southern Afghanistan through Balochistan.
To own the support of Afghan King, England held a meeting.

England, for the protection of his interests, sent his agents to have a meeting with Dost Muhammad. The reason behind this was to seek Afghan support for stopping Russian power to reach out to Indian ocean and Central Asian regions.

Dost Muhammad, in return, was to be given financial aid with a boasted up military strength. But with wisdom, Dost Muhammad stated that he might agree with England if Khyber pass and Kashmir would be recognized as the territories of Afghanistan. But England disagreed and continued a war against Dost Muhammad.

To invade Afghanistan, UK wanted to capture the suitable port of Jiwani. British had already acquired Karachi port in 1820. They would further reach Afghanistan by using the land of Balochistan.

Uk sent Sir Alexander Burners, an agent of British in Balochistan. An agreement arrived in March 1839 which guaranteed the sovereignty and borders of Kalat responsible for the safe passage of provision of British troops in return for 15,000 rupees annually.

The fundamental objectives of British to enter into a treaty-relation with Kalat was to provide a safe passage and supplies of the Army of Indus on its way to Kandahar through bolan pass, Quetta etc.

The army of Indus began the March towards Afghanistan to replace Dost Muhammad with Shah Shujah. They encountered tough challenges when they reached kachchi and passing through bolan pass as they were attacked by the Dombiki tribe of Baloch.

British held Mehrab Khan responsible for this violation. British commander Alexandr Burners and Shahan Shujah used harsh words against him for the matters and conditions. The king tried to diffuse the situations by sending the Minister Mullah Muhammad Akhund Hussan.

But he incited the British against the Khan and made the British officials believe that Khan was secretly asking the tribes to make hurdles for the Army.
Khan, on his behalf, resolved the issues and cleared the ways of army to reach out there. These were all the leading causes of the occupation of Kalat.

Right after these situations, the king with Kalat faced many issues when British declared martyrdom of Khan to punish the King because of not acting accordingly as to the treaty of 1839. So, the war broke out between the brave Khan of Kalat with 400 armymen, meanwhile, the army of British was composed of 1050 soldiers. Mir Mehrab Khan lost the battle because of lack of standard weapons alike the enemies had and faced martyrdom on November 13, 1839, getting himself a honourable place in the pages of Baloch history.