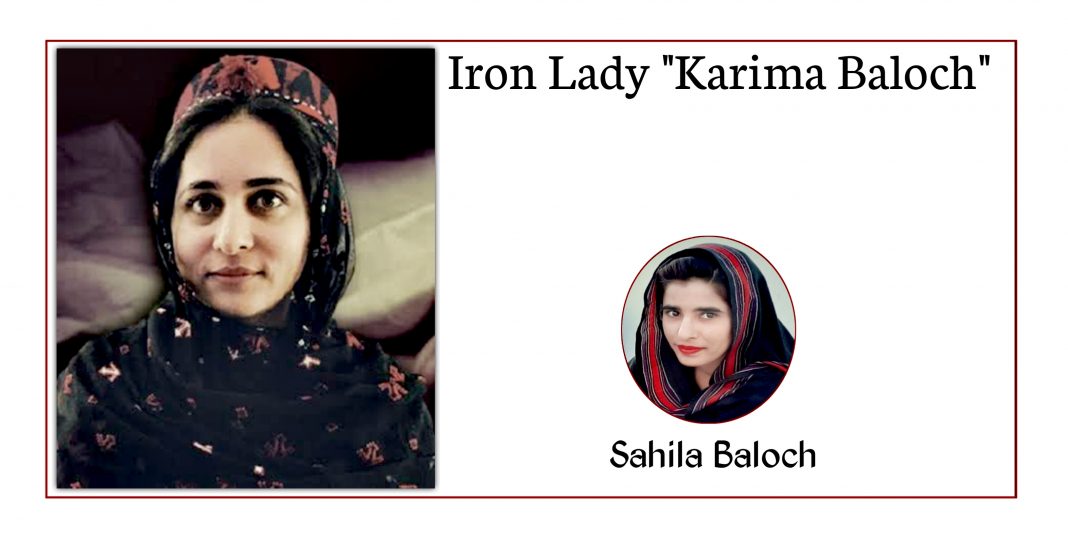 Whenever history of Balochistan will be written, Banuk Karima Baloch’s name will be written with golden words. Her struggle, and of course she herself, are immortal. She is the symbol of resistance who fought against unfair and unjust behaviors towards the Baloch nation. She resisted till her last breath for her people.

Basically, she appeared in 2005 in Turbat when she spoke for the Baloch missing persons in a protest. She talked of the human rights violation, forced disappearances, looting of houses, conversion of schools into check-posts, media blackout and crimes in the streets of Balochistan.

Karima was a Baloch activist from Tump, Balochistan. Gradually, she painted students’ politics with her unending efforts. She spoke about abduction of innocent Baloch people. She entered into politics for her downtrodden people, to represent them and be their voice.

In 2006, she became the member of central committee of Baloch Students Organization (Azad). In 2009, BSO’s junior vice chairman, Zakir Majeed got abducted, leading her to hold the responsibility as junior vice Chairperson of the organization. Like this, in 2014 when Chairman of BSO, Zahid Baloch went missing, she was given the charge of being the first ever female chairperson of Baloch Students Organization (Azad).

In the given conditions and phases of her life, she received severe threats. Her home was raided several times and mortared. Multiple times, she was victimized and irritated so that she ceases whatever she was doing for her people, but she was never going to stop out there.

Even though, two cases of anti-terrorism were filed against her. Once in a hearing, the court stated, “You are a female and hence your punishment is half forsaken as cooperation,” but she refused and replied: “I don’t need privilege, so be equal.” This shows how she was a strong ambassador of equality.

On a similar account, she faced multifold barriers on her way; her ideological partners were abducted and some of whose dead bodies were thrown. Everything was attempted to cut off her wings, but she was not easily going to quit. Lastly, in 2016, she immigrated to Canada so that she could work for the Baloch cause without any interruption.

However, she also received multiple threats in Canada, which grew a sense of insecurity for her in that part of the world. Unfortunately, she went missing on Sunday (21 December) around 3 PM. In December 22, her dead body was recovered in Harbourfront near Toronto’s Lakeshore.

The Toronto Police declared her death not a foul play, but the entire Baloch nation knows the backstage story. She was a visionary leader and leaders never commit suicide out of their own, but they bring into the book the revolution.

Besides an activist, Karima Baloch was a daughter, a mother, a wife and a visionary leader. Her loss is irreplaceable. Not only for Baloch nation, but the entire oppressed nations of the world lost a massive voice, because Karima Baloch spoke for all the oppressed nations. She orphaned humanity with her sudden and early leave. But her sacrifice shall never go in vain. Her ideology lives on and continues to guides her comrades.