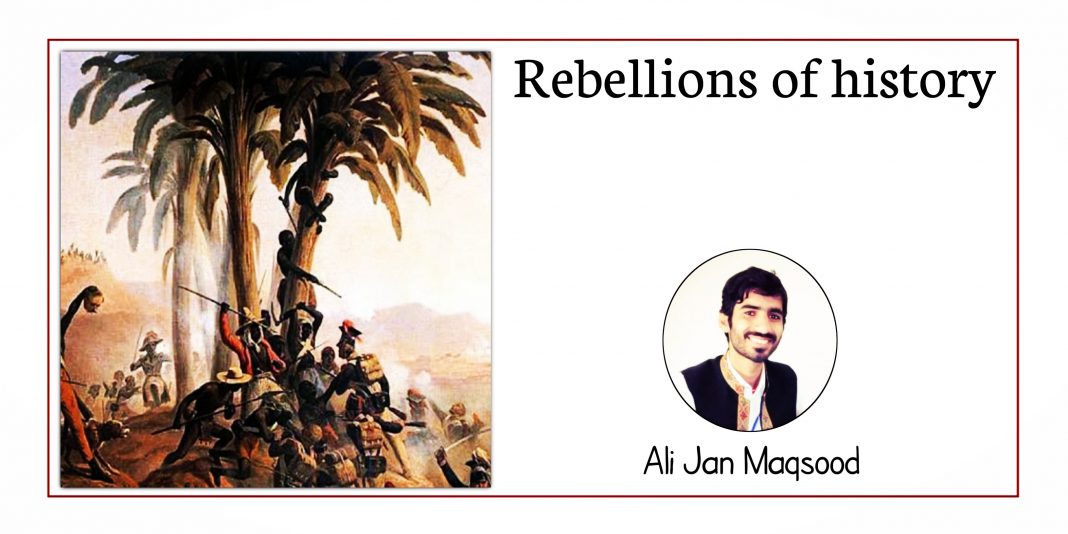 It was seventeenth century. Everything seemed tough that day in their village. Things were not turning out in their way. Villagers were losing their consciousness on daily basis, and no one could do anything about that. It had not rained for last three years. They hardly had anything to eat. Animals were dying. Everyone was hapless. They could not see a spark of hope anywhere around.

Waja Nawab (The head of the village): I think we should ask Sardar to render us grain or else we will die.

Yagi (A rebel): I don’t think we should.

Waja Nawab : And why shouldn’t we?

Yagi : And why should we bridge a gap between our freedom and us for the only cause of staying alive? A life without freedom doesn’t count, Waja.

Waja Nawab : But we can restore our freedom once we overcome the draught.

Yagi : Do you really think we can? (He looked straight into the eyes of Waja Nawab, but he had no answer to Yagi’s quest.)

The draught continued for several more months, and there were no signs of rainfall. Everyone was eyeing at Waja Nawab to do something for them, and he had the only option; to exchange grain with freedom to get them a life, but Yagi was strongly against it.

Waja Nawab: I think we are doing a mistake by not asking Sardar for grain. Other villages have done so and are living happily then……

Yagi : Then what, Waja Nawab? Should we also be coward like them and get our mountains, jungle, oasis and birds caged along with ourselves? Rain comes soon and unless it comes, we will survive in either way. We can live without food but not without freedom, Waja.

Waja Nawab: I am in favor of Sardar. If anyone else is against, should raise their hands.

Yagi and his four friends (Balach, Meeran, Jadain and Bakhshi) raised their hands, whereas, rest of the villagers kept their hands and eyes down. They had no other choice to save their lives other than giving away their freedom to Sardar. Yagi looked at them and their eyes with pain in his eyes.

Yagi : Baloch have never been this coward.

Shambay (An elderly villager): My son, we are helpless. What does it mean to be a Baloch if we ourselves are not alive?

Yagi : Waja, Baloch means strugglers; it is not today that Baloch are facing this bit of tough times, we faced even harder times in past. Did we die? History witnesses Baloch have never knelt down for life.

Shambay : My son, history is only in pages. Things were never as you say.

Yagi : Things were never so, or you fear for death, respected Waja?

With Yagi’s question, he had no answer. Yagi announced that he would never accept the slavery of Sardar. He also warned them if they accepted, he would fight Sardar in war. Before leaving he said;

Yagi : Waja Nawab, when your hands are tied with strong chains of slavery, everything else would be too. You can’t even die your own death unless your Sardar wants. Think twice before doing anything.

When he went, villagers decided to ask Sardar for grains. They called Yagi a “mad”. Nothing seemed as important as giving the villagers a life. The very next hour, a group of elderly villagers went to Sardar and asked him for grains. On the other hand, Yagi and his group turned to jungle. They were never happy with this decision and hence decided to revolt against them.

After three months, clouds came from nowhere. It rained and rained and rained, bringing a feeling of merriness among the villagers. They were glad that they would give away their slavery and be free as they were earlier.

Waja Nawab : I told you earlier it won’t affect us. If we had listened to Yagi then we would not be alive.

Shambay: Yes, Waja. You are absolutely right. He said we would not be able to restore our freedom. Look, God himself is giving us freedom from Sardar. I think we should go to Sardar and end the contract.

The next day when they were ready to leave, Sardar had already sent his sepoys to besiege the villagers. No one was allowed to go out of the village without his permission. Every action of the villagers had required the permission of Sardar. They could not even gather in a group freely.

The villagers begged to Sardar for restoring their freedom, but he disgraced them with his stormy and abusive words. They knew their sun of freedom had sunk deeply into the ocean of slavery. They had lost all their hopes and kept vociferating loudly looking at the sky for the mistake they had done. They wanted a miracle to happen for them.

And suddenly, the news spread that rebellions had attacked on the sepoys and killed two which brought a spark of hope among the villagers. The rebellions wrote a note on a big stone for Sardar:

“The War has just begun”

Sardar : Who are they? How could they attack?

Wazeer : Sardar, they are rebellions. Their leader is Yagi and they are against your rule in the village.

Sardar : Against my rule? Did anyone exist fighting against me?

Wazeer : They are a group of some young lads; mad.

Sardar ordered his entire sepoys to enter into the jungle and arrest the rebellions. On the other hand, the rebellions had increased in number. More of the villagers joined the rebellions from that side where two sepoys were killed. In a short span of time, the number of rebellions increased.

Yagi : Now we own a strong army. Let the dogs of Sardar come. We are ready. Long live revolution. (The entire rebellions enchanted with Yagi).

Sepoys planned to engulf the jungle from the four sides. To their misfortune, rebellions had already taken over the jungle and the entrances. The sepoys kept coming, and rebellions kept killing them. In short, it was a guerrilla war going on. Sardar’s sepoys felt deep in confusion how it was all happening. They ran. The rebellions rejoiced with freedom.

Kamalan (the head of Sardar’s sepoys): Sardar, rebellions are hard to defeat. Better we leave this village otherwise their interference in other villages would leave us entirely devastated.

Sardar : What rubbish are you speaking?

Wazeer : Sardar, I agree with Kamalan. It is not the right time to fight them.

Sardar thought for some times and concluded;

The entire villagers gathered. They paid serious tributes to the rebellions_ specially to Yagi and his courage. Waja Nawab was sorry for his coward decision of giving away their freedom. He offered Yagi to lead the affairs of the village, but Yagi refused.

Yagi : Waja Nawab, you are our elder. It is not that we are against you, but when you compromise with our freedom, we forget your status and position.

Waja Nawab : It will never happen again. We will fight together against all those interfering in our freedom.

Yagi and his group turned towards jungle because they still had doubts on Sardar. He promised to guard the village from Sardar and any other third party trying to interfere in their freedom. All the villagers again breathed in the fresh air of freedom. They realized how hard it was to be unfree and promised themselves to die but never render their freedom.