Home Articles A cry for Justice 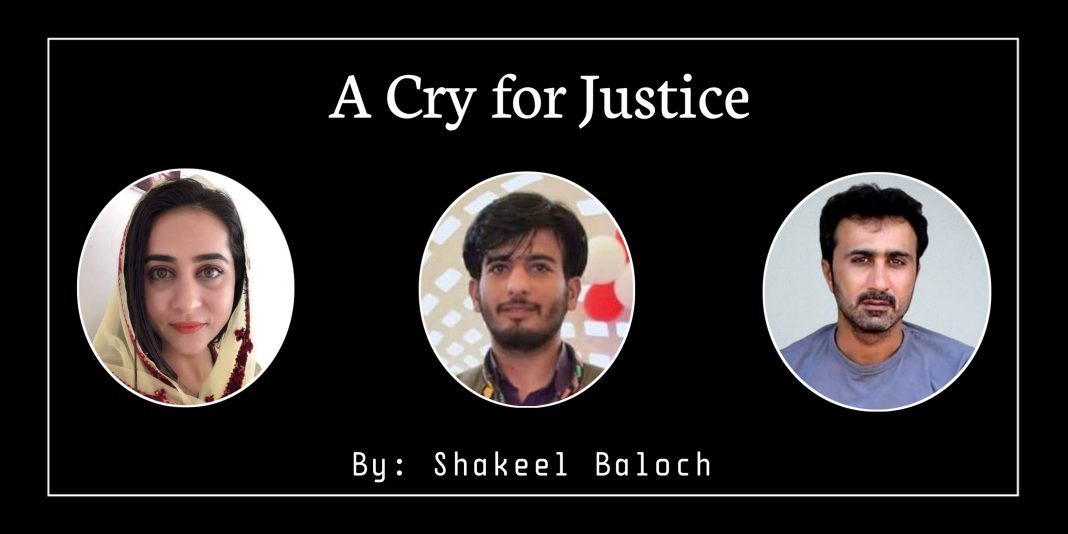 The continuation of illicit killings and disappearances unquestionably indicate how unprotected and neglected the Balochs’ lives are to survive, not only in Pakistan but in every corner of the world. Balochistan, undoubtedly, undergoes from multiple undemocratic and unlawful practices and being entirely deprived from fundamental and legal rights, lifting the nation to bleed and cry for justice, but the worst ongoing inhumane conditions seem as if protection of our rights is an out of syllabus task.

Extrajudicial killings of the civilians like Hayat Mirza, forceful abduction of Sajid Hussain, the editor-in-chief of Balochistan Times from Sweden and the recent cold-blooded murder of prominent Baloch leader Banuk Karima Baloch in Toronto, Canada, made the circumstances worst. Balochistan has only been receiving the sequence of dead bodies instead of justice, rights and development.

Banuk Karima Baloch was warned and threatened; however, she left Pakistan in 2015 and had been living as a refugee in Canada. She talked about the basic rights of Balochs and raised her voice against the injustice and unlawful acts which have snatched the legal rights of the people in Balochistan. As living in a democratic state, everyone has gotten the liberty to speak up for his/her fundamental rights to live peacefully; Sajid Hussain, including Banuk Karima, lived in a democratic state. They should have been listened to instead of forcing them to immigrate; later on, they are disapeared and killed even in foreign countries. What a paradox!

Just feel, how unbearable it was when culprits fearlessly shot at a 4 year-old child (Bramsh) and killed her mother for the purpose of robbery! Painfully, the state’s security forces seemed failed to catch the robbers, even though after each kilometer there exists a check-post.

What an inhumane act it was to drag an innocent student (Hayat Baloch) forcefully and shot him dead in front of his helpless parents calling it a ‘mistake’. And later, the sudden disappearances of Sajjid Hussain from Sweden and Baloch Activist Banuk Karima Baloch from Toronto, Canada. Worrisomely, we are not safe anywhere in the world, bugger off our homes.

What seems good when a liberal constitution is failed to secure the most basic of whole liberties; the liberty of person to live peacefully and speak fearlessly about the fundamental rights in the state? What seems good in a democratic state that seems unsuccessful to protect the constitutional rights of its people?

From several decades, the public have been protesting for their rights to be protected and demanding for justice, peace and protection within the province, but their raised voices go unfocused and unheard by the government. It is the obligatory duty of state’s security agencies to provide us peace, not to torture and kill its citizens.

It is about time every Baloch stood up and raised voices for demanding justice, peace, equality, legal and fundamental rights.

The Canadian government should continue the legal investigation to arrest the culprits and strictly punish them. The administration of justice system has to provide justice to Banuk Karima and other Balochs. We need justice, protection and a peaceful place to live in the world. We stand for Bramsh, Sajid Hussain, Hayat Baloch and Banuk Karim Baloch to seek justice at any rate.