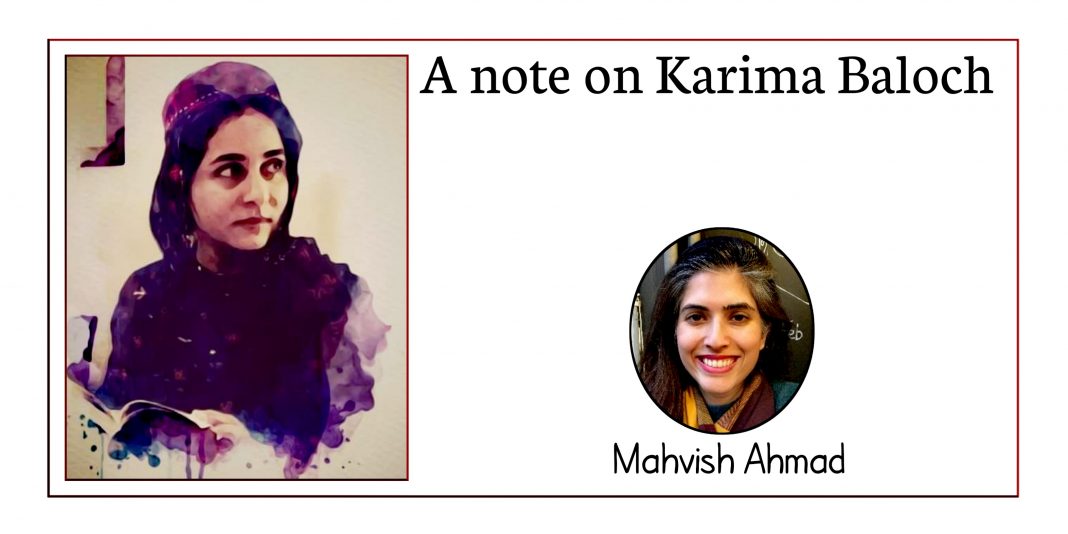 I first heard about Karima Baloch over ten years ago. As the chairperson of the most important student organisation in Balochistan – the BSO-Azaad – she was mobilising a generation of young girls on the frontlines of Baloch nationalist politics.

Young girls told me how they looked up to her. She would travel Balochistan convincing them to join the struggle, sometimes traveling to their homes to win over their parents, one told me, with ease and charm. She convinced them of the power they realised they had all along.

The best thing about Karima is that she doesn’t just create members, she creates families. She goes over to each member’s house and wins over the entire home! She becomes their daughter, they become one–and then our families say we can join if Karima comes with us!

A student reeling after the abduction, torture, killing of her friend Raza Jehangir–Karima’s comrade in the BSO-Azaad leadership–once said: “After Raza, I was completely broken. I had become strange. I stopped laughing. I stopped everything. Then Karima brought me hope, life.”

Karima, like this young girl, was close to Raza, and over the years she would live to see many friends taken from her in the brutal policies of the Pakistani military state. Amidst all this, the young girl was moved by Karima’s resolve amidst loss:

“Karima said: Death comes to us all but today we live. Alive we must do something. Be for someone. How long will we be mafaad parast, dedicated only to personal profit? Be only for our own children? Live for other people’s children. Then you’ll know what it is to be alive!”

My first meeting with Karima was ten years ago in Karachi. BSO-Azaad was still legal but threats had forced her underground. I remember a young boy picking me up on a motorbike to take me on a circuitous routes to his leader, a 27-year old girl whose movement had shook the state.

BSO-Azaad was banned in 2013. She witnessed more comrades being disappeared, tortured, executed. She was still waiting for their bodies to return so their families could have the dignity of a burial, but the violence forced her to leave her beloved Balochistan.

A few years ago, I visited Karima’s home. Her sister said she’d circle the courtyard on her last nights there. “She bid farewell to every wall, every corner, every nook. She said goodbye to this land.” She also said goodbye to her sisters and her mother who politicised her.

Stories about politics are often told as stories about men who teach men. In Karima’s case, her mother was her most important political teacher, her sister said. And though she had no children, she became a lumma, a mother, to the girls she inspired.

Her death has shook us all to the core. 7 months after Sajid Hussain was found dead in Sweden we are all finding it hard to believe it was a suicide. Her family deserve not to live with the ambiguity that has surrounded too many Baloch deaths, for too many years.

Karima is no longer with us but her legacy lives on in the lives of the countless young girls, boys whose lives she touched, marked. Her spirit lives on. Much solidarity to all who loved her, and my sisters, brothers, sangat in Balochistan.