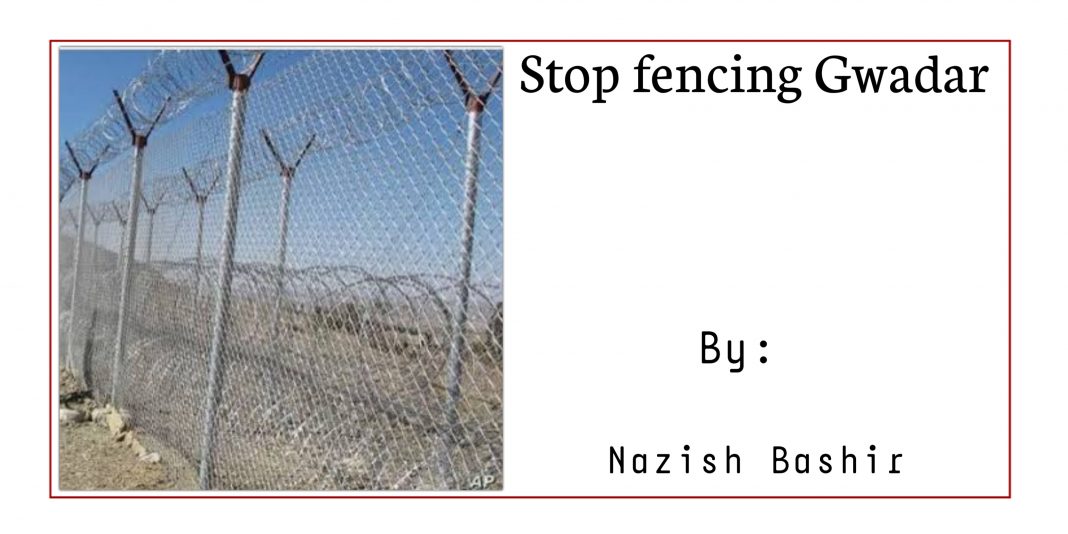 It is an evil when I heared the news that the claimants try to change the destiny of Balochistan through China Pakistan Economic Corridor (CPEC). However, they have, very recently, got to the conclusion that Gwadar, the city which owns Pakistan’s biggest project, China Pakistan Economic Corridor [CPEC], would be left fenced on the ground of security challenges, whereupon, locals of Balochistan have been barred from entering in the city. China, the investor of CPEC, supervises the fencing of the city through their billions-invested project by violating the basic rights of the locals. They [Pakistan and China] claim that it would be a part of development, which a common man can even comprehend is not.

Very sadly, the other important sectors where the governments of both of the countries are to work are getting no touch. Water scarcity has troubled the city more, which is left ignored.

Worrisomely, the inhabitants of Gwadar do not have access to clean drinking water, yet the government is squandering the funds on fencing the city. Sorrowfully, the project used to benefit their own interests, which entirely opposes the public and their living circumstances. There is no share for Gwadar’s residents who are the real owners of the land.

Furthermore, Akhtar Mangal of BNP (Mengal) said in his statement, “Gwadar is being divided like east and west Germany. The people are being evicted; the fishermen are no longer allowed to enter the region. It is not that we are against development, but we will not accept development that costs our existence, identity, language. Every citizen should be considered an equal citizen.”

We have every right to resist fencing which is illogical. It is like caging the city. Human rights organisations should also resist such brazen fascist steps in Balochistan. Gwadar is a popular city of Balochistan. It is the center of business in our country but people of Gwadar are dying due to a great many reasons; fencing the city can cause multiple other correlated issues, too.

As Gwadar is giving a lot to Pakistan, what is it getting in return? Most of the political leaders have visited the port city, why don’t they work on providing the city with basic amenities other than fencing it? In short, fencing Gwadar is never accepted_ not at any cost.