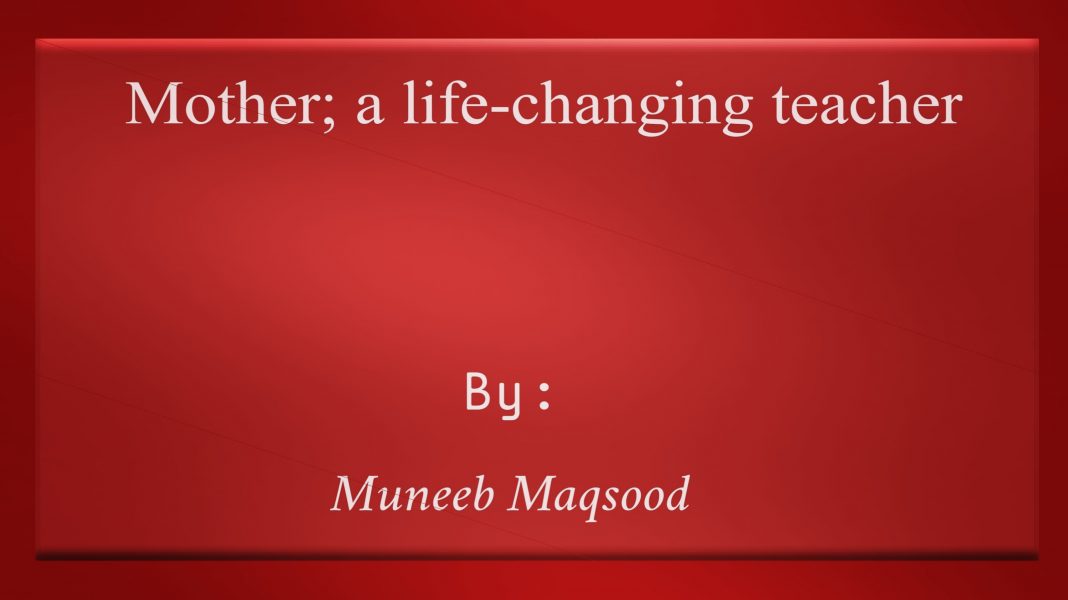 Mothers are distinguished as flowers because they give their children a relaxation as a flower’s smell renders its fragrance. A mother is like a sun that shines her children in the world. However, no other can convert the place of a mother except mothers themselves; every child has to respect their mothers as they respect their class teachers because mothers are not less than a teacher.

A mother teaches her child what to do and what to avoid in the cruel world. Even though they teach them how to speak in the world. Undoubtedly, everyone has learned their first word from their mothers who taught them for more than one year and worked hard on their speaking. A teacher cannot teach a child how to walk but a mother can. She takes her child’s hand to her hands and says, “My dear child, keep going ahead and don’t fear I am not going to leave your hand ever.” Every mother teaches the right path to their children because they do not want that in future their children should do anything morally, legally and ethically unacceptable by the society.

In fact, every successful person has a very potent backbone that is a mother who stands behind her child and supports him/her to defeat any challenge. Every mother is seen praying for their children in any situation; they never leave their children until they are successful in their lives.

However, mothers are considered as the actual key to success. The more you get closer to your mothers, the more success come closer to you.

Without a mother a family is like a body without soul. Because mothers are the only ones who keep all of the tensions of their children and never express them. They decirate a fake smile and happy face but inside they are broken. Since, they do not want that they should be burdens on their children.

In fact, most mothers are found working in different fields. They work to feed and educate their children. They sacrifice their lives for their children. A mother sleeps without having dinner but serves food to her child. When children ask them back, “Mom, won’t you eat?” Every mother’s statement is the same, “No, my child. I have eaten.” A mother wants to see only a happy face of her children, nothing else.

Every child recognizes their mother as their best friends because they are keepers of their all secrets. Children feel free to narrate whatever they want as they trust their mothers never ever break the trust of their children.

But it hurts me to say that there are many established children who are on good positions, but keep avoiding their mothers. Majority of children send their mothers in old-age house where homeless and hopeless parents live. But still mothers are praying for their children for getting more success in their lives. It is true that whenever a child gets in pain, the first word which directly comes out from their mouth is “Mother.”

If today they are in such a position that is all because of their mothers who stood behind them in hardships. A big solute to the mothers who face a lot of troubles_ that too paved by their children. So, it is pioneering that every child has to respect their mothers and fulfill all their needs because in childhood their nwishes were fulfilled by them.

Lastly, mothers are gifted to us by Allah the Almighty to teach us about right path. Without them, we are like a meandering shepherds with no destination. As our holy Prophet Muhammad (Peace Be Upon Him) said that under every mother’s feet paradise exists; for beholding it we have to open the eyes of our heart.