Home Latest News The nine lives of Pakistan; dispatches from a divided nation 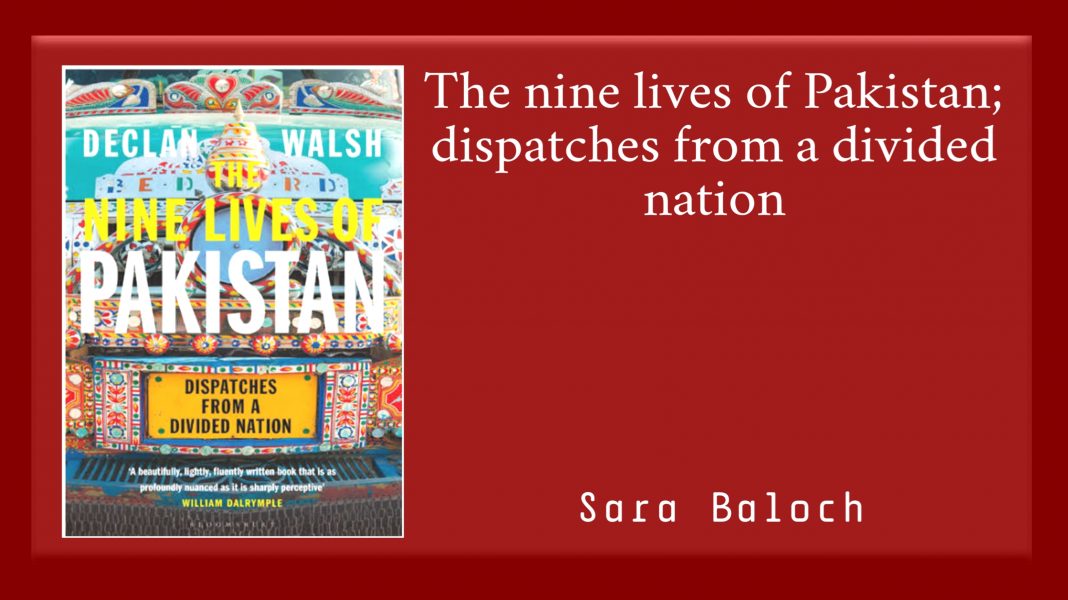 The writer of this book, Declan Walsh is an Irish author and journalist who served as Pakistan bureau chief for “The Guardian” and “The New York Times” from 2003 to 2013. He was forced to leave Pakistan within 72 hours in May 2013, before three days of general elections, after receiving a letter from Pakistan Ministry of Interior. Describing the reason of his expell as because of his undesirable activities.

As described by the title of the book, the author explained his 9 years of experience in a violent and problematic country Pakistan. The subtitle of the book “Dispatches from a divided nation” describes how the country’s areas are different from each other in terms of politics, religion, culture and ethics.

He does not only discuss his 9 years of experience but also describes Pakistan from every aspect. From beginning the maker of Pakistan Muhammad Ali Jinnah whom he calls “The Prodigal Father” to the present day Prime Minister Imran Khan.

He criticized that the country “The Islamic Republic of Pakistan” which is said to be the first country in the world which was made after the name of Islam, has been in the hands of military for decades.

“The land of pure” which was Jinnah’s dream has been sacrificed by violent religious extremism and militarisation. As said in the book “Islam or the army were supposed to be the glue holding the place together. Yet both seemed to be tearing it apart.”

It was Balochistan’s fifth uprising since 1947, the condition were worst and School-children refused to sing Pakistan’s national anthem and burned the books which were on Pakistani history. 14 August was considered as the black day for Baloch. “How did it get so bad?”, this question was asked by author to one of the prominent leaders of Balochistan Nawab Akbar Khan Bugti. Nawab shrugged that “We have always been in a state of war”.

Nawab Akbar Khan Bugti became the chieftain of his tribe at the age of 12 when his father was poisoned to death. In Dera Bugti, the residence of Nawab, the author came to know about the attack on gas refinery at Sui led by Nawab’s grandson Brahumdagh.

When Nawab and his family was the target of military led by Pervez Musharrif, Nawab’s family exiled from country but Nawab refused to leave his father’s land Balochistan saying his feet are already in grave. Nawab Akbar Khan Bugti fought for his nation till his last breath when on 26th of August, 2006, he was attacked by military at age of 79 in a cave of Kohlu.

The author portrays the opening of harsh brand of Islam by general Zai-ul-Haq who overthrew the government and seized power in 1977, hanged the civilian Prime Minister Zulfikar Ali Bhutto and Opened the path to build madressahs everywhere and that caused the the rise of Islamic extremism.

He discussed in his book how the Taliban rose their power in 2006 to 2007 and how establishment supported them to make the country more unsafe. The religious extremists started setting bombs in courts, offices, army checkpoints and kidnapping western journalists.

Declan Walsh also discussed human rights violation and insurgency of one of Pakistan’s provinces, Balochistan; that is hardly known. Unsuccessful attempt to kill activist Asma Jahangir, attack on journalist Hamid Mir and the author himself was expelled from Pakistan because he was reporting on Dirty war
of Balochistan.

At the end, Walsh says that the winner in every struggle and head of the country always was and is ISI and military that stand behind by saying “It seemed to boil down one hard truth: the military always wins”.