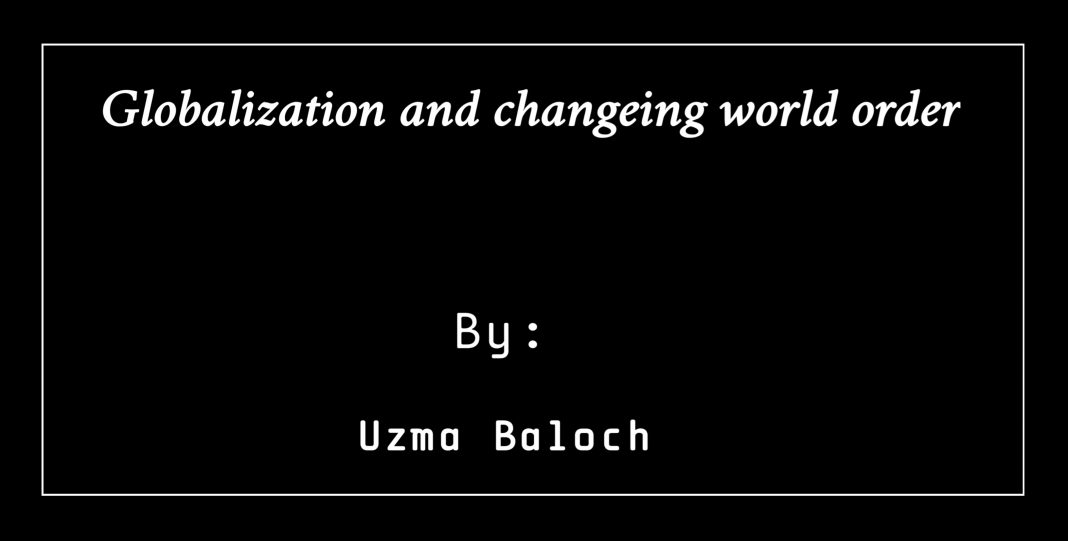 Gone are the days when there were no sources of communication, transportation and possibility of integration amongst the people of different places. Although there was trade and businesses among the people from distance, such as the silk road route as an instance; connected China with Europe in the middle ages, which was tough and exhausting.

In the modern days global connectivity and integration, on the other hand, has emerged as a medium not only to affect the socio-political, and economic structure of the world, but changed the human nature altogether.

Globalization was the consequential reflection of scientific discoveries and inventions. However, the power structure of the globe manipulated the results of human progress towards prosperity and initiated a new global competition leading to sever mutual destruction.

It has to be derived that globalization has consequently flourished as an opportunity for the developed nations to suppress the weaker nations. It unfortunately emerged as an imperial consensus to restrain the progress of consumer countries. It turned to be a system of socio-economic and cultural imperialism controled by the political elites of the world.

The economic factors are more essentially the determinant force in the very world order. It explores that how the ways of production and exchange of goods impact the political structure of the globe.

The current global economic order flourished after the end of the world war ii when the Breton Woods Conference led the foundation of IMF, World Bank and later in 1980’s the establishment of The World Trade Organization.

The ideas of neo liberalism had consequently adopted financial transaction. And it has created a concentration of wealth in the elite class which eats-up the smaller competitors around the globe.

For instance, the Chinese Debt Trap trade policy, affecting the system by expanding its investment in economically unstable countries in order to make them more dependant. This vicious circle impacts the overall dimensions of the weaker countries, making the weaker nations more weaker and the richer more rich.

Besides this, the political dimension looks at the political arrangements beyond the concept of “nation state”. It is said by Dalai Lama, “I found it because of the modern technological evolution and our global economy and as a result of the great increase in population, our world is greatly changed. It has become much smaller. Our perceptions have not evolved at the same pace; we continue to cling to old national demarcations and old feeling of “us and them.”

In the modern concept of nation state emerged after the reformation of protestant, which insures a centralized government.The traditional politics created an “us” and “them” mentality. But the contemporary concept of globalization has vanished this mentality and limited the demarcation of borders.

Further, it is apparent that the rise of organisations such as UNO and European Union threatened the modern concept of nation states more extensively. It is the approved order of the world, however, it faces the critique of some pessimists. It is covertly an institutional deprivation by a certain status co, to define the limits of weaker competitors.

The decisions of United Nations are mostly politically motivated and structurally bound by veto powers. The exemptions for promoting equal opportunities for each country is ridiculed and biased. Here is when skipticism towards the entire system turns to be legitimate and the scope of alternative ideas for a counter world order can easily transform as a policy.

Another curtail motivating factor is cultural imperialism. Cultural homogeneity is the product of global connectivity through communication and open trade services. The diversities of nations is affected by imperial motos, Americanization being the counter narrative. There is always possibility of cessation towards an established order when identity becomes the option. In fact, most of the clashes emerge when people find their identity insecure.

The persistent American ideological expansionism shows more sound reasons for that kind of motives. American intervention in middle east and Afghanistan to maintain peace and order as a mediator derived exactly opposite results. It is no way less drastic than ex-colonial world order. American slogans of liberalization and democratization are efficiently exposed in turning over for promoting his imperial incentives.

Considering all the facts we can conclude that the world of today is not secure as it was meant to be. The current world order is on stake as the balance of power is rapidly changing. The change of policies are becoming unconditional altogether putting the future of the world in an uncertain position. We cannot for sure say that what can be the possible result of the current power competition.