Home Articles Between life and death 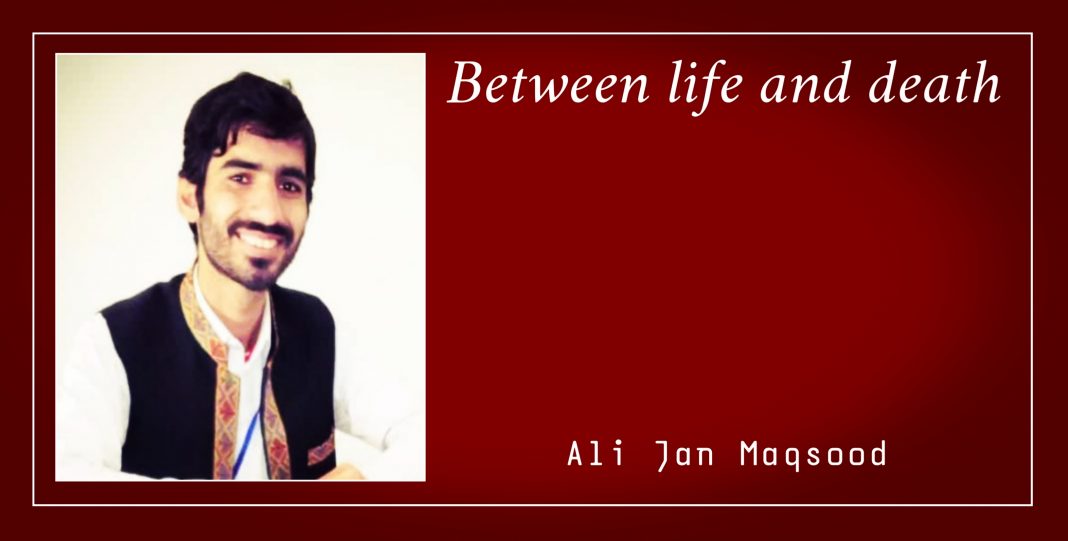 Life tests Shapia Baloch, a 12 year-old thalassemia patient from Buleda, Turbat, with tough challenges in her regular life. She visits Turbat city from the under-construction Turbat-Buleda road amidst poor financial background. She hangs in-between life and death with her by-birth disease as she needs blood transfusion after every 25 days. Due to poverty she cannot have a proper treatment outside the city, whereas facilities do not exist in her town. Consequently, she cannot afford to get an education; her poor health condition enhances more of her worrisome towards an education. She weeps with the moon every night pondering if she gets a good health in future or not.

Sadly, she travels to Turbat from her town with her mother for blood transfusion costing her around Rs. 3000 per trip; the other expenditures as lack of stay room in the city and food amp up to her financial worries. Because her father is a labour who, not always get to have a job, can afford only little to her monthly travels. “We [before getting admitted to Kech Thalassemia Blood Bank] stayed in civil hospital for days to get a donor on time, which needed lot more money; we could only have a little.” says her mother with tearful eyes hugging Shapia.

This also breeds Shapia to get out of school. Although she wishes to get an education in order to be a doctor, her family could only afford [a little] to bring her in Turbat city for blood transfusion. The money could stay no longer with them for her education. “When I see kids of my age going to school in uniforms, tears come out of my eyes because I, too, want to accompany them, play like them, enjoy my childhood and be a doctor in future, but….” emotions take over Shapia when she wants to finish up her words.

As per a report of UNICEF Pakistan, Balochistan holds around 78% of its girls as out of schools. Alif Ailaan further clarifies that only 40,000 girls of Balochistan go to schools till matriculation. The reasons are far reaching High schools and less number of colleges in the province_ particularly in Southern districts. On the other hand, if there exists any school or college, they are rarely functional.

However, Shapia, in last few years, has only had blood transfusion, no other treatment and medicines. It ultimately affected her physical growth; she appears to be only of 6 years, but is 12. When she is treated with medicines and other necessary injections, it would reduce iron in her body. The presence of more iron in the body of a thalassemia patient lessens the amount of Red Blood Cells [RBC] and renders her stomachache, headache, extreme pains in feet and her belly would get bigger in size. “A presence of Thalassemia Centre would help Shapia get the blood washed before transfusion which would take out the iron in it.” says Irsahd Arif, the founder of Kech Thalassemia Blood Bank, Turbat.

As Turbat owns around 296 patients of thalassemia, building up a Thalassemia Centre in the region is the urgent need of hour. Although it is not only Turbat, but whole of Makran Division who approach Kech Thalassemia Blood Bank in Turbat and routinely visit the Bank from their city to get the required bloods on time. Albeit the Division is the hub of China Pakistan Economic Corridor [CPEC], it lacks the fundamentals of a good living.

In the recent meeting of the provincial governmental authorities, a Thalassemia Centre was approved to be built in Turbat, but no work has protruded yet. “I want to be a doctor and build a Thalassemia Centre,” says Shapia so innocently when listening closely to the discussion of Kech Thalassemia Blood Bank on a Thalassemia Centre. But who will lift her towards fulfilling what she wants as a citizen of the state?

According to a report, survival rate of thalassemia patients in the country has increased to 23% from 13% in last few years. The major reasons of recovery of these patients are; 50% chances on to getting blood on time and 50% for proper medicines and injections. But, how would a poor patient afford to get injections and medicines of 20,000 to 30,000 thousands per month? A Thalassemia Centre would give financial reliefs to the children along with adequate treatment.

However, Kech Thalassemia Blood Bank in Turbat has been functional since February, 2020, which is playing a key role in providing blood on time in order to ensure 50% of life to the innocent children, but what of the remaining 50% which can meet the end with the presence of a Thalassemia Centre? The little patients have dreams; dream to live, play, read, make a name, enjoy the life, and many more. Government ought to ensure them the best to save their lives by any legal mean. Besides government, the common people need to help out by only donating blood to Kech Thalassemia Blood Bank in Turbat so that the pretty children get to have blood on time. Do the best you can to save lives of the children.