Home Articles Keep a little hope in you 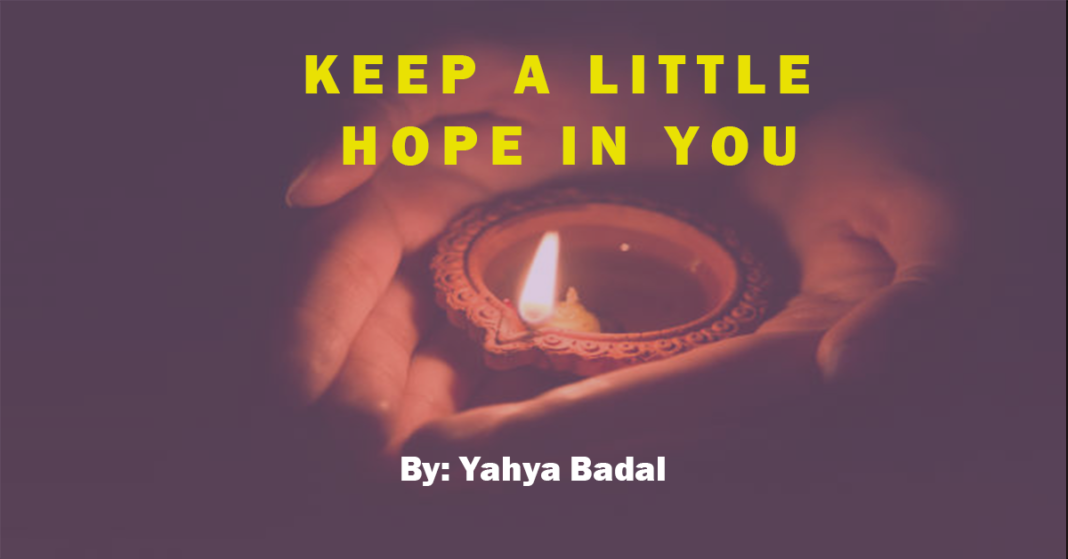 Life is not easy, but it is indeed beautiful with what it brings for us. Every challenge that we go through in our way to acquire our aim can be seen as an exam of our abilities. Munaj Gul, a handsome young teacher with brown charming eyes, wearing his favourite clothes (black) standing in front of the mirror, checking himself how handsome he is, at the same time playing with the black straight hair of his whistling musical note and admiring his own image in the mirror feeling as if he were the only one in the world.

”Munaj Jan, come, breakfast is ready. Come on otherwise, you will be late.” His younger bro, Ali Jan, shouted arranging the table murmuring.

”Hi Ali Jan, why are you murmuring?” asked Munaj with greeting and started cobbling the food together in a hurry.

Ali Jan responded angrily, ”Look at the sky, it is going to rain and you are leaving.”

”That is none of my business, Ali Jan. I have to leave because it is my duty and don’t worry, might there won’t be any classes today.” Munaj interrupted him and rushed to the bike saying him goodbye. He left and Ali Jan looked at him till he disappeared.

”Good evening, Sir,” said Munaj to his boss, Captain Naveed_ the head of a nearby English institute. He is also the one who had the bond of love and respect for everyone around him.

”Sorry, Sir. But sir should we have the classes today as the weather is stormy?” Munaj asked his boss with a grin.

”If you are afraid, you must not accompany. You should resign and sit at home. We need no coward, alright.” The boss replied with great anger.

Munaj, raising his eyebrows, left towards his own office. When he stepped outside, the blowing breeze touched his rambling body that panged the pierce to his heart, he spread out his arms taking the breath up with ecstasy, feeling the weather and its strange smell was really so intoxicating.

”Excuse me Sir!” the voice broke his nice contemplation. He looked up and saw the assistant of him. ”Sir it is time now,” he said.

“Yes, honourable sir!” Munaj responded with taking the breath up once again. When they entered in the boundary, Mr Munaj went to see the students. He returned after a while. Taking the charge, he called the rest of his jury members for being ready in order to be present in their classes. He was granted by his boss, not to be off for today.

After a while, all drivers of our respectful students stood near the main office, where Munaj’s boss sat in general. All the drivers could see when it rained heavily at the time with its extreme speed.

However, the sitting students could see the black clouds surrounding them through the windows. It was quite much comfortable for them, but not for their drivers since they wanted to have fun or picnics on such great days ever.

As it thundered a lot at the time and drizzled a bit, few of the kids from Sadiq’s class started crying. Besides his class, Fazal’s students were mature too but yet they rushed to the head of the institution, “Sir… sir… sir, now we are going to die.” Kneeling themselves down, they went insane losing the courage and gave up.

On the other hand, all of them were thinking of the ones who cared for them a lot. Every student, teacher and driver was recalling the majestic moments of their lives and the soft smiles of the cute angels.

However, young Munaj Gul with the great audaciousness and without fear of death was still performing his job.The pressure gear was in his hands and he was doing his best to control all of the people around him. He was completely sweating and his eyes were full of tears since he had the responsibility of these all though his boss shouted on him too. He was trying in such a moment where some times hope itself becomes afraid and leaves associating.

After the long agoraphobia, everything became normal. He left for his home where he could see Ali Jan smiling. He touched his face, pulling out his hairs and cried out with a great joy of his victory between hope and life, tears rolled on his cheeks. Ali Jan called one of his neighbours namely Lal Bakhsh to tell him “Why was Munaj so?” When Lal came and he did the same as Munaj then Ali Jan smiled at both of them and hugged them.

Thus, every one of us has to think what would have been the result if Munaj had knelt down and given up as some people do these days? Remember, the struggle and faith of a man never go in vain, it works until the last breath of a man. Just need the self-faith of ours that how much you believe in yourself.

In short, the fear of death always kills the person before death. So, be sure we all are always sailing in the airplane of our lives and every one of us is the pilot of our own planes. We can find any time our plane crashing and then there we need not to go insane. Death has to come as it is inevitable, just keep doing your best as what you are for.