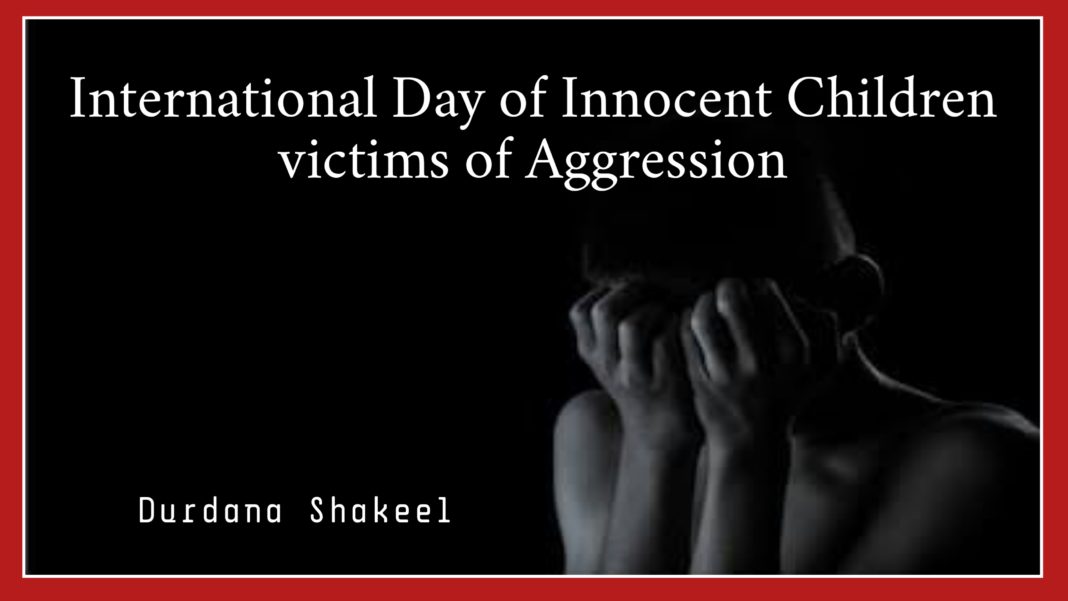 The international Day of Innocent Children Victims of Aggression is celebrated every year on June 4 for the purpose of highlighting the pain suffered by children through mental, physical and emotional abuse across the world. The day also accolade to the victims of 1982 Lebanon war where the Lebanese and Palestinian innocent souls suffered by Israel.

It enhances awareness towards well-being of children. Each year the day is celebrated to bring awareness regarding children’s rights but yet the society is unaware of the rights of children.

Instead of the ratio of child agression to decrease, sadly, it is increasing day by day. If we have a glance towards the reports, more than two million children have been killed in the conflicts over past two decades. More than 10,000 children die each year because of violence. Thousands of children are involved in the child labour who are unable to get education. Even though, constitution has given them the right to free education but still millions of children are far from schooling. Child abuse is on peak and hundreds of children are abducted and sold.

Sometimes, I do wonder, is the organizational working for the protection of children’s rights?

However, it is worthy to mention that children are not safe even in their own house as the recent incident of Turbat (Dannok) made an innocent child orphaned where the robbers shot her mother and injured the innocent Bramsh. It is very hard for 4 year-old Bramsh to lose her mother so early when she needs her the most. For how long will the children suffer in Balochistan? When will such kind of incidents end? When will our government end supporting the felonious?

Besides this, child abuse is the center of attention around the world. The United Nations Organization is working hard to protect the children, but we cannot see a positive result in Pakistan.

Because every once in a while a shoking news of the murder of a child shocks the nation. There are various cases in front of us like eight year-old Madhia went missing on 16 February, 2020, raped and murdered in Hangue, a village of kyber Pakhtunkhwa.

Farishta, ten-year old from Islamabad, went missing then raped and murdered after that thrown in the forest. Similarly, six-year old Huznoor went missing two months ago from madressah and never came back. She also suffered the same.

Moreover, the 8 year-old Asifa was gang raped on January 17, 2020 from Kashmir. And her body was found in forest. Another victim was 7 year-old Zainab who went missing and next day found raped and murdered. The little baby Jannat, just four-year old, went missing and gang raped and put her body in a well of 80 feet deep. Words bleed when such incidents occur.

It is a bitter truth that being born in Pakistan is not less than a punishment where people die each day hearing such shoking news.

However, according to a report released by Sahil (NGO working on protection of children’s right), more than 4,139 such cases occur in Pakistan each year_ especially in kyber pakhtunkhwa. These are very shameful acts by some animals in shape of human beings.

Hundreds of innocent souls of small ages fall to these cold blooded animals.
Such cases are not usually reported due to fear of society since parents have to face the ruthless words.

Nonetheless, the cases which have been registered but left on the mercy of police who treated the cases traditionally, are yet not solved.

Why are laws made? For whom are these laws made? Why are criminals living fearlessly and common civilians in fear of the culprits? When will this end? For how long will the innocent souls suffer? Helplessly, we are tired of asking for justice.

The people just take action for few days then forget as if nothing had happened. The same tradition continues without fear. If our government continues to oppose the bill of public hanging of child abuser, then they, for sure, continue the lust drives.

The government should take serious steps towards the protection of children because they are the future of Pakistan. Hopefully, we will come to an end of all this drama. Children need protection.