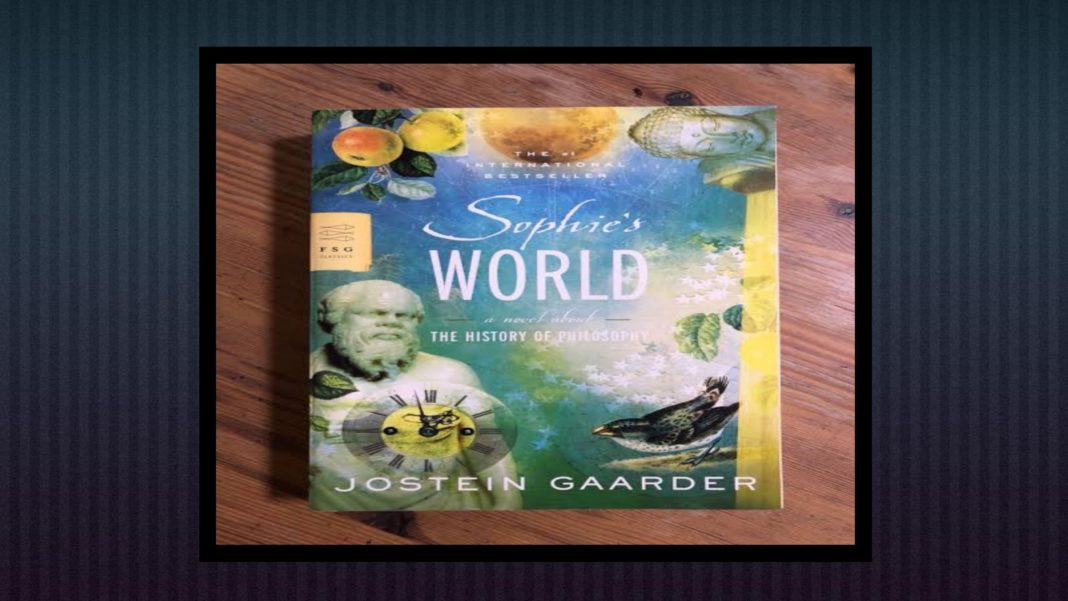 Review of the Book ‘Sophie’s World’
Sophie’s World by Jostein Gaarder is an English Novel. It has been translated into 60 languages and has sold over 40 million copies. The fiction story of the girl ‘Sophie Amundsen’ with a philosophical effect is much catchy and hooking. A book of history may drag you to the boredom but this piece of work will rise an engagement and curiosity in you.

A bird’s eye view to the book.

Book starts with Sophie and Joanna her friend on the way home from school. Arriving at home Sophie finds a letter in the mail box of her gate. The letter reads: Who are you? Letter doesn’t possess name and address of the sender. This puts Sophie in deep thoughts. Sophie her mother are the only members at home. Her father works in Navy so, mostly out. Sophie keeps getting letters from the unknown sender who intends to teach philosophy to Sophie.

Soon Sophie gets the second letter which reads: Where does the world come from? With getting the third letter Sophie gets startled. Third letter was directed to Hilde Mollar Knag. And addressed 3 clover close. 3 clover close is Sophie’s address. Sophie gets shocked to see her address on the letter with somebody else’s name? The letter reads: Dear Hilde, Happy 15th birthday! Love from Dad. Bunch of question arise in Sophie’s mind that who is Hilde? How was the letter addressed to her if it was for Hilde? How could her birthday and Hilde’s birthday be same? With these puzzled questions she soon receives the next letter which is intended to teach a philosophy course to Sophie.

Consecutively, one by the other Sophie gets letters of philosophy which teach her about the Myths of the world, the ancient philosophers, Democritus’ concept of atom and lots more. Afterwards she gets the letters about Fate with the questions: Do you believe in Fate? Is sickness the punishment of the gods? What forces govern the course of history? In the midst of these letter Alberto Knox reveals himself to Sophie that he sends the letters. As the days go on Sophie gets more curious for these letters. Now she gets the knowledge of Greek philosophers starting with Socrates (wisest is she who knows she does not know.) Next comes the Plato (a longing to return to the realm of the soul.)

Then some other philosopher including Aristotle, philosopher from Middle Ages and Renaissance also fall in the upcoming letters which study some legendary figures of the history like: Baroque, Descartes who brought up the thought of ‘Cogito ergo sum’ which means I think therefore I am.

Spinoza, Locke, Hume, Berkeley, Bjerkely, The period of enlightenment and Kant. Onwards comes the period of Romanticism that includes: Hegel who represented “the path of mystery leads inwards”, Kierkegaard, Karl Marx and his Marxism theory, Darwin’s theory of evolution, big bang theory, and Freud. Some pages from the last of the book are about our own time which emphasis over people’s attachments with worthless activities rather than true course of life.

The book is full of historical info. It holds a great theme of philosophy and is worthy of commendation. Though it is a fiction story but the pages are full of admirable prose.
Some worth reading lines from the book”
If we were never ill, we would not know what it was to be well. Heraclitus (540-480 B.C).

If you don’t believe in God you don’t believe in yourself. Epicurus (341-270 B.C)
‘Carpe diem’ (Live the present without thinking of future.) ‘Memento morri’ (Remember you have to die.) Famous Latin phrase
To be or not to be, that is the question. Shakespeare (15th century)
All world is a stage
And all men and women merely players
They have their exits and their entrances
And one man in his time plays many parts. Shakespeare (15th century).

What is life? A madness. What is life? An illusion, a shadow, a story and the greatest good is little enough, for all life is a dream. Spanish dramatist Calderon de la barca (16th century).

L’homme machine (Man is a machine) La Mattrie a French physician and a philosopher of eighteenth century. (18th century).