Home Articles Why did you leave the horse alone? 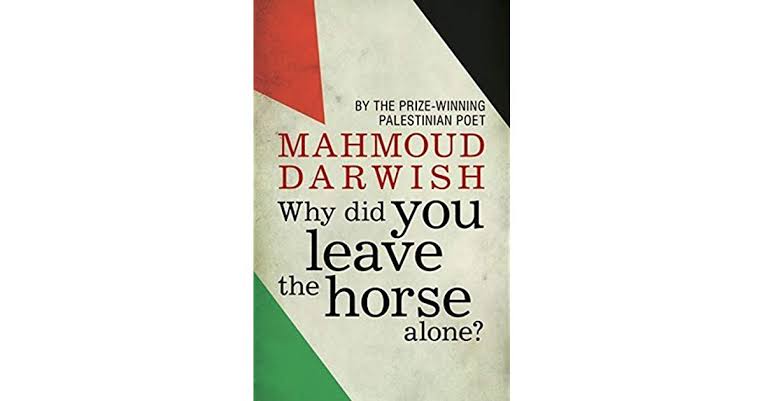 Book review of Mahmoud Darwish’s “Why did you leave the horse alone ?”

– Where are you taking me, father?
– Where the wind takes us, my son . . .
– And who will live in our house when we are away, Father?
– It will remain just as it was, My son!
– Why did you leave the horse alone?
–To be company for the house, my son,
For houses die when their inhabitants leave them. . .

(The Eternity of the Prickly Pear)

Mahmoud Darwish was born in Al-Birwa in western Galilee in 1941. After the establishment of the state of Israel, in 1948, Darwish’s family moved to Lebanon. Darwish believed that it was a second time they were being driven out of Paradise. Once, they were taken out of Heaven and than from their motherland Palestine.

Published in 1995, “Why did you leave the horse alone?” is an intimate autobiography and a depiction of the thoughts and imaginations of an exiled man. A man; whose language is losing it’s words, whose identity is in danger and whose land is occupied by the imperial powers. The poet died with the dream of a free motherland and an independent life.

Title of the book, “Why did you leave the horse alone?”, is actually a question asked from a child to his father, in a poem, ” The Eternity of the Prickly Pear”. This poem is a conversation between a father and a child (the poet himself), who are being displaced and compelled to leave their house due to a forceful occupation. Consequently, they leave a horse alone in order to look after their house inhabited by ‘absence and time’. Later on, child witnesses the troops of Joshua Ben Nun building a fortress from the stones of their house. These stones, taken from their house were now being used to keep them away from their own house. Darwish believed that they were actually witnessing the inauguration of the ruins.

In postcolonial perspective, this book is “an act of writing back”. Darwish traces the national identity and culture of Palestinian people, which have been manipulated by the occupiers. By saying, “no one guided me to myself. I am the guide to myself between sea and desert” in “Rhyme for the Mu’allaqat”, the poet tells that he himself has taken the burden of finding his real identity and no one is there to guide him.

Darwish is so much sincere with his thoughts and ideology that even his dreams are incomplete accordance with his ideas and principles. As he tells us in “Villagers, without evil” that “We do not claim sovereignty of dust, And our dreams do not overlook the grapes of others, or break the rule !”

Mahmoud Darwish sees poetry and politics as inseparable. With the help of his poetry he claims an independent land and an identity for his people. The poet wishes to tell us that identity can not be forced by the state even on its own citizens who are supposed to be undertaking the mission, believed to be divine by the state. Even after death, his poetry survives, and challenges time and space.