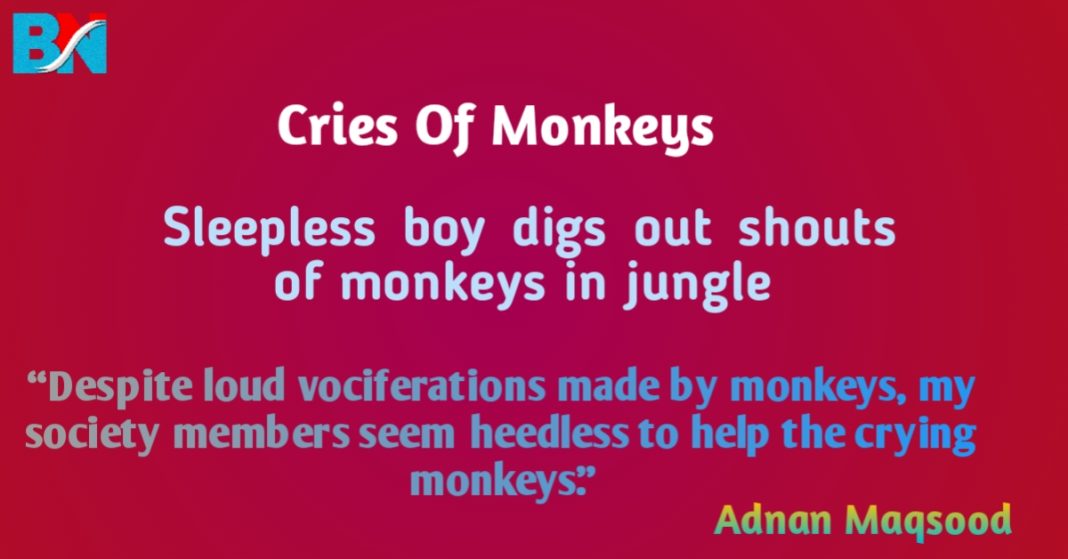 “There is no sleep in its eyes, nor any tiredness in his voice,” spoke my brother to me.

I was laid, knelt in hurry to look outside and visually input my brother’s wordy talks. I found nothing special outside. “What are you talking about Lala?” I raised a question.

“Can’t you hear this horrible and long-term shout? There is a monkey in the jungle who is so unpleasantly voicing and it never leaves the spot as well as shouting,” he answered me.

He was right. Several times the sound touched my ears. But I was not sure of its existential being.

“Lala, why don’t you and other elders go and inquire about it? The monkey might be in troubles!” I asked with a low and innocent voice.

He gazed me with doubtful expressions and said, “We don’t have free time for it. The monkey must know solution to the problems if it is suffering from it.”

Not always its sound was heard. We could hear it when everything around us was fully silenced. Like dead. These two nights, the sound was more louder. From the gossips of society members, I could know there was not only a monkey now, they were monkeys shouting all with same words at the same time in their own language.

I was not alone looking for their sounds, but some neighbors, too, were worried and thinking that they (monkeys) must have been in problems. Because such shouts, in their tradition, were when something bad happened.

It was dark around. I found myself too much attentive towards those vociferations, or could be named cries of monkeys. Every member of my home was asleep. Making it a right time, I took the torch and left for the jungle. Each step towards them made those cries saddening and hard enough to bear them. I did not move too near because of my inner fear, but stayed in a distance as the darkness made everything invisible.

Particularly, one of those monkeys seemed to be older than the rest lined-up and participated in expression of cries. They were total 15 to 20 monkeys crying loudly, making their faces in the darkest side of the forest. Something amazed me: from the direction, a dirty – completely bloody with big teeth and red eyes animal – came out. All it did was, it took a separate monkey, standing aside from this group of crying ones. The baby monkey was not grown up well and shouted as hard as the earth departs into two pieces, yet the four-legs-walking-animal did not leave it. At the end, it was taken in the darkest part of the spot.

Apart from the crying group, the location was filled up with separate groups of monkeys, most of them groups held 2 monkeys. One of them unconscious in grief of its child and the second trying to relief it. It was like a father consoling a mother on killing of his child. On some points, the other monkeys in trio were fearfully looking at each other. The animal, time and again, came and snatched a monkey from trios! And the cries went louder and louder.

The group of 15 to 20 monkeys with same sound increased and it was now a total of 100 monkeys. Each departed family joined them after being wholly known of the loss of their child.

I was far more smaller than the size of the animal. When it came out, my feet shivered till it went invisible.

“Those monkeys were more powerful than the animals, as their population was greater in number. They could fight against the only dangerous one in their jungle. What if they all stand together, can’t they defeat it? Off course yes! If yes, then what is stopping them for implementation of this step? The grief of their children, the scary look of the animal, its cruelty, or all that was the dead-beings inside the living monkeys before they attempt to take an initiative?” I wondered in my mind while leaving the place with fear and grief as them. 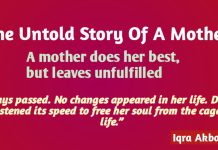 The Untold Story Of A Mother