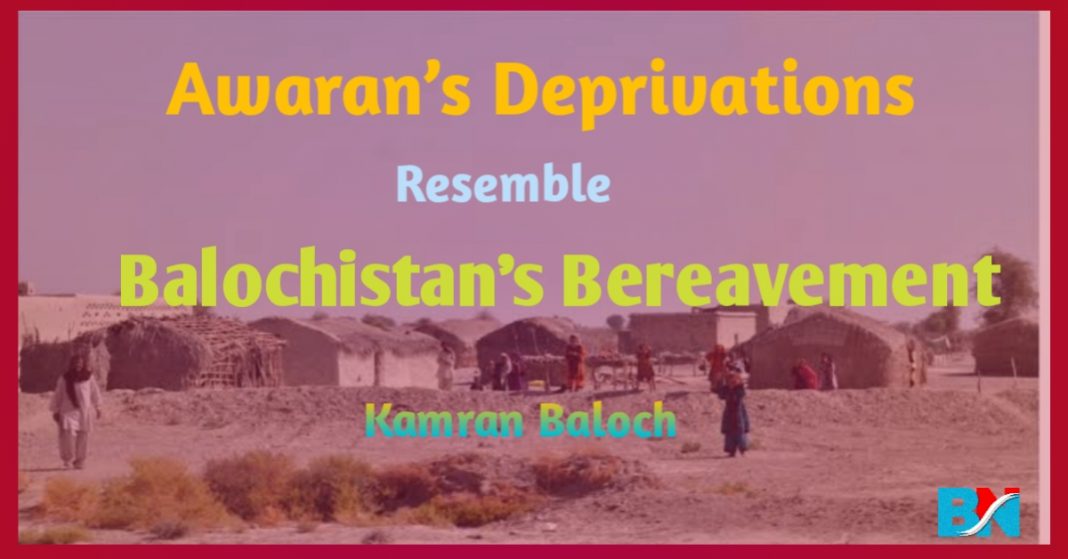 AWARAN is one of the least developed districts of Balochistan posing a least-attention-sought region for decades. Not a single sector has gained an eye resulting in the residents to face umpteenth problems on daily basis. A concept of fundamental rights seems vague in Awaran. In fact, some towns of Awaran are even deprived of electricity and mobile network facilities which further clarifies how the district is going through a worst phase.

From early days, we hear education is an important segment for self and national development. It is also deemed as a weapon through which we can change the world.

But unfortunately, in the said district, education system is completely made a waste. Instead of being in schools, many students work on fields, garages and sit idly because of ghost teachers and schools. Consequently, students quit after few years noting that going and not going to school stood equally.

Other than education, Awaran’s residents are deprived of electricity too. Considering the twenty first century, it is, after education, the worst issue of the region. The people are still living a poor life with inadequate provisions of basic rights. The ones who can afford choose installation of solar system, but a large portion of Awaran belongs to below-poverty-line families.

Several politicians, including the present chief minister of Balochistan Mir Abdul Quddus Bizenjo, have promised of supplying electricity to the entire district, but we see nothing in practical. How hapless the locals are that despite knowing the fact that nothing is going to be the response of the politicians, they keep blindly hoping for a better result.

To bring into your attention, natural gas was discovered from Balochistan’s Sui (Dera Bugti) in 1951/52, but the entire Balochistan is deprived of it. While gas pipelines, spread in front of the houses of people of Sui, are taken to Sindh, Punjab, Khayber Pakhtunkwaa and Islamabad, but the regions in Balochistan – other than four districts – are yet thirsty to avail the facility.

Awaran is one among such districts that breaks the bridge for gas facility. People here turn to nearby jungles to collect wood for their use. This has also promoted the chopping down of trees because it has remained the only option for the residents. Had Awaran received gas, they had never cut down trees to bridge this important gap.

The regional roads portray a similar fate which are bumpy. Unluckily, these roads have been causing several accidents. In emergency cases, it takes more hours to reach another city as the hospitals are no different than this.

The described assertions clarify how Awaran has failed to seek governmental approach amidst the chief minister belonging to the same district. The people still look for a swing in their fate in times to come.