Home Latest News How Trauma Literacy can transform our lives 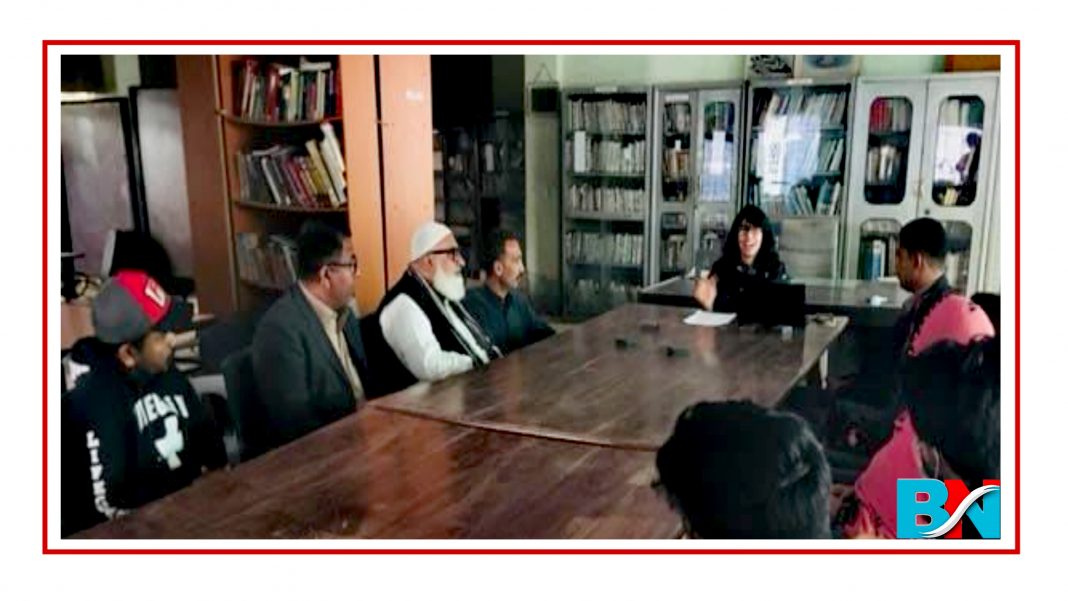 Lyari Literary Forum held a study circle program entitled “How Trauma Literacy can transform our lives.” The lecture was delivered by Samreen Huda who works as an educator, teaching Muslim culture, faith and history to secondary students of Ismaili community residing in the UK and Europe.

The lecturer in the beginning of her lecture narrated that Trauma can necessarily be not one event but a series of events for many people. Trauma can be continuous and it leaves its effects upon different people in different ways. Such as, in domestic conditions one is often humiliated and blamed for causing some issues. Or the way of parenting and even love, they are victims of humiliation. When the parents fight and the children witness that atmosphere of fight it can bring trauma upon their personality. Even though in social conditions when children witness violence or abuse, it can also cause trauma. Most importantly, it is not necessary that It should be one event that cause trauma but series of events or continuous situations can cause it too.

Secondly, trauma that happened with you, is not the trauma rather trauma is what you couldn’t process or unable to understand. If a child go through an event and after that he remains silant and in loneliness all the time. He starts living with that hurtful wound which doesn’t let him to be healed and that pain stays with him. That is the trauma which has no roots for healing neither processing. You have no one around who can understand all those feelings and emotions which has made you feel to be alone. You are in continuous turmoil and that is why because it has happened only to you. These are the traumatic experiences that are stored in the child’s memory. The child gets the constant message that he is alone and unsafe.

She addressed that Suppose, if we are sitting in a room, in a chilled and safe environment. Our heart rate is at a normal pace, we all are sure and satisfied that no disaster is striking us so we are safe. As our body has a nervous system, which constantly gives messages to our body. Like, if we touch a hot pot, we instantly pull back our hand; so that’s our nervous system, that if we touch such hot stuff, the neurons send messages to the brain that it’s hot and then we immediately pull back the hand and this works so faster than the electricity.

Imagine, if a snake enters in the very same room where we were sitting chilled environment, then all of a sudden, fear will spread in the room, heart rate will increase, from a normal situation to the arrival of danger, our nervous system comes in an alarm situation. In that duration our body gets two reactions, one is to fight or escape mode, where you feel that you are no safer.

Our nervous system alarms us that now we are not safe. Either we have to run or fight back. And our body also reacts to it in both fight mode and in flight mode, our heartbeat increases, blood pressure becomes high, sweating and suffocation occur.

Another mode we get is freezing. In this mode, a person possesses no such capability of running and fighting but just simply freezes.

It’s also a body reaction. That now nothing can be done. Safety is over. Or the shock is so high that the person gets fully frozen. In this mode, Blood pressure lowers, pulses down, heart rate lowers. Temperature lows everything simply freezes, and there’s no way out or solution for the danger that has come.

The nervous system, when trauma strikes every person reaction is different. Every child reacts differently. Some become aggressive, turn into fight mode, and fight. Whereas some can’t fight, they try to avoid and run faraway from the situation, meanwhile, some become freezed.

And likely our nervous system works, if any of the above modes we were in our childhood, the same mode is set in our adulthood as well. Such as if in childhood, a father scolds the child or father is abusive, and the child’s reaction towards it is freezing then the child in his adulthood will freeze towards such a situation. All the traumas in childhood will affect adulthood and way to another.

Further, the lecturer discussed the importance of emotional safety for children in a family. A family where children have a loving connection with parents, emotional safety becomes very essential for them. It is very necessary for parents to have Emotional Safety literacy in order to have healthy children psychologically and physiologically.

If you have a safe place where you can be on the verge of vulnerability, but you feel safe and secure. The family help you and forgive you, and hold your hands in vulnerable situations. A place where damaged relations are repaired; love is above the expectations; and love is accepted in all conditions unconditionally. If a child feels safe, and they are assured that whatever they do, but they won’t be abandoned. Such feelings give that child good feelings of emotional safety.

Emotional safety for children is very important. If children don’t feel emotionally safe, then they will face some physiological challenges in their adulthood.

The traumas which children have experienced will bring physiological changes. The child who was left out crying alone in a condition when their brains were almost under development, emotions were regulating and they rely on parents. Such psychological bad experiences can have bad psychological effects on the children.

Children understand and learn things unconsciously from their parents and society. If children witness violence or aggression around them, the same way they will react outside. Because the nervous system becomes set on that circuit and the child acts accordingly.

And to break that circuit, we need literacy, education, and awareness.

We should understand and study our traumas. If we don’t study them, they won’t help us. And then traumas will effect dangerously.

To understand it, we should know the brain first. The brain has some important parts. Such as the amygdala, which is near to hippocampus. It’s the region of the brain primarily associated with emotional processes. When we get some alarming situation, and turn into panic mode, and feel unsafe, then the hippocampus sends signals to the amygdala, and amygdala panics. Like we get to know that snake has come, and we react instantly. That reaction is signaled to our brain by the amygdala. And then it produces cortisol (stress hormone). It increases heart rate, pulses, and the blood pressure too.

Another part of the brain is the prefrontal cortex, when a situation becomes normal, it signals the brain that danger is over, it’s a break system that normals the blood pressure and heart rate. And brings us to stability.

If the child has gone through hardcore experiences in its childhood where it felt unsafe, not physically but emotionally, such as, if he faced criticism for his appearance; and if he was a victim of body shaming, or was abused that caused him hurt, and if the child couldn’t burst out that frustration and stress. Then such a child is considered as a victim of emotional insecurity.

If the uniform of children is in disorder; dirty or torn. Such a child will always be conscious that the teacher or the students will make fun out of him. Eventually, the child becomes alert.

If the child has seen violence or aggression, then its alarm system becomes activated that anything can happen. Because child’s brain has been producing cortisol.

And if the cortisol is being produced for a long time, then it will cause physiological changes in children’s life. It means such a person’s hippocampus becomes 6 percent short. (Hippocampus that plays a major role in learning and memory). These are the bad psychological and physiological results of emotional insecurity in children.

Lecturer briefed us that Brain scans show that children who were socially healthy and stable, shared a great bond with parents and family. They are emotionally nourished and lived a free unrestricted environment, who explored and experienced, whose imperfects were accepted and they felt safe their brain scan will differ from the traumatic children who suffered. Another part of the brain is microglia that clarifies dead cells in a normal brain.

But if in a brain where cortisol is being produced continuously, traumatic experiences are taking place rapidly, then microglia starts eating healthy neurons. Brain scans show it too.

Further it changes the gene. Like our body is made up of cells. And every cell consists of genetic makeup and children posessising same features like parents, such as height, eyes color that one gets from genes.

Moreover Samreen gave an example that, if a person suffered trauma in childhood, as an adult he may treat his children that same way he was being treated. And from generation to generation, that gets transmitted and genetically changes occur. So as my brain has stress hormones and microglia released, the genetic material will also change. And ultimately, we will be vulnerable to many diseases such as heart attacks, prostate cancer in men and breast cancer in women, stomach ulcers and other diseases due to the interconnectedness of the body and brain.

Gabor Mate has been discussing in his book “The Body Says No” that the body, environment and brain are all three interrelated. He has discerned the reasons for the disease and has incorporated these points into his reasoning.

Because the environment, brain, and body are interconnected. And that will vary from generation to generation. Additionally, researchers reveal of prostate cancer is most prominent in black Americans, with white Americans in similar backgrounds not being susceptible to it.

Trauma encounters take an Emotional toll, a way a situation affects a person is to become hyper-vigilant, at times the experience may not be all that traumatic, but based on their active Alert System, they become conscious and have a stronger reaction.

She concluded her presentation by stating that understanding and learning of the nervous system is essential. In conflict-ridden areas, there needs to be community initiative for literacy. Trauma awareness may transform our lives. An understanding from trauma may change our lives. If we acknowledge our childhood, and understand and then dissect what factors we witnessed in our childhood, what views we have of ourselves, and then come to terms with it, our Lives will definitely change.