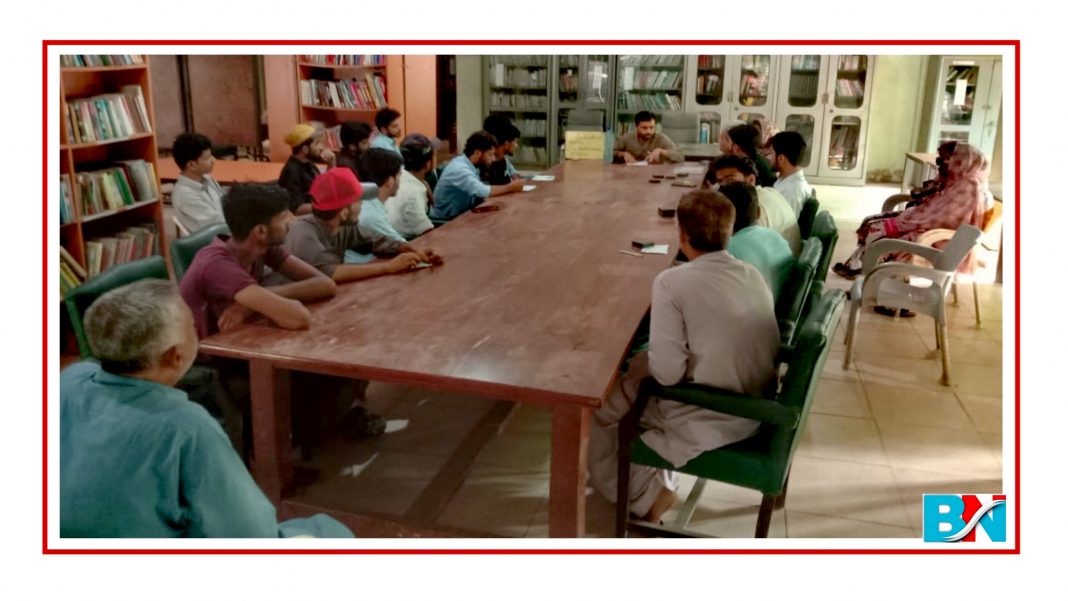 Liyari Literary Forum LLF held a study circle program entitled “Talibanization” on 11 September 2021 at Mullah Fazul Library . The lecture was delivered by Faheem Baloch. The speaker is doing MPhil in Computer science at the University of Karachi.

He is a student of computer science department and belongs to the field of technology, but he has never forgotten ground realities of his history, culture, politics, and Balochistan’s code of ethics. Besides, be believes that Baloch Students must use their critique and not be robots or be a part of Slave-Education but a colonial free Education. He further says that One shouldn’t be a ‘Yes Man’ one should understand and know where to say yes and where to say No. As his Guider, Ustad Saba Dashtyari has always told, “Rasti ey Hamra bu” follow the truth no matter where it leads you.

Faheem Baloch presented the topic Talibanization. He said, the term Talibanization means the idealogy Taliban have opted and implemented. Whenever we hear about the Taliban or Talibs we get a very stiff and negative image. Moreover, Talibanization impacts are not only based in Afghanistan but in those regions where religious extremism has taken birth. As sometimes we hear that India’s PM Narendra Modi is acting towards Talibanization because the Taliban have always used force.

Also, in that duration, Afghanistan Shah had visited Europe, and at that time women were Educated. So Britain played a conspiracy to counter Shah Aman Ullah so that he may not revolt against Durand Line. They captured Shah’s wife’s pictures ‘Shaking hands with France King’ showing it to Afghan people and telling them their Honour, reputation, and code of values are being devalued, their religion is at stake. A religious factor that was already present in Afghan people, was further intensified due to British conspiracy. Another Shah came, he again promoted Education, but later on, was killed but the seed of Education they buried didn’t die, therefore Afghanistan sometimes was radicalized against Britain conspiracy and sometimes not. Because change is unstoppable. When in Last Zahir Shah takes over Afghanistan, he too was against of Durand Line, but as such he didn’t possess a strong and powerful hold, he didn’t resist and revolt to make it a greater Pashtunistan and bring back the areas that were divided in Durand line.

Meanwhile, in 1971 when Pakistan was in crisis, Dawood wanted to grab the chance and revolt against Pakistan and secure those lost areas of Afghanistan and support Balochistan as well. But Zahir Shah rejects, then Dawood sends Zahir Shah to Italy and in that duration, some religious leaders arise. As Dawood had a soft corner for USSR, Molvis then visit Pakistan. And Pakistan supported them in a religious factor. That Dawood was anti-religious and anti-God. And further in 1975 they attacked but their resistance faced failure. And Dawood after religious upright believed that he was being used by communists and when a communist leader was killed, Dawood was blamed for the murder. He was arrested.

However, the external religious influence also arose when Gul Badeen Hikmatyar and Buran Uddin visited Pakistan in the government of PPP where they fully supported them. Then in Afghanistan, both internal and external religious factors existed.

When Trakai arrested Dawood, he resisted but they shot him. And Hafeez Ullah Amin and Noor Mohammad Tarkai hold the power as President and Vice-President of Afghanistan. Hafeez Ullah states that he will set a Two Nation-State in that two Nation-State, Balochistan is also included. And whole people will live in the greater Pashtunistan, they would be ready for war against Pakistan. His statement is opposed by Tarkai, as he said Afghanistan was not in the state to afford such things. Tarkai then goes to USSR, but when Hafeez Learns that he is revolting against him he crushes him and takes the power. And in that period, Babrack Carmel seeks help from USSR against Hafeez. And here USSR interfere completely through its forces in 1979. And Afghan believes war is mandatory for them as USSR has attacked them, America who is already waiting for such a chance, influence its power along with Saudia and Pakistan for the radicalization of Afghanistan. USSR when attacks Afghanistan, many of the Afghanis migrated to Pakistan. Students are admitted to Madrisas, religious cards once again were used. The great capital powers such as Britain, America, and France involved their agencies. Pakistan gave them the main power, Saudia Riyal whereas America used all its weapons to radicalize Afghanistan religiously. USSR was defeated by Mujahideens at that period and the Taliban didn’t exist.

Then civil war erupts in terms of ruling Afghanistan. When Christiana is asked what raised the Taliban, “their reply was Mujahideens” due to the war crimes they caused to Afghanis. Mujahideens set warlords in different areas. They spoiled humanity, spread vulgarity, made sex slaves, took taxes from the businessmen.
In addition, Mullah Umar creates his Talibs force in Khandahar, though, at that time they were not in much power, they wanted to stop the Mujahideens in their area. Now the Afghans who paid taxes to Mujahideen’s warlords, financially aided Mullah Umer’s Talibs to secure their routes. And Taliban power strengthened. Also, some historians claim that Mullah Fazal Ul Rahman also supported the Taliban. And when Taliabans overpowers Afghanistan, they set their rules. Such as music is prohibited, women are prohibited to go outside without a man, No cameras and more to fully radicalized Afghanistan. Again Civil War rises, Northern Alliance resist. And then Hazara-Shia Genocide begins as Taliabans believe they are non-Muslims

Therefore, the lecturer concluded his lecture in the following words that as Baloch, We should know about Talibanization because some norms that never belonged to Baloch and Balochistan but it has now affected us indirectly due to its impacts. Drugs and Kalashan Kov culture all are created by Talibanization. Our society which has always introduced itself as Baloch, now first religion comes and then Baloch, Religion was never radicalized in our areas, Baloch as a secular region was turned into a religious term. Baloch always followed their thoughts and Ideology, Women were always part of the decisions and wars since history but now are not allowed, in every area Madrisas are built.