Home Articles An investment in knowledge pays the best interest 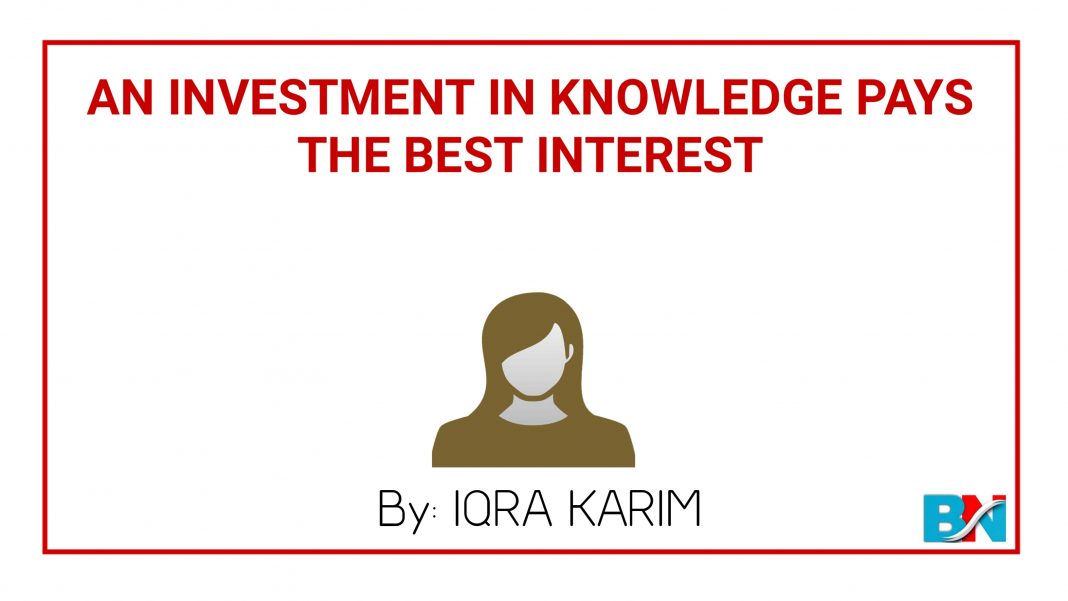 A state that doesn’t invest in knowledge always remains poor not in term of financial status but in term of minds. Such states always end up poorer. The same is the case with Pakistan which has never invested much resources on one of its provinces called Balochistan. There is no secret that the education system is substantially deteriorated in Balochistan. There is no doubt Balochistan is the richest province in term of natural resources, land but, sorrowfully, the poorest when it comes to education. It has the lowest literacy rate as compared to other provinces. As per economic survey of Pakistan 2019, the literacy rate stands at 55.4% among which the literate women cover the 27% only in Balochistan. It is lowest figure ever estimated throughout the world. Such a low literacy rate has impeded the progress in the province. Moreover, what are actually these factors which are holding back the education system in Balochistan?

According to sources, infrastructure of educational institutions is very concerning across the province.Infrastructure of educational institutions is nor up to the standard. It has made it almost impossible to create a learning environment. The priorities are misused by legislators. Clean drinking water, wide classrooms, and proper four wall boundaries are required to maintain a progressive learning domain. Students have no access in clean drinking water nor do they get an effective provision of text books for which they need to share the classrooms. Some schools lack properly built washrooms which is an essential part of the building. Well-constructed classrooms play an important role in formulating a proper learning environment. Teachers may never teach the students in an effective manner until aforementioned damages are restored.

It is believed that teachers play a vital role in raising the youths of state. Nonetheless, teachers who are inexperienced and untrained always end up making no efforts to bring reforms to the education sector in regard of knowledge. Teachers in Balochistan have experienced very limited opportunities to train themselves in their 15 to 20 years of service. They cannot insert creativity into the minds of students until they learn the new trends to process a creative education system. The teachers must be provided training opportunities so that they can challenge the problems a student faces in the journey of his learning different things.

Balochistan has gone through horrible disasters among which education woe comes at the top of list. Our policymakers have yet done nothing effective for the advancement of education system in Balochistan. The literacy remains the lowest until the inexperienced teachers are trained, students are provided basic facilities and strong measures are taken for the plight of out-of-school children. If education is transmitted to next person rightly, it brings prosperity in the country. The government must try every possible way to bring reforms in the education system of Balochistan because education is the only tool that plays a significant role in uplifting nations.