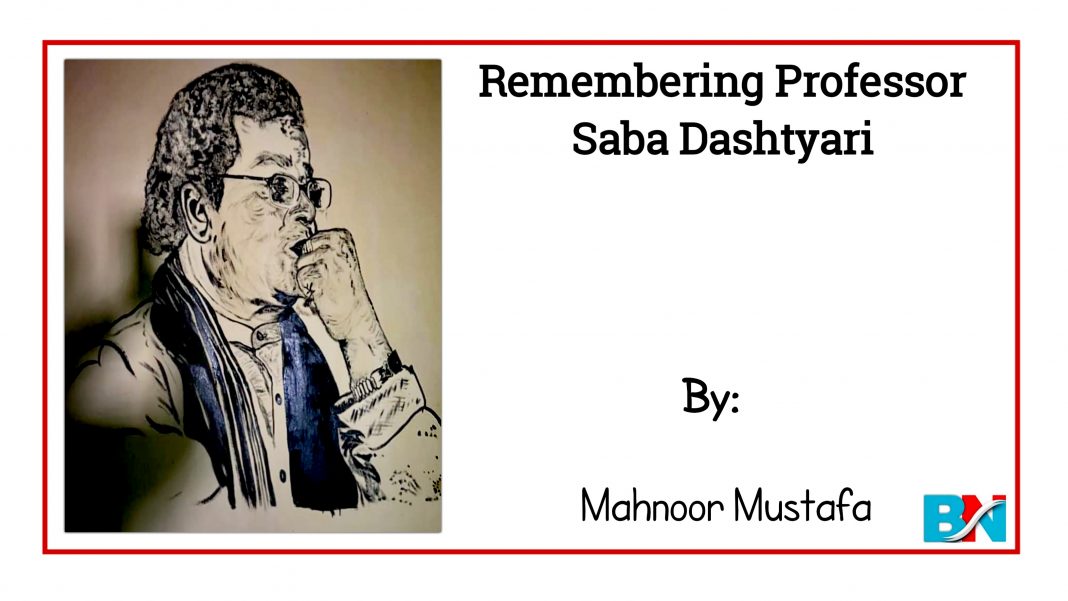 It was June 1, 2011, a very hot day, when I was getting frustrated. It was a tough day going around when I received a text message from my cousin: “Saba Dashtyari has left the world leaving Balochi language and literature orphaned”. At that very moment, I was shocked as to who Saba Dashtyari was and how Balochi language was orphaned with his death. I kept thinking that who is Saba? It should not be something disrespectful, but I thought Saba was a female.

Later on, I came across some literary works of Sir Saba Dashtyari after which I turned to read his biography, his life, his profession, his works and his motive. All ended leaving a strong love and respect in me for Sir Saba Dashtyari, but I felt it was too late to know about such a figure.

Ghulam Hussain Saba Dashtyari, commonly known as ‘Saba Dashtiyari’, was a professor of Islamic Studies at University of Balochistan, Quetta. Unfortunately, he was badly wounded and killed on Wednesday, June 1, 2011 when he was on a walk.

The slain professor belonged to Lyari. He was a Baloch philosopher, a nationalist scholar, researcher, poet, historian, writer, teacher and a true legend. However, he was never interested in Balochi language in his early life. Even though, he himself quoted that when students talked with him in Balochi, he felt disrespected and termed ‘Balochi’ as the language of people of jungle.

Interestingly, a drastic change occurred in his life in 1982 when his friends forced him to write and broadcast for radio Quetta in Balochi. Hence, this event brought a change in his life and thereafter he became a devoted soul of Balochi language.

He had deep affection towards poetry writing and contributed master pieces of poetries to Balochi literature. He also wrote short stories and the subject of his short stories placed him to a different level from the other writers. The short stories “Aas o Aseeb” and “Darda ke bemaret” display the socioeconomic dilemma of lower middle class Baloch community of Karachi.

Furthermore, his works include “Dood” (the custom), “sunt” (the barren women) and “Jegband e ars” (The over flowed tears) show how women are tackled with agonies in Balochistan. Similarly, his short story “tranagani bonzah (in depth memories) portrays the sad story of a widow namely Sammi who belongs to tribal belt of Balochistan.

Apart from his writing, one of his everlasting works includes the establishment of Syed Hashmi Reference Library in 2003. His aim of establishing this library was to facilitate every Baloch with each piece of poetry written in Balochi to provide information about Baloch and Balochi language. He wanted to keep everything in this library which was written in Balochi or about Balochi language or literature. He also introduced many Balochi certificate courses.

Sir Saba Dashtyari in 2003 was honored with the award of “Tamgha e Imtiaz” by government of Pakistan for the meritorious services he rendered in field of Balochi literature.