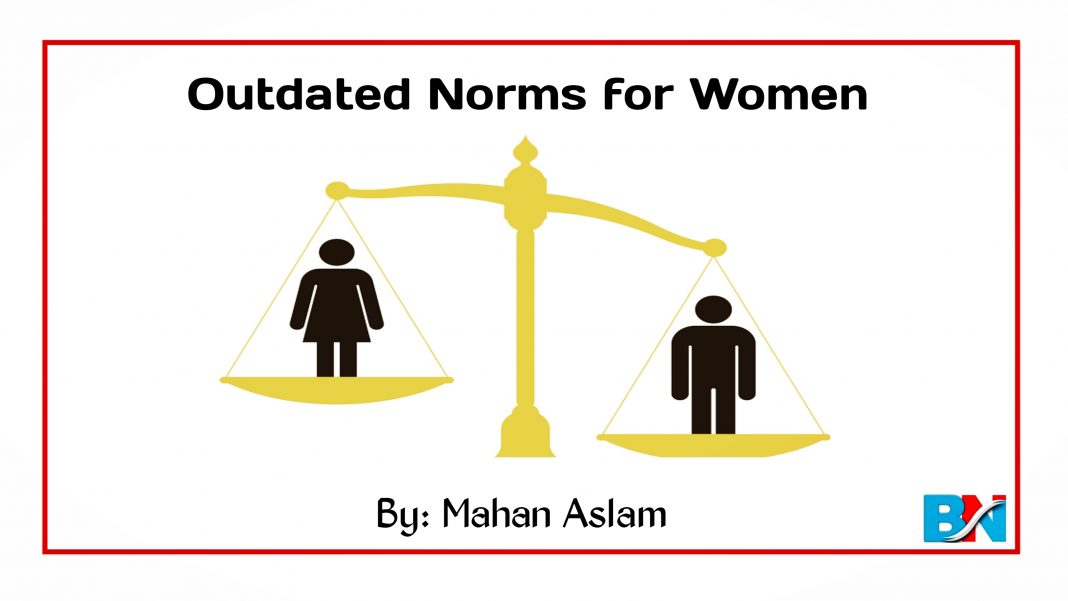 Growing up in a society as Pakistani, it is so hard to become a woman here. She has to prove her worth to everyone in the society with so less opportunities given to her. It is always a woman to sacrifice in order to get a recognition; in her family, in her society, and in her workplace. On the other hand, womanhood means carrying the honor of the family, neighborhood and the whole society. Sometimes I wonder how did the women survive or how are women living behind the four walls under the given circumstances?

On a similar note, we hear negative criticism on feminism and feminists who solely ask for their equal rights of life. They only speak of vesting equal opportunities to both the genders in the normal wave of life, which is fair and better for the development of our society. It is simply giving the life’s decisions to the particular individual other than the whole society towards a particular woman. Those who blame feminism, did they ever blame the society being so harsh on a woman?

No one but a woman knows how she fears everyday, going out in broad daylight, of being harassed. She is always in dismay what if she chooses her way of life and society slings mud on her character because every time a woman gets out of her house or does what is against the society is labelled a slut. A woman is in constant battle with the society for her very due rights, nevertheless, for every choice she makes.

To a great misfortune, when a woman uses social media and decides to post her picture, dozens of men slide into her direct messages. They allege on her character and narrate by themselves that a woman of a reputed family never posts her picture. I suppose how come they judge the character of a person [woman] by merely sliding into her picture on social media.

The stories do not end here only; the girls when dress up for their own cause are claimed that they do it for attracting the other gender. In an era as current, we still lag hundred years behind towards changing the ill-fated mindsets of the society. In other words, we live in a society where a woman is always shown as an ornament and brought up in a way where she was constantly reminded she belonged to another family and her life is meant to serve her spouse and get ready for him. It disappoints me (and I believe all the other girls too) when (we) see people still blaming a woman who stands up for herself and choosing a life she wants.

However, this culture needs a culmination from here on. We ought to change this mindset for the very coming generation. We have to raise them for a society which runs for equal participation for both the genders; a society where both genders are sighted with the same eye and valued equally in all walks of life. It is all our intellectual backwardness that has caused us to remain this undeveloped in the growing world.

Imagine a world where you are invisible and you struggle to be seen and heard. That is how a woman’s life is; she fights to be recognized and valued. That’s where things turn around badly and it is where we need to change our practices. When we give them value and opportunities to perform in the society, we will all see a wholly different and better society.

In short, every child’s behavior is shaped at home. Hence, it becomes the core duty of the parents in particular, neighbors and relatives in general to help their children in slipping out the gender discrimination. When we bring reforms in our living, it ultimately becomes fruitful for the coming generation to learn from our practices.