Home Articles Balochistan Under The Shadow Of CPEC 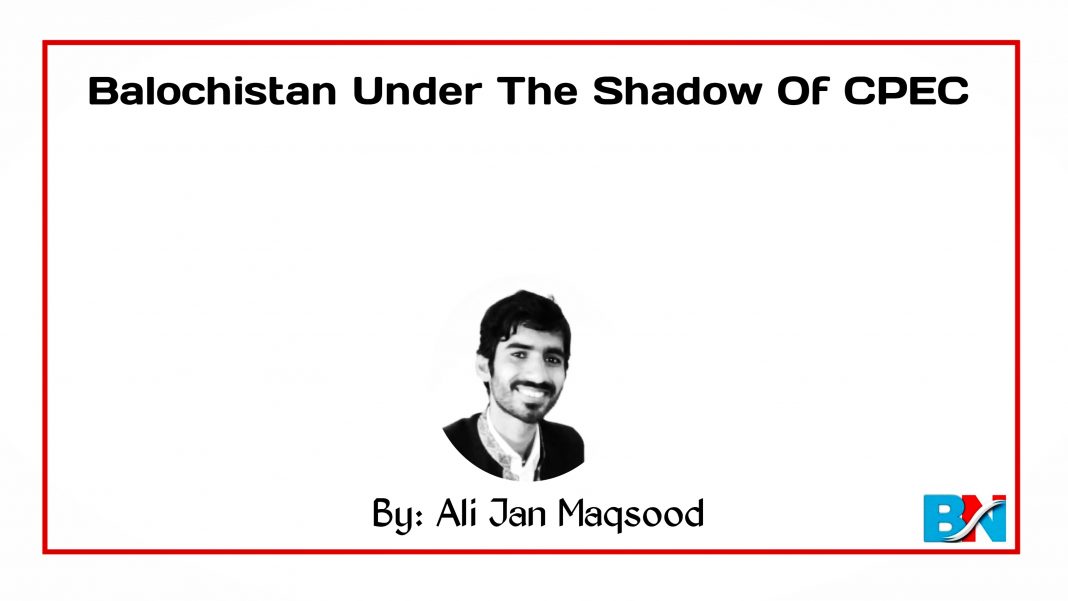 Balochistan is resourcefully very rich, but it is very poor in literacy, infrastructure, development, job opportunities and so forth. Balochistan’s single track roads have caused abundance of accidents resulting in loss of numerous lives from years, particularly the route connecting Karachi-Quetta and Zhob. When one intends to make a journey in Balochistan, no one knows if he or she turns back home safely or not due to the poor road communication of the region.

China Pakistan Economic Corridor (CPEC) is deemed to be the biggest project of Pakistan with China which is given a practical shape in Balochistan’s port city, Gwadar. The project is of 62$ billions, which aims infrastructural, economic and educational developments to other provinces of Pakistan in general, Balochistan in particular, but things are diverse; Orange line is activated in Punjab’s Lahore, whereas the main highways of Balochistan are till date single.

Coming towards education, a bill was passed in Balochistan Assembly for Gwadar University back in 2017, but construction has yet not begun in the CPEC city. The politicians are fighting with one another (maybe cause of bagging the funds) whereas the locals of Gwadar are still traveling to neighboring city Turbat and capital city Quetta for admissions. Sadly, not all of them secure admissions in Quetta and hence turn back to Turbat University where they rarely find their interested disciplines due to shortage of departments in the varsity.

On the other hand, Gwadar Stadium has attracted international figures who have shown desire to playing in the stadium. However, the locals of Gwadar are restricted to playing in their own soil for reasons as people and government officials from Islamabad, Lahore and Karachi visit the stadium and capture selfies. Resultantly, the local cricketers have boycotted to play cricket in the stadium and turned to the football ground where they have made a pitch in the middle of the ground.

One wonders if this is the development Balochistan needed. On one side, the government is attempting to taking out the locals from the port city in order to bring strangers in the city and make them permanent residents of Gwadar, and on the other, they are promoting fence for the city in the name of security threat for the locals.

When we talk of infrastructure, Balochistan has longed for double roads but it could gain no serious attention from the authorities. The main route connecting the main cities of Sindh and Balochistan [Karachi and Quetta] is a very busy road, which is yet single. According to reports, annually 6000 to 8000 people lose their lives due to road accidents in the given Regional Cooperation for Development (RCD) highway.

When we talk of job opportunities, we mostly find the locals in making their own with their cars by going to Iran and supplying petrol and diesel. Sadly, the Law Enforcement Agencies are interfering in the business who have come in the region for fixing security issues. The border drivers have always been free to travel to Iran and supply petrol and diesel anytime they wished, however, the agencies have fixed dates for them to travel for the people of Panjgur and Turbat [Makkuran] areas in particular.

In my recent counter with a Zamyad driver, he told me that his turn comes after every 12 days which is so long. “It is only for the people of Panjgur (and Turbat). A chef is also fixed on our cars which tells them our locations and we are not allowed to turn to Iran border from other routes.” he goes on, “And here we have to wait for our time which takes very long.”

He was concerned about his children’s expenses because before he turned to border almost after every week but now he is restricted to two weeks per one trip. “The problem is that with only two trips per month, we do not get much income because custom officers, levies, police, and FC take their charges from us after which very little money gets safe for us when we go back to home.” he said in utter grievances.

One cannot find a check-post empty but the law enforcement agencies who have lined up all the border cars and taking bribes – that too very much. Besides all this, they have caged the locals under their self-made schedule. “They have reminded us that we are slaves in our own soil,” he finished up and went.

This region has always contributed to the state, but failed to grab much attention in return. On May 28, 1998, Pakistan conducted its nuclear tests in Raskoh (Chaghi) where the local population, since then, has been badly infected with multiple diseases as disabilities, cancer, etc. Back then, some similar promises were made by the then Prime Minister of Pakistan, Nawaz Sharif, who, in return of the nuclear tests, vowed infrastructural, educational and health developments of Balochistan but nothing in practical.

Back in his 3rd tenure in 2016, prime minister Nawaz Sharif asked for the same developments in return of CPEC. Once again it was ‘no’ to Balochistan. If China Pakistan Economic Corridor is meant to make more economic zones in the region, why aren’t they initiated? In fact, if economic activities are scheduled in the Baloch belts, there are almost no chance of promotion of Baloch people but citizens from the other provinces and China.