Home Articles Eid on The Roads 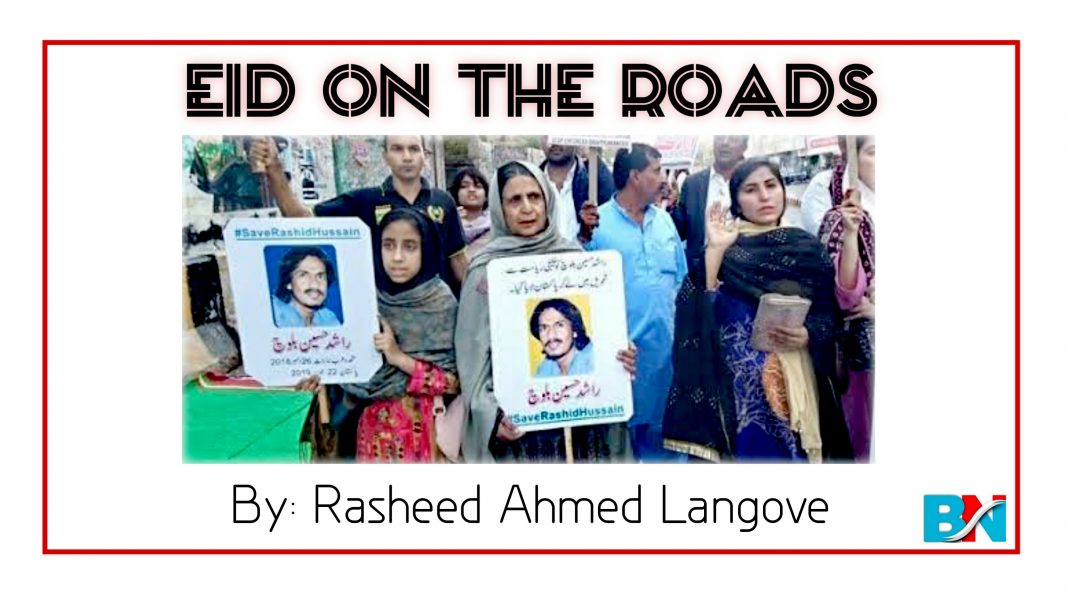 In Balochistan, one cannot find a single family who can joyfully celebrate the holy ceremony of Eid. For some years, every Eid is bringing about more pains to most families in this part. The normal routine in Eids is staging various protests in different cities of Balochistan by the grieved families for their beloveds whose whereabouts are a question. They do not know whether they are killed or still breathing.

The local reports claim a large number of missing persons in Balochistan. The state institutions are alleged to have done all this, with the support of death squads who, for some money, narrate lies on innocent Baloch people and enjoy luxurious lives in return.

Baloch women, who are a symbol of great honor in the Baloch customs, are found on roads vociferating for their missing brothers, fathers, cousins and other relatives, specifically during the holy day of Eid. Sadly, Law Enforcement Agencies are said to be the safeguards of the citizens but instead, they are the ones spreading violence in Balochistan.

Hayat Baloch, a student in Karachi University, was killed on August 13 [2020] in Balochistan’s Turbat by the Frontier Corps. His only sin was that he was helping his father in his date orchards in Absor [Turbat]. Despite his parents crying desperately following Hayat who was being dragged by five FC men, they were unheard and hence Hayat was shot eight bullets in front of his hapless parents.

Recently, a similar incident occurred in Balochistan’s capital city Quetta when Faizan Jattak was shot by Eagle Squad in Sariab road. It seems as if Law Enforcement Agencies are meant to kill innocent citizens instead of protecting them.

Balochistan is never treated equally, there inhabits very few higher educational institutions and job opportunities in many towns, due to which the locals travel away from their hometowns. Upon their return, they are welcomed with bullets or get kidnapped.

Lastly, Pakistani media is free only constitutionally whereas we cannot see any such a thing in practical. The media shows a donkey fallen in a well but never shows Baloch being killed or kidnapped on daily basis. They need to know their job well and work beyond pressures or else they should declare their ban on reporting on certain issues, specially when it comes to Baloch and Balochistan.