Home Articles An unheeded affair: The dilemma of Pak-Iran Border 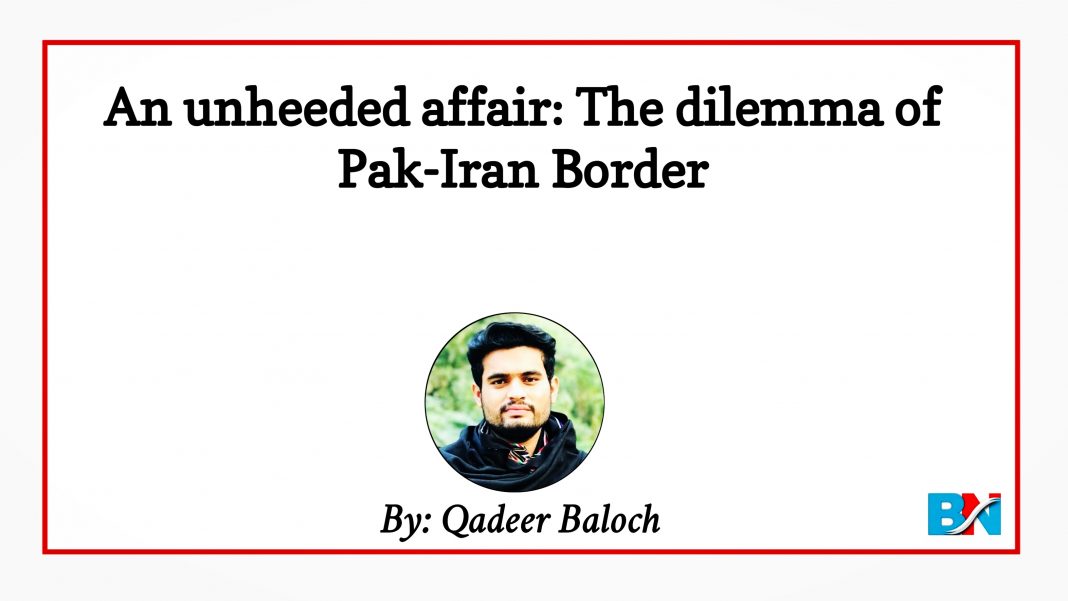 The recent closure of the Pakistan-Iran border has had a major economic impact on people inhabited in the areas across the both side of border. People crave for drinking water in the scorching sun. Three people have died as a result of lack of water, according to news, and hundreds more are in critical condition. People began digging in the ground in search of water, but to no avail. On the other side, the government has shut its eyes and is silently witnessing the whole spectacle. There has been no attempt to open the border_gates for these poor drivers, and no other alternative has been offered.

Thousands of drivers’ lives are in jeopardy. People’s health is worsening as a result of not eating anything in the evening after fasting all day in this unbearable heat. Neither the Provincial nor the Federal governments have taken any action to help these unfortunate people.

Considering the socio-economic conditions of Baluchistan, one acquire this speculation that how economically deprived are they already. A province like Baluchistan which is abundantly rich in natural resources has no royalty over its own resources, and the bottom end of the hierarchy is subject to inexorable poverty. Plundering of resources without empowering the locals is a practice of despotic and colonial rule, which has been in practice in Baluchistan for 73 years. Whoever comes to govern, they strengthen the center or other provinces leaving the masses of Baluchistan rejected and plagued without changing the fate of the natives of the land where the resources are being extracted. From poverty to unemployment, Baluchistan has always been on the top. Unemployment has reached to an extent that people are forced to commit suicide.

Concerning the lives of Baloch, one can see that there is a huge deprivation of Food, Water, Infrastructure and employment. And these issues are never brought into limelight. The only thing that catches the sight of mass media is CPEC or Gwadar port and ironically a new built stadium in Gwadar also made good rounds in media. Despite these gloomy circumstances, the locals had only a few source of livelihood and major source of livelihood in Balochistan is inter border transportation. By closing this, the authorities are going to implode the system from within. If we really look deep at it, we will come to know that how difficult it is to bring diesel from the border. An ordinary driver, who earns barely Rs 5,000 a round, but has to put his life in danger to get this money, a driver who travels on a deserted road where he can be robbed, where he can get sick and even die because there is no hospital nearby, because of the lack of roads, he has to go from the mountains, where his car may overturn, where he may meet an accident, where his diesel may fall, but still he takes all the risks and goes out to earn for living.

If we look at the poverty rate in Baluchistan, it has crossed the figures of 70%, whereas 60% of these people are suffering from malnutrition, which even do not have access to food. The conditions of the people living with hunger and poverty have become devastated. Many have been forced to flee their homes. According to a report, Baluchistan is the richest region in Asia in terms of resources, but at the same time it’s the poorest in term of human development index (HDI). Similarly, unemployment and inflation have made the lives of locals miserable. More than one million of youths in Baluchistan are unemployed apart from the general population. Because of unemployment most of the well-educated youths who are supposed to be employed are doing diesel trading across the border as drivers. Some of them have even a higher education degree but still are fed up with the nose-diving economic situation and are compelled to drive to earn a living. On the one hand, the government has completely failed to provide jobs to these young people and in spite of this, when these young minds do this business to earn something for livelihood, the government is trying to close this business instead of providing more opportunities to them.

Shutting down Iranian diesel not only harms diesel traders but also other low skilled businesses. If the border gets barred then all those businesses which are solely dependent on the inter-border trading seize to exist. Like hotels, restaurants and garages stop functioning. It raises concerns for the people who are indirectly affected by it. So many lives become affected at once. This is because they all depend on the inter-border trade. Apart from this it provides opportunity of earning to underprivileged classes. The purpose of closing this business is not only the economic murder of a diesel trader but also the murder of all the local businesses.

Not so long, the agriculture sector was flourishing and generating revenue and employment for the local masses. It would not be wrong to say that half of the population of Baluchistan depended on agriculture prior to the tragedies it encountered with. And these tragedies were floods and then water shortage.

Looking upon all the paradigms of socio-economic growth, we must know the worth of Inter-border transportation and the government has to settle it as soon as possible. If not sorted out in due time it may have far more worse consequences than one can imagine.