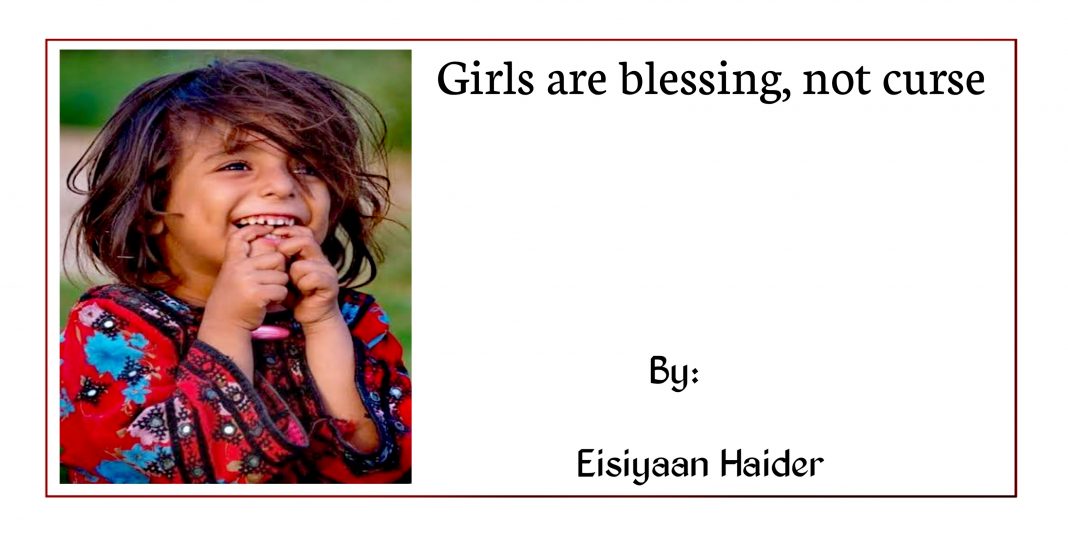 Why don’t families rejoice the birth of a baby girl in the Baloch society and curse her for getting born? Whenever people show anger on the arrival of a baby girl, I get perplexed, my emotions get into a sudden flash of disappointment, my eyes rain the drops of tears and the validity of my thoughts get to break. The congratulated words of happiness take into the depth of sadness in most homes where a baby girl is born.

Neither father, who is the true protector of his daughters, nor the mother, whose daughter is considered her frank reflection, wear the beautiful smile but has the tears of thrilled events to get acknowledged about the birth of the innocent soul. They want a baby boy, thinking of his existence a great fortune but not the girl’s one. Why is it so all the time? Why is a girl not loved like a boy in our society?

She, too, is a human keeping thousands of wishes, dreams, hopes to an ignited destination, granting comfort of life to the parents and peace to the nation with so much development. But she is rejected. Her presence is denied. Her birth is taken as curse just because she is a girl.

Girls confront unjust in every aspect of their life. They do not hold the shadow of defense. She is raped, killed, tortured, married in an early age being considered a burden and– a lot more. Be that school, work place, restaurants, parks or garden, she is victimized with acid attacks, stabbed, sometimes stoned for the wrong concept of honour and many more.

Girls are given less value and demotivated that they lack aptitude which lays in boys. We have built in us a concept that girls are fit for nothing but household responsibilities only. Even, if they are given chances of doing anything well, society and family spoil it by intervening negativity in it.

But things are not so. Girls can do anything. They are courageous, brave and strong like boys– even more than boys in most cases. They can make everything possible with their utmost efforts. They do everything perfectly. They can work and bring salaries like their opposite gender. They can run the family too. They can boast up a business zone and get profits to the economy when their talent is given opportunity to get utilized instead of getting ignored.

In states like Pakistan and Afghanistan, the practice of a tradition is done known as “Bacha Poshi”. This practice is adopted since decades in which girls are forced to have the physical appearance of a boy so that they can support their parents on rigorous labour jobs.

It is a very terrible act that girls manage to do. In fact, they face difficulties when they are told to get into their real shape. If girls can support their parents, there is no need to give them the appearance of a boy rather she should be given protection with the chances. And then she can prove that she is not less than boys.

In short, girls are blessings. They are the backbone of a family and a country too.
States, believing in women participation in politics, economy and etcetera, get well-advanced and achieve so many benefits. But the countries where these souls are devalued remain backward. Girls should carry full freedom of enjoying their rights as boys do. They can do anything done when they are given the due worth due time.