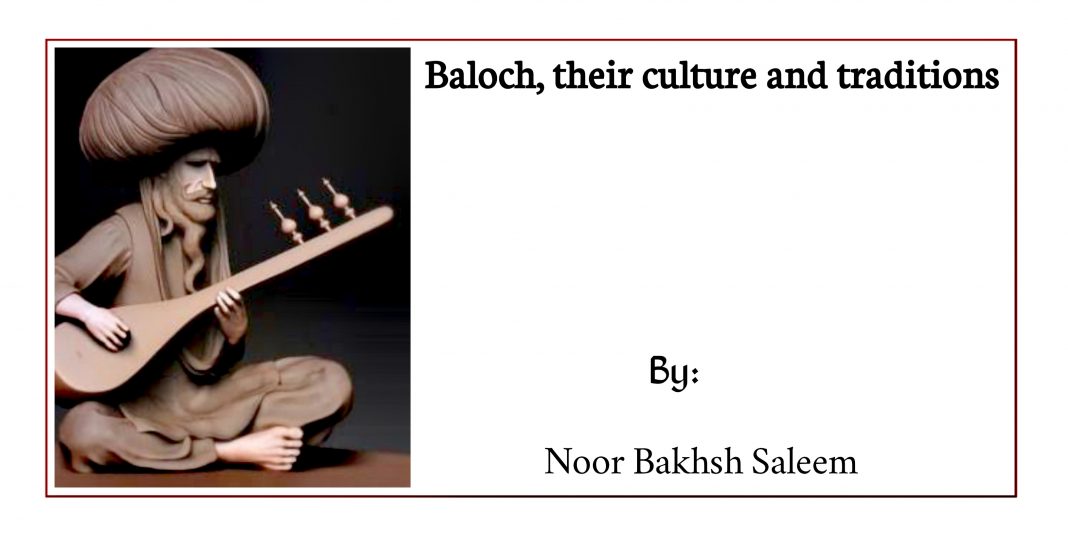 The word Baloch, by its connotation, means nomad. Over 75 percent of Baloch live in Balochistan. Apart from Balochistan, they also dwell in other provinces of Pakistan. About the origin of the word ‘Baloch’, Rawlinson (1873) estimated that the word ‘BALOCH’ came from the name of Babylonian king and god blues. Similarly, Dames (1904) explained that it is derived from the Persian language in the 6th century. Also Naseer Dashti (2012) believes that the word ‘Baloch’ has been derived from the name of ethnic group Balaschik living in Balochistan.

In like manner, some estimate that the population of Baloch is around 2.5 millions worldwide and it is difficult to estimate the exact number but they make 5 percent of Pakistan’s population. According to some other people, many Baloch are said to have migrated to Balochistan from Aleppo (Syria) in the 12th century.

The people, belonging to Baloch tribes, speak Balochi language. Balochi language is an ancient language and its roots are traced back to Iranian branch of Indo-European family. It has resemblance with the languages such as; Sansikarat, Old persian, and many more. These now-a-days are said to be as dead languages.

Similarly, the tribes are divided into, RIND, BUGTI, GICHKI, LASHARI and many more. Every tribe has a head known as “Mir”, “Sardar” or “Malik”. These tribes’ heads are members of district and local jirgas.

Besides this, in Baloch culture, marriages are different and unique from the other regions. Every member of family takes part in marriages; they express their joys and happiness by following the traditions of their culture. Usually, the marriages are done in young ages (teenages) but are arranged in early childhood or at birth. In some tribes, there is a tradition of takings ‘valver’. It is a sum of money paid by the groom to the family of the brides.

When we come to dressing, Baloch males wear Shalwar Kameez with distinct additions and modifications. They also wear turbans, mostly the elderly men. Some other men also wear loose Shalwar with long knee-long shirts (pashk). Whereas, females wear beautiful handicrafts covering them from head to toe with pulchritude. Their dress also consists of a shirt having a big pocket and embroidery and embedded round mirror work in front.

On the other hand, Baloch culture is rich in folk music. They sing and dance with a fire in the middle, surrounded by the male members of the society, which is very rare in recent times. The famous wedding songs of Baloch culture are ‘Nazenk’ and so many others.

Coming to food, Baloch people usually have meals in morning and evening; men and women eat separately. Flour, rice and millet also are important dishes of Baloch. There are many foods for Baloch which they like very much, including Baddul (a bud coming out from a tree in jungle) and sheer (milk). In fact, if we compare the food of other countries with Balochi food, they are totally different. Baloch people have simple and healthy food.

Hence, Baloch are lion-hearted, respectful, and honest people. They rely on agriculture and nomadic life. But, in the recent times, things are wholly different. We can hardly find a region where traditions are followed.