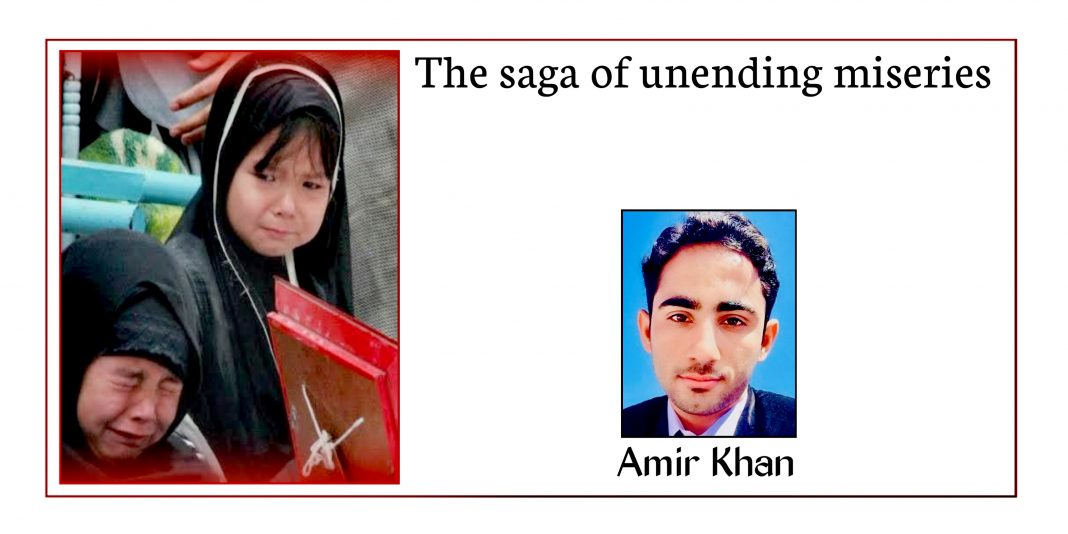 Recent attack on Hazara community once again highlighted the unending miseries of the downtrodden Hazaras who are denied with their most fundamental right– the right to life.

On Sunday [January 3] 11 Coal miners were butchered in the Mach area of Bolan district. Since then, they have staged a sit in to mourn the killings of their loved ones. They protested, disrupted the traffic, and presented a charter of demands which included, the visit of premier Imran khan before the slain miners are buried and setting up a judicial commission to investigate and trace the culprits and thier facilitators. All the demands are prima facie legitimate.

After the brutal murder of Hazaras, opposition utilized the opportunity well and lambasted the governament for not providing adequate security to this vulnerable community. Maryam Nawaz, chairman of Pakistan Muslim League (Nawaz), rushed to the bereaved famlies and condemned the bestial act of violence that has shaken the conscience of humanity in best possible words.

It is not the first time such brutal attacks are unleashed on this community, but they had been targeted in past too. What makes it different is the series of condemnations came from the members of major political parties in a way that was elusive in past. Maryam Nawaz’s sympathy cannot be dubbed more than an act of gaining political mileage.

Pouring condemnation would make sense if she had remained an all time supporter of this community when they were shunned, persecuted, and gunned down with impunity in past. Tears would be more worthy if they were shed in a time when the political circumstances were in her favour.

Hazara community was hit hard during the reign of her father, but it could not arouse an emphatic feeling, a helping shoulder, and a sensitive heart. She paid no heed to the sufferings of Hazaras when they were mercilessly murdered in the past.

Politicians in Pakistan always downplayed the feelings of Shia sect and waited for such unfortunate incidents to occur so that they may manufacture a politically stable environament aiming to earn political grandstaking.

Imran Khan, the premier, rubbed salt on the simmering wounds of Hazaras by dubbing them ‘blackmailers’. He openly resisted the idea of visiting the victims’ family untill they buried thier loved ones. He has uttered the most vile statement of the century by calling the peaceful protestors as blackmailers who had dried their eyes and forgot thier smiles in the loving memories of thier deceased.

The Prime Minister demonstrated unprecedented incompetency in governing. His inept dealing with PDM has triggered a political instablity in the country. He remained strident on his stances of not meeting protestors until they buried the bodies. These characterstics bear the hallmark of an egoistic man who is ready to put the national interest at great stake but will not let his ego be hurt.

The space for Hazara community is shrinking in Pakistan. State has failed to realize its constitutional duty of safegurading the lives of people as enshrined in Article 9 of Pakistan’s constitution which puts a responsiblity on the shoulders of state to protect the life and liberty of its citizens. Theoratically, the constitution of Pakistan may be called a magna carta of rights, but practically, it only remained a textual document being flouted on daily basis.

This bloodshed must stop now and Hazaras must be given thier due place in Pakistan. The state needs to protect the citizens as guaranteed under the constitution. When state cannot treat citizens equally, it cannot bind them to obey laws and constitution. Slain miners are burried now. Imran khan visited the victims and situation is turning toward normalcy. But the question is still lingering for an answer; when will Hazaras be treated equally in Pakistan? Who will guarantee the safety of this community in coming times? When will the governament take proactive steps and bring permanent halt in the brutal attacks directed towards this community? Establishment of an impartial and an independent judicial commission is sine qua non to fulfill this demand in true sense. Otherwise, the trust deficit will be widened.