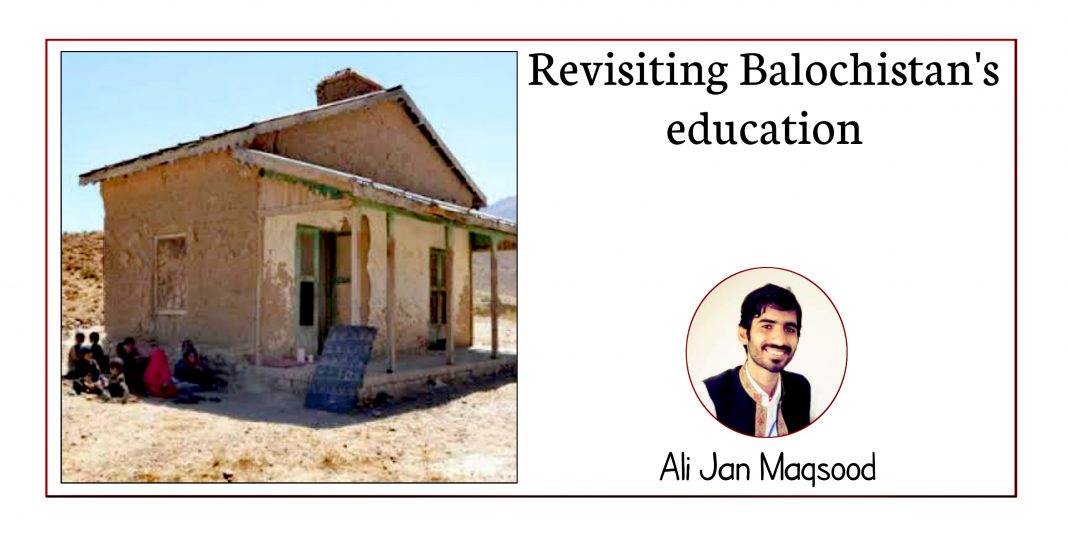 Balochistan is the richest province of Pakistan in terms of natural resources, occupying the largest portion of the national territory [44%]. Sadly, the province is subject to severe negligence in its educational sector. In fact, the very important eighteenth amendment could not prove to hold immense significance in revamping the fate of the province educationally.

According to the recent report of UNICEF Pakistan, the province owns 14,855 primary, middle and high schools [77.3% for males and 67.4% for females], most of which are in miserable states. In the province, 9,247 schools have no access to toilets, whereas, 9,838 schools are deprived of water facility. It ultimately drags the female students in particular to quit coming to schools. Because the schools do not provide sanitation and water, and they cannot turn towards home in case of emergency due to long distances between their homes and schools.

Alif Ailaan’s report on Education of Balochistan, 2017, clarifies that after almost every 30 kilometers a primary school is estimated to subsist in Balochistan, 270 km takes one to a middle school and 370 to a high school.

Balochistan, on the other hand, is quoted to be the home of “out-of-school children” in Pakistan where over 1 million children [78% girls, and 67% boys] are reported to be away from schools. The unreported children are an exception to the report. Mostly, the causes are closed institutions in their regions. Non-functionality of around 1,800 schools [27.9% males and 25.6% females] is lifting downward the education of the province.

UNICEF further elaborates that Sherani district of Balochistan exists 67.6% of its schools as out of function, followed by Awaran 56.3%, Musakhel 50.0%, Washuk 47.8%, Kohlu 44.4%, Jhal Magsi 42.2%, Panjgur 39.0%; and the list goes on. When this number of schools amount to no spread of education, how come the province get to a good education system?

The other reason why the children are out of school is ghost teachers. According to Alif Ailaan [2017], 5,000 teachers are estimated to be off-duty but getting salaries on time. It is because of the external influence in Balochistan’s education as teachers are hired on recommendations. In Balochistan, 22.3% male teachers are absent with 28.6% female teachers. This absenteeism is amounting failure for many kids to join schools_ particularly in villages.

If hardly ever a teacher attends a school, he is given an average of around 120 children per class. Alif Ailaan clears that around 6,000 schools are run by a single teacher in Balochistan_ most of which are primary schools.

Sadly, the educational officials do not have frequent visits to the educational institutions to properly examine the conditions of schools. They claim the unsuitability of the situations, however, things differ in practical.

The UNICEF report unveils that only 48.1% schools of the province are visited by officials on regular basis. Unluckily, only 5.1% schools are visited by officers in district Gwadar which is the hub of China Pakistan Economic Corridor (CPEC); Awaran follows with only 6.1% visited schools picturizing a depressing scenario of the educational emergency in the region.

The provincial government ought to take the matter seriously and come up with proper policies in the education of Balochistan. They need to ramp up the number of schools and higher institutions. Most children get to do their matriculation from their reachable schools, but fail to take admission in higher institutes due to very less opportunities of a higher education in the resource-rich province.

The province possesses only 116 Inter and Degree colleges [75 for boys and 41 for girls], with only 9 universities. The seats are very limited in the given institutions. The government needs to build at least a college in each tehsil of the province to promote higher education in Balochistan.

Secondly, an educational team is to be set by the authorities to check and balance the presence of teachers in every single school of Balochistan who should visit the schools at least once a month. They should also note the facilities and ensure if the funds are invested on schools and students or not.