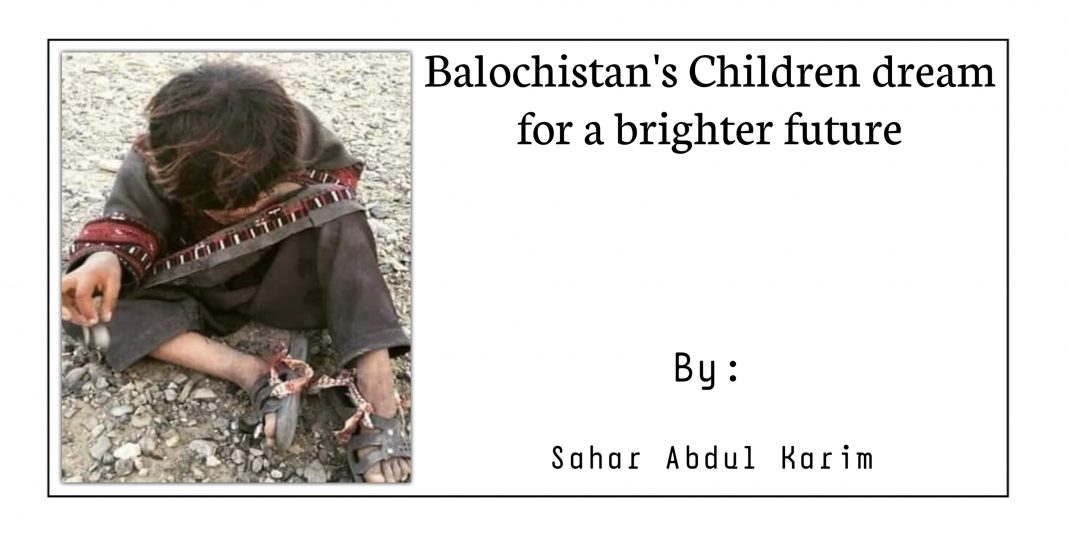 Everyday, as the sun rises in Balochistan, I get to see children hoping for a better day and dreaming for a brighter future. But, I mourn again as the sun sets. All those hopes and dreams of these helpless children are meant to be buried with the setting of the sun. I grieve in sorrow and perceive in my lone world where agonizing thoughts keep eating my mind until I reach to a conclusion. The sunrise and the sunsets are never designed to beautify my land, morally.

Children of my land strive hard to get three times of food and to feed their family members. As a child carrying my bag loaded with books, I too have come across children of my age carrying bags full of garbages. I always wondered, why don’t they study in school and learn something. I always thought they are naughty kids who play in garbage dumps instead of attending classes in school. Soon my this misconception was erased and replaced with something new called “poverty”. I perceived how innocent I was who never asked these kids if they ever dream of studying. Again, I pondered what could I do to help these kids study, carrying bags full of books, not garbages, enjoying life instead of grieving? I got speechless for I could not do anything. But the enthusiasm to do something for them cultivated itself within my soul.

Children in Balochistan suffer everyday. A day spent for them is that of a hard time. You must have only heared that time is too long for those who grieve, but my helpless children have suffered and are yet suffering. I believe they are the most hopeful and the strongest beings who thrive even after days of hunger, long sleepless nights, no roof houses in the harshest of both summer and winter days. We enjoy rain, but they mourn sleeping on the wet land. Why is the constitution not being followed when it strongly condemns the sufferings of these helpless children?

Balochistan, being the richest province of Pakistan, is yet the poorest. Though the land is barren, it hides the sweetest and the most colourful flowers dig deep into it. Those flowers are the dreams of these children which will remain barren and colorless until fulfilled.

Balochistan is facing great challenges of education since its early days. The main reason behind it is poverty and negligence of the governament.

Balochistan is basically under the gripful crisis of poverty which is the root of its backwardness. According to a report of UNDP, Balochistan is the poorest province of Pakistan with an increase of 71 per cent of rural poverty.

Being the richest land yet the poorest province, Baloch children have become oppressed and helpless in each regard. They cannot study and fulfill their desires like other children. The rich surely have no say for the rights of their children for they have enough money to fulfil their rights themselves. But the poor children of my land have always become voiceless. They are the poor kids of the rich land who own no basic rights, no facilitated schools and no health facilities.

According to the coordinator for Balochistan nutrition cell, nearly 52 per cent children are reportedly victims of chronic malnutrition or stunting. Malnutrition is worsening the lives of children and snatching their basic rights. To bring an end to malnutrition, the governament and the child health authorities must ensure addressing clean drinking water, good and healthy nutrients and healthcare facilities.

All other basic rights for children can be granted through it. It is glad to mention that Pakistan has authorized many projects providing funds to poor children, but those funds are provided according to the population of the children whose births are officially recorded. When births of the children are not recorded by the state, it means they do not have an identity or nationality and are thus not counted or entitled in the number of children having the citizenship of Pakistan. Such children suffer until death having no rights and cannot survive in the deprivation of their basic rights.

Additionally, a number of children in Balochistan are victimised by a deadly disease commonly called thalassemia. These young children are fighting a huge war between life and death. Among them only few survive, the rest of them suffer until death getting no blood on time. Officially, there are no blood centres authorized by the governament in the southern districts of Balochistan. Being a citizen of Turbat, District Kech, I have seen poor parents travelling from far villages to Turbat in order to get blood for their children who, since birth, are suffering from thalassemia. Turbat has a non-governmental and non-profit Blood Bank for thalassemia patients which aims to provide children with blood on time. Its founder and chairman is Irshad Arif who with other young men work for the thalassemia patients. They too arrange blood camps in order to get blood donors donating blood.

The dreams of these little children are buried and unnoticed. They are spending their days and nights fighting with this fatal disease instead of carrying books to read. They too have the right to acquire education and fulfil their dreams. This can only happen when the governament provide blood centres sooner than later to save these precious lives. I believe the highest priority of a child must be his health without which nothing could progress.

Besides these, Balochistan is basically suffering from issues which, instead of decreasing, are getting common by each passing day. The rights of children in Balochistan are never meant to be given according to the constitution. The laws that are made against child rights violations are meant to be broken too.

Child marriage in my land is getting common everyday. I mourn in grief seeing children of my age getting married. Why are their rights ignored and disregarded? Children at age 15 and 18 are married and their lives are put into risk. I myself have come across girls married even aging 13 and 14. I always wondered what the reasons could be.

The first and the foremost cause of all these child rights violations to me is poverty. Poverty has become a huge cause and a challenge for parents who cannot afford to feed their children. The other reasons can be traditional practices, gender norms and religious beliefs which are making child marriage prevalent in Balochistan.

Mournfully, poverty is increasing the enrollment of children in different workplaces. With the increasing of child labour, the number of out of school children is also increasing. Children are found working in garages, coalmines, and collecting garbages. Such poor children are compelled to do labour in order to feed their family members, and thus get deprived of learning and acquiring education.

Howbeit, children who acquire education in Balochistan is not always quality education. The schools are neither facilitated nor have well-qualified and punctual teachers.

Through all these, we come to know how child rights are violated in Balochistan. Our governament has failed to take notice of all these issues. Children are the future builders of a nation. If they live such a miserable life getting no rights, how come our nation progress? The governament need to work on Balochistan and provide all the rights to the children. Let the children progress and enjoy their rights.