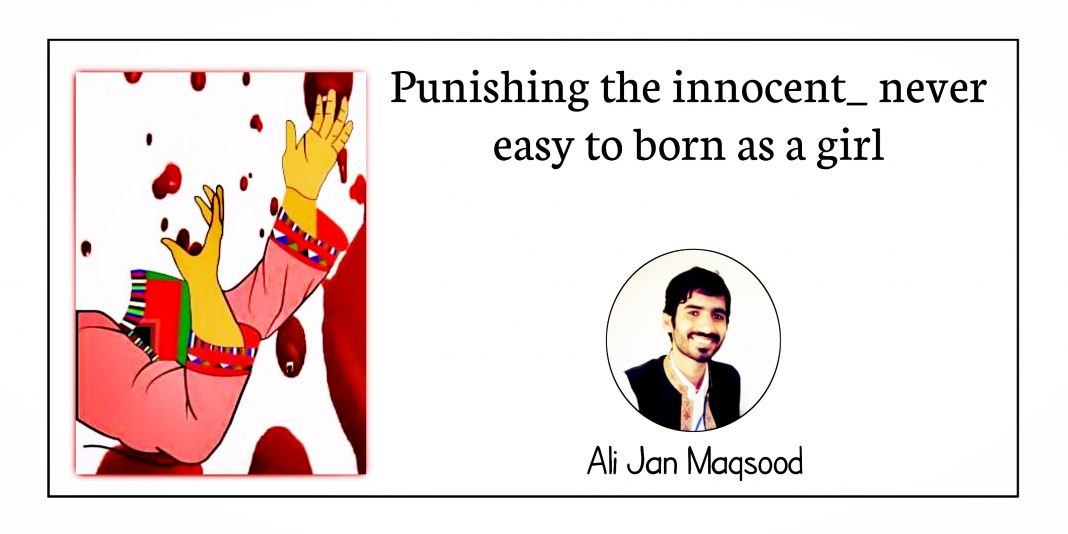 While scrolling my gmail, one day I received a mail from an unknown sender, posing a question: “Will you write my story_ the story of a dreamy girl caged with strong chains of disbelief, dishonesty and soullessness?” I was dumbstruck and freezed at the same moment.

Getting born as a girl is not easy in the Pakistani society. You never know when you are brutalized by your family_ external factors affecting your “honour” designed by the society is an exception. You are raped and, worrisomely and unfortunately, held liable for that. You are tortured by the same people who are socially behaving like your safeguards. You are cursed by actions for being a girl, but said to be the spark of home.

From the like circumstances, breathes a newly born baby girl on 12 September, 1998, in the house of Muhammad Hayat, Samia Baloch. She is the only daughter, with an elder brother, of her parents, belonging to Turbat. Her parents showed extra love towards Waseem, her elder brother, but ignored Samia in all regards. She was sent to a governmental school, whereas, Waseem was admitted in the best private school of the city. It was not that her family could not afford, but they never wished to send their daughter to a private school where boys and girls were getting education together.

In Balochistan, it has functioned as a key factor in drop-outs of many female students_ specially in the rural areas where one hardly ever finds a school for boys, searching nearby a school for girls is something afar.

However, Samia never complained about anything inhumane she faced: she was, in times, in fact, beaten for contributory mistakes. She was called a curse upon their family. She did not react anything in front of them, but wetted pillows all nights. She kept the moon her friend to share what she could not share with her family. But, moon, too, like other people, mostly disappeared for days.

When she passed her matriculation, her brother had already been shifted to Lahore for higher education. When she asked her parents to send her to Lahore for further studies, she was directly refused and given two options; either to take admission in Government Girls Degree College Turbat or quit your education. She opted the only degree college in Turbat other than staying away from education.

In the Baloch society, most families invest lakhs on a boy, but are rarely agreed to spend thousands on females, because they call girls “burdens” and properties of others. They think they are their guests before their marriage, and would have no other bond after they are married off.

Likewise, one day, Faris, Samia’s maternal cousin, came in their home from his village for his further studies. Samia’s mother had great terms with her siblings, and hence, she cared for him more than Samia. On the other hand, Samia was used to such negligent behavior, and thus adopted her fate. “When you are not cared by your own mom, you feel like getting the worst and most painful wound one can ever get.”

Despite everything, she maintained sheer silence and let everything go as they were. But one night, Faris sent a text message to Samia asking her to come in his room, excusing to have a small piece of work with her. Samia refused saying it was too late, and calling him to meet her when morning appears, but Faris had different intentions.

The very next morning Faris put all the blames on Samia by showing her message “Meet me when morning appears” and deleting all the other messages. Samia, for her security, had already deleted the chat with Faris taking it very lightly. He alleged that she had texted her that she wanted to meet him and they would have a love affair. “Why the hell would I want to do that? But I had nothing to take it off me. As a punishment, my both hands were tied with a rope and I was beaten,” tears flowed unendingly from her both eyes.

She began to hate boys from there on. She has kept herself isolated_ till date. She never greets any boy in the fear of being the subject of misunderstanding by her family. She still faces severe harsh words, cruel tortures, but she has none to take help from. “I shared my story just to let the other girls of my town to be aware that threat can generate from someone inside your family too. I know I am not the first, neither am I the last girl to face like situations. So, better have yourself secured by yourself other than relying on anyone else,” she mailed before she deleted her gmail account.