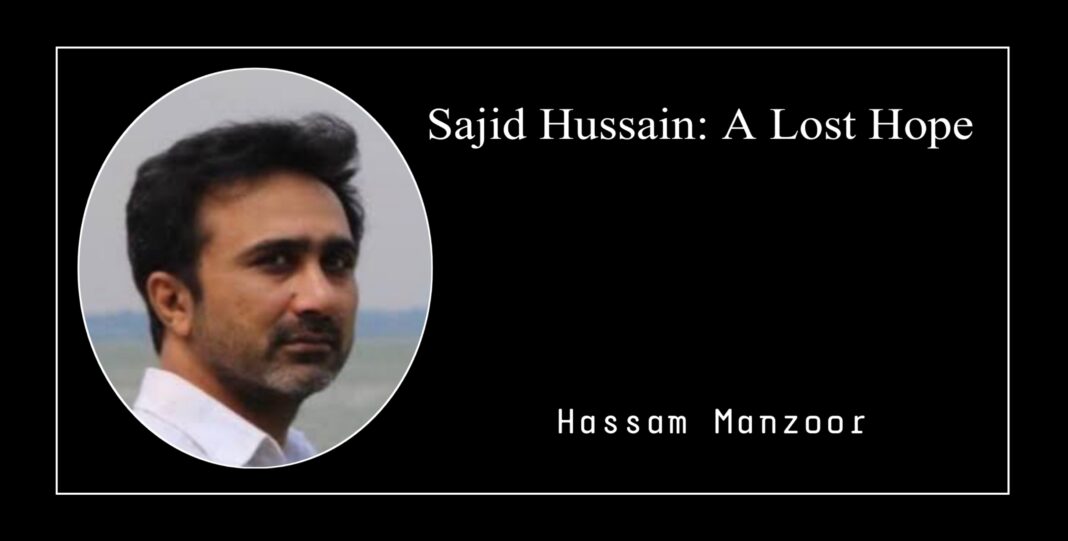 The year 2020 is by now seen as a year that has brought a number of misfortunes to the world, for Baloch like previous years, it too brought many misfortunes. One such was the news of Sajid Hussain, the editor-in-chief of Balochistan times, disappearance from Uppsala City in Sweden. For nearly 20 days, his family did not make the news public in hope for his safe return— but also in fear that the kidnapper(s) might harm him. The hope dashed; the fear became a reality. His family was informed on May 25 by the Swedish Police that they had discovered a body lying dead in the Fyris River and that they had strong reasons to believe it was Sajid Hussain’s corpse.

Sajid Hussain died young much before his dreams could materialize. The news of his death spread like a wildfire engulfing the whole of Balochistan as well as the International community, filling with grief the hearts of his well-wishers and breaking his family for the rest of their lives. “This should have happened to me instead,” his aging father said out of sheer helplessness.

It was painful to see how his youngest brother broke down while Sajid’s body was descended into the grave. The firmament burst into tears, leaving all the funeral attendees soaking wet.

Not only is Mr. Hussain’s demise a loss to his family but a severe blow to the Balochistan as a whole. However, we had virtually forgotten him the moment he was physically living with us all. Now, indeed, he lives in our minds. The worth of persons, however high should be their place, are not valued during their life time. This is a shared mentality of all humanity, so only Baloch must not be blamed. Sahadat Hasan Minto, for instance, received wide recognition for his work soon after his death, despite that he was held during his life as an iconoclastic pariah. This is how societies function— to say the least.

Born on January 16, 1981, in a village, Nizarabad, a union council in Tump Tehsil of district Kech, Sajid Hussain lived briefly in his village before shifting to Karachi for attaining higher education. He did his matriculation from the Nasra School and then attended intermediate classes at the Bahria College, Karachi. He was enrolled in the Pre-engineering discipline at college but had a deep aversion to engineering science. Instead, he was in immense love with literature. From his interviews and writings, he was influenced by Franz Kafka, a German-speaking Bohemian novelist, was a great source of inspiration to him during his formative phase, though he also admired other writers, such as Gabriel Garcia Marquez and Milan Kundera. Interestingly, both of them had also been exiled like Sajid.

Despite his leaning toward literature, as mentioned earlier, he had himself enrolled in the subject of Economics at the University of Karachi, for this time he had realized that learning literature is something that is independent of any academia. Later, he earned degrees in the fields of English Literature and Balochi as well from the same university.

Sajid started his career as a journalist, working as desk editor at Daily Times and assistant editor at the News International, two of the prominent newspapers in Pakistan. Later, he launched an online magazine, the Balochistan Times, of which he remained the Editor-in-chief until he breathed his last. His work covered extensively the gross human rights violations in Balochistan, drug trafficking and religious fundamentalism. As a journalist, he would invariably search for the hidden stories and write what a journalist must— the truth. But truth is not always free of danger. He thus invited into his erstwhile ”trouble-free life” trouble: police raids on his house, life threat from unknown callers and so forth.

Consequently, he fled the country in 2012. Before his final settlement in Sweden, he had a short-lived stay in the Gulf and Africa. With this, a new chapter in his life began.

Life in exile is not as easy and as luxurious as some might perceive. Their lives on a foreign soil are in a shambles; they are homeless people of no fixed abode. Other than the internet, they have no source of interaction with their families. Neither they receive a warm hug, nor do they get in the morning a hot rogini nagan (oiled bread). What is more, they are filled with a sense of nostalgia for the well-spent days they had in their homeland.

Carina Jahani, a professor of Iranian languages at the Uppsala University, who is also a leading figure in the Balochi literature, translated Sajid Hussain’s Balochi piece entitled “ Darandehi Pa Sarey, Shegan Pa Sarey”( Facing Exile, Facing Taunts), in which she quotes Sajid explicating life in exile. “Since I went into exile, people’s taunts and reproaches are killing me. If someone has indigestion in Kalatuk, we are the ones to face the reproach: here the Baloch are poor and destitute while you are enjoying the luxuries of Europe. ”

Even some exiles, when they spot children on the street, run after them to shower them with love, albeit knowing that an unwanted touch constitute a crime in Europe. Asked why they do so, they say they see their offsprings in the person of the European children.

Luxuries of Europe do not seem to be inclusive, rather they are reserved for a segment mainly comprising the indigenous population. If the refugees ever get some of them, they must probably be the remains. Is it worth going into exile for the sake of some leftover, leaving behind the comfort of home? It sounds a bad idea— to me at least. Thus, Life in exile is not a preference but a compulsion.

A pupil of Sajid told me that he had then no one to teach him English and Balochi. He used to contact Sajid on WhatsApp so that he could be assisted in those subjects. “Before I contacted Sajid Saib, I called on a few literary men but owing to their hectic schedule, none could take out time for me. Nonetheless, Sajid Hussain would instantly reply me. I had been in a process of learning for one year. Now that process has stopped.”