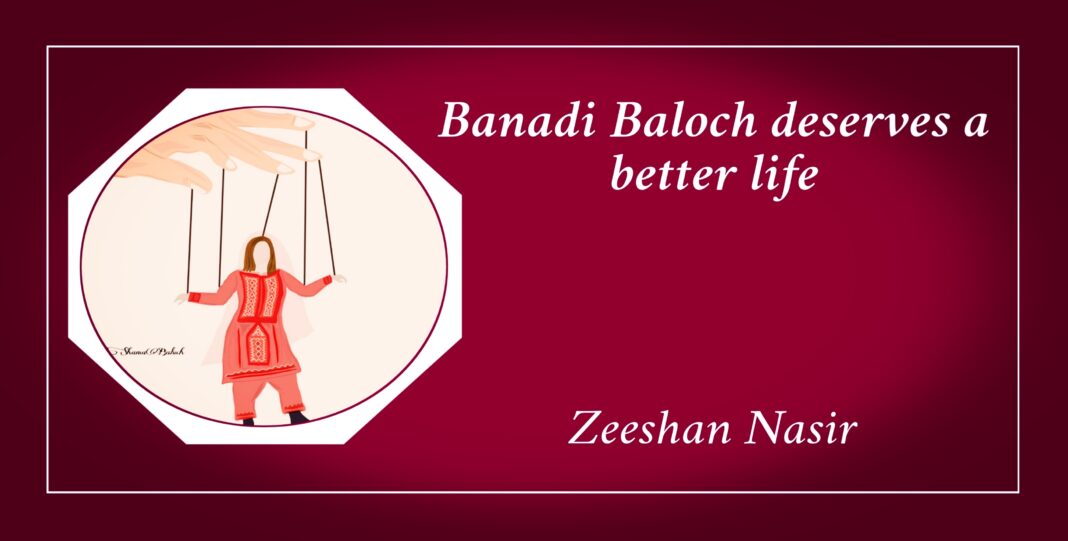 As the sun shines over the horizon, casting a very pleasant weather, Banadi [aging 14] leaves her bed and starts her daily chores. She prepares breakfast for her uncle, does the dishes and later drops her cousins at the city school. Spotting a white dress, with radient eyes, projected nose and a warm smile, she longs to get an education.

She was sent to her uncle as a maid when she was a toddler_ instead her parents would get Rs.3000 monthly. Here she learnt how to do Balochi embroidery. She sews Balochi clothes and sells them.

“I need to work very hard,” she says looking into my eyes. “Whenever I get the money of my sewed clothes, I need to provide money to everybody in my family; to my parents, my able and disable siblings and my uncle. And in the long run, my knucles and joints ache.” She sleeps late till night sewing clothes.

Banadi’s story runs parallel to all those 1.8 million unfortunate girls and boys across Balochistan who are abused, raped, killed in the name of honour and are the sole bread-earners of the family. As a result, children like Banadi lose the entire beauty of their childhood.

“Whenever I don’t send money to my family on time, my father calls on my uncle to beat me.” She says in despair. “And I am not even given food to eat by the time I pay them.”

As it stands, it is a trend in the province, where a great number of children flock to the cities in Balochistan as child labourers, working in garages, in houses as maids, and engage in begging.

Banadi’s mother and her elder sister worked as maids and her abled younger sisters and brothers will likely be trapped in the same vicious cycle in near future, deprived of an education.

Banadi’s unfortunate situation is because of a lack of education in the family. She has been engaged to her cousin and will be married off soon: perhaps she would be a child and raise a child.

“But I will not remain silent like my mother and will not let the same episode repeat to my children,” she states in buried eyes. “I will educate and provide them with books and stationery. I will go as long as possible to educate them.”

Before she goes to bed, she reassures herself, “I will tolerate all these hardships in order to live a beautiful life.”