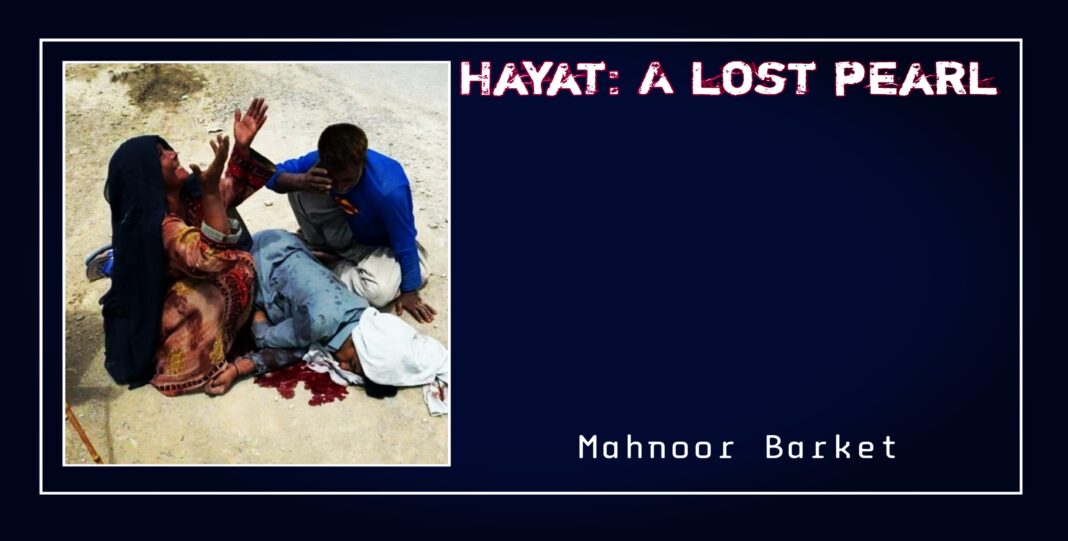 On the eve of independence, 13 August 2020, where every other citizen seemed busy decorating their houses and streets with the country’s glory, Mr Hayat Baloch went to the date farm where his family work on contract base to give a hand to his destitute parents. Optimistic to help his parents, ease their burden and earn some pennies for his education, he didn’t know he was breathing his last breathes.

Soaked in blood, his pen spoke: Do I scent blood or is it my ink oozing out from the barrel? Like ink, it was sticky but the redness of the liquid uttered a desperate story. On the soil laid a man, hushed but loud around him were the cries and whines, and next to him was a pen. And hence, the story of the man and the pen ceased there.

It was the story of Hayat Baloch who floated in his own blood right in front of his helpless parents, whose death is inevitable.
At mid afternoon, a couple hours after his departure, I received a text “Hayat is no more”. I couldn’t believe my senses. I remained cold. A feeling of uneasiness was engraving my soul. Gathering some energy to type, I replied. This is some kind of prank, right? But no it wasn’t a prank. The next text said, “Hayat is dead, that’s it!!!!”

My whole body started to tremble, and soon it was numbed. I sat still for minutes, I felt nothing. I couldn’t believe my senses. His martyrdom started tormenting me. Escaping their way out from the eyes, drops of tears rolled down my cheeks and it was when I knew I was living the reality, not a dream. Right in front of my eyes stood Hayat, his innocent face and envious smile which were now banished from the life. Hayat’s existence was no more “Hayat”.

Six years since our school’s graduation, Hayat hasn’t changed, not even a slight bit. He was a full-of-spirit fellow who retained his own philosophies to live life. He was the only kid in the class with whom anyone could chatter and gossip unhesitatingly, who would help us with any sort of task without even complaining once. He was the secret-keeper, the prank-creator, the fun man of the class who would could be very sensible and disciplined if needed but innocently mischievous at the same time. He endowed merry moments to the class, making our memories of school epic. His insane talks, carefree behavior, perfect sense of humor and that ardent smile which remained persistent throughout his 25 years of life are all doomed now. The flashes of his existence are now secured in the memories only; life couldn’t bestow him with more moments to live.

Born in a destitute family, we are always taught the shrine and glory of education. Unlike others, we are not taught that ‘education is the key to success’ but that education is the tool to end all the miseries; it’s a route towards a better life. Success holds a different definition for us; success isn’t defined by fame or lots of money but from the felicity emerging from the eyes of the parents, their comfort and the luxury of their love.

We all remember this famous quote by Bill Gates, “If you are born poor, then it is not your fault. But if you die poor, then it is your fault”. And Hayat too knew the essence of this quote. He was striving to clash the stereotypes and refused to follow the vestiges of his ancestors, he wanted to achieve a seat of an administrative office of the state instead of laboring in a farm and he did all he could. Craving his way towards a better life, striving and breaking hurdles on the toughened path of life, Hayat had dreamt dreams and had set goals. His has often talked of appearing in Central Superior Service (CSS) exam because he had seen the potential he possessed. I believe he saw himself as an administrative officer in a time span of less than five years. From helping his parents in the date farms to burning midnight oil and studying, he was at the climax of his dreams. He expected the graph of his life incline to a resolution of beautiful existence not an abrupt cease; a sheer catastrophe.

An estimate highlights that 1.5 million children of the resourceful yet impoverished Balochsitan are deprived of basic education which is significant in terms of the future of the nation. Hayat was among those selective breeds of the nation, he was a young, talented, charismatic and enthusiastic student. Balochistan has lost Hayat, She has lost a gem. His loss is indeed a loss to the nation because kids hailing from destitute families are hardly passionate about studying but Hayat was among the effectively-studious, obstacle-confronting and reforming-bringing student. According one of his professors, Hayat would spend hours talking about myriad philosophies of lie and psychological aspects of youth. Undoubtedly, he was a reform-seeker who had vibrant dreams for himself, his family and his society.