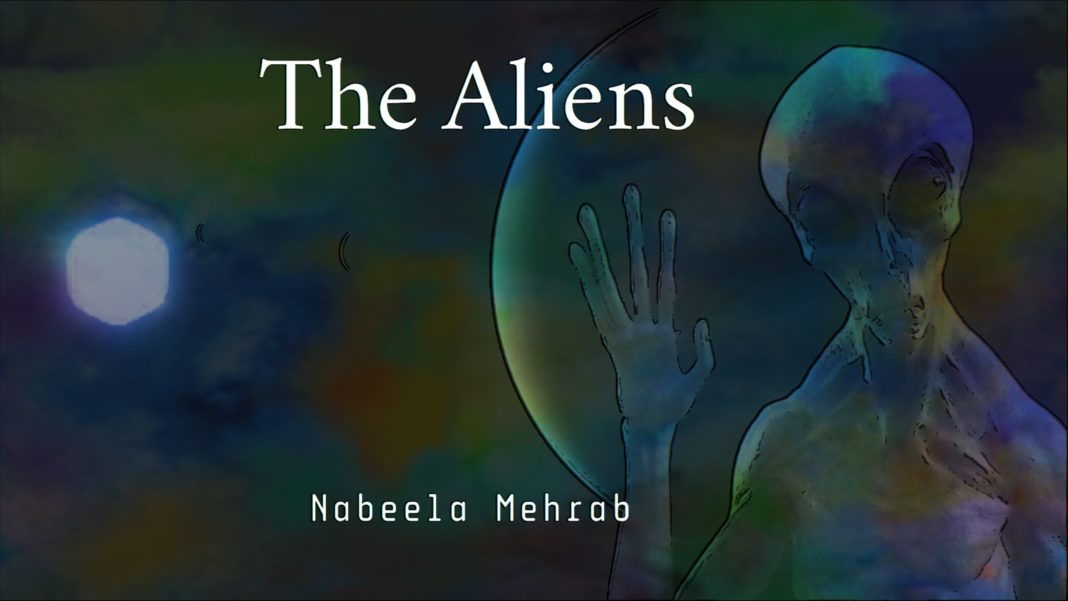 Back then, I was on a journey with one of my cousins as my seatmate and two others were on the backseat. I expected it would be a good travel, but life had diverse things for me.

When the journey began, a woman came and sat right beside our seat with four kids; two girls and two boys. The elder daughter was of same age as my cousin. She was very cute with twinkling eyes filled with “kajal”, her both hands were full of bangles and designed with henna, having a large brade with sharp noise and a scarf on her head. She and her younger brother were continously gazing at us.

They did not drag their concentration even for a while. No matter we were sleeping, yawning or talking, they had fixed their eyesight on us from the word go. My cousin laughed. She told me mockingly, “We are aliens_ literally may be.”

When we journeyed almost half of our travel, the bus stopped for dinner. We all went out of bus. I with my three cousins went in the hotel, had our dinner, made ourselves fresh and came back to the bus. But when I entered the bus, my heart ached and tears kept trickling down from my eyes when I saw the same lady who were with four of her kids still on the bus.

Did not they come down for dinner? If they were inside, why was the door of the bus closed? Why were the two children gazing at us so closely back then? Did they want to talk to us? Did they have tears in their eyes? Did they have any complaints from we humans? I was surrounded with a series of questions when I looked at the hapless mother with her four kids.

Sadly, her husband_ who was sitting on the side seat_ had come down for dinner. But why not they five?

And then I tried to read their eyes. They all were on the bus with no food_ literally they awaited for food from someone maybe, but who? Did she expect something from her husband which_ after looking her eyes_ I felt she did not?

I silently sat on my seat to see what would happen next. When her husband came, he began to scold his wife in his native language which I could not catch. After some times, one of the boy kids opened a plastic and took out one bread; he began to chew it whereas others were only watching him. And then I eyed their mother who_ on all way_ did not put her head up though she had a feeding baby.

After this all drama, I comprehended: yeah, we are really aliens. We have a slight better dressing, good things to eat, freedom to talk, laugh and live, but amidst all this, we really are aliens.

And then I looked at the very small baby girl who would be married soon after and would face like challenges as her mother was facing by then. This is how our customs and transitions abuse us as girls.

We are really the aliens in the 21st century, because we live in an era where a great many of us even do not have the right on our conversations. Many live their lives with griefful silence and engulf the harshest situations. The emotions are killed with deep sorrows. They are burried with no notice; just people love to control and mold every circumstance according to their sick psyche.

I again watched the four kids with their mother with my eyes full of tears and imagined what my cousin had said back then: We all are really “The Aliens”.