Home Balochistan The feminism that we follow would represent Baloch society 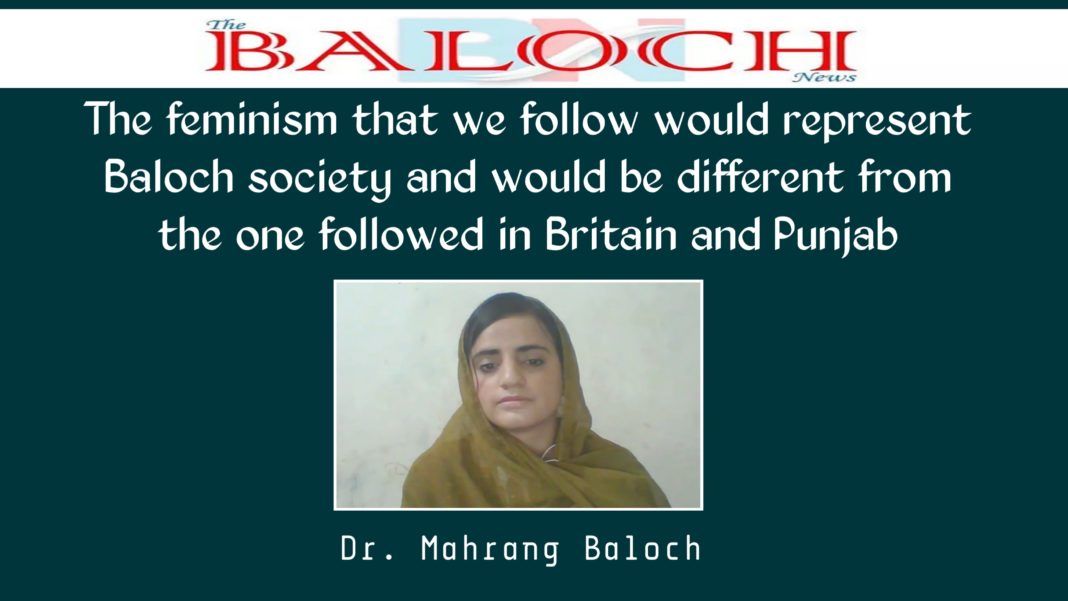 The Baloch News conducted a live Facebook interview with student activist Dr. Mahrang Baloch on 21st of May.

Several questions related to Baloch, Balochistan, online classes, feminism, women empowerment and socialism were asked. We present you some of important points from the conversation.

BN: Why is politics important for students?

Mahrang: Students play an important role for the progress and development of society. They have the potential and energy to change the society in one way or the other. The students have to experience student politics, they should never keep themselves away from politics.

BN: What do you understand by feminism?

Mahrang: To me feminism is gender equality. Every individual has the same values and rights, no gender has the greater value over the other. Colonialism, capitalism and religious extremism has risen the ratio of gender inequality. They have reshaped the societal structure of ours. Such like the Baloch cultural values have been effected greatly. There existed no concept of “parda” in Baloch society, but now such traditions are overwhelming our society. In Baloch history women had leading role for the progress of Baloch society. Women stood side by side with men in every aspect of life.

Mahrang: No society is perfect and like the same Baloch society has not reached the level of perfection. Society is in evolutionary process and there is always room for improvement. The Baloch society is also on the way towards evolution, there is a need to change the concept of feminism. The nationalists should not adobt extremism approach and we (Baloch) are also not pefect. There is always room for improvement in our norms and traditions. We have to study the real concept and ideology of feminism. The powerful forces have changed the real meaning of Baloch way of life. It is necessary to study and understand every movement, and to relate such movements with our society is very important. When the movement of feminism broke up in west, black feminists complained that white feminists did not highlight their issues. I as a Baloch want changes in my society, but it is me who decides what changes I require within myself and for my society.

The feminism that we follow would represent Baloch society and would be different from the one followed in Britain and Punjab.

BN: The nationalism and socialism in Baloch context.

Mahrang: The concept of Baloch nationalism originates from Nawab Khair Bux Murri and the ideology of socialism is presented by Marx. Both of the ideologies push us towards struggling against oppression. The socialists who stand against nationalism are double standard. Because the real socialism is to stand with the oppressed people and help them in their struggle.The Baloch students and youth must study marxism, leninism and nationalism deeply and thoroughly rather then being blind followers and manipulated.

BN: How do the left organizations deal Baloch?

Mahrang: The left organizations of Pakistan never supported Baloch cause in true sense. Once they had fully supported military operations in Balochistan and FATA. They call themselves progressive, but in true sense they are far away from the concept of progressive ideology. The left has never been clear about Baloch cause. They have never stood for us. When it comes to our identity and oppression, they definately chose their patriotism. When you stand against oppression and want to change the system, you should criticise the system in true means and should never support the oppressers.