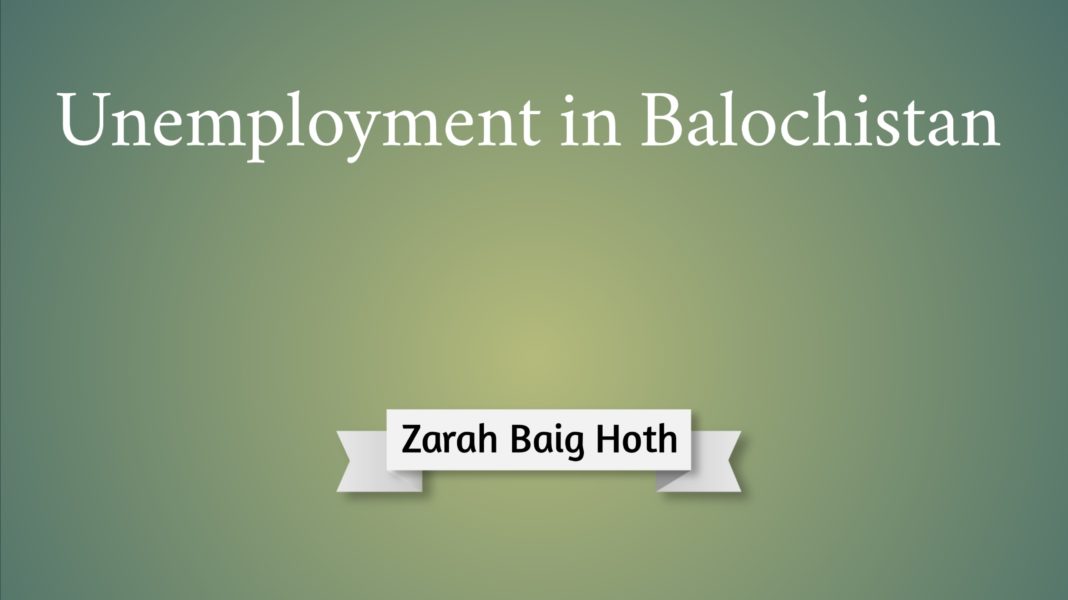 Unemployment in Balochistan is growing and getting worse everyday. Around 60 percent of the province’s population are jobless. Even the degree holders find it hard to find jobs.

Despite being the largest and richest province by natural resources, the province is the most deprived and undeveloped region of Pakistan.

In fact, the province is defying a number of concerns including poverty, corruption, terriosm, nepotism and illiteracy, unemployment is the central issue to curbing all the other related woes.

Furthermore, unemployment is abiding by issues which exist only in Balochistan. As per an estimation, in the well-off region of Pakistan there are more than three million people who are jobless at the moment. The main reason for unemployment is lack of awareness, poverty and lack of attention by the provincial and federal governments.

Even though, Balochistan is called ‘Golden Bird’ of Pakistan being the rich in resources, the region still faces acute problems.

In the province, more than 52% of the population are living under the poverty line. In fact, children of all ages are seen working in garages, offices and begging in recent days. It is because the government has failed to generate more job opportunities.

On the other hand, the population of the province has crossed the 10 millions mark without a single government project to provide jobs to millions of jobless citizens. Previous regime announced the government would provide 35,000 jobs to the people of the province, but that proved to be a hoax and a propaganda ploy to hood wink the public opinion.

It is on record that the top bureauorats were found reluctant to recruit people and fill the vacant posts since thousands of jobs remained vacant. Newspapers have been reporting those vacant jobs time and again, but they were never filled for unknown reasons.

According to reports, Railway Department in Balochistan received sixteen thousand job applications for 90 vacant posts. It shows how the province lacks job opportunities.

According to a rough estimate by government of Balochistan, there are over 30,000 young people who graduate every year from different varsities of Pakistan. Sadly, a vast majority fails to get a job which is a matter of serious concerns.

Dishearteningly, the very few announced jobs are also sold to rich people. These jobs never knock the doors of poor. It depends on the rule of party in the provincial assembly who to allocate the jobs.

More depressingly, a great many youths of the soil have burnt their documents publicly for they are of no use without political influence. Some others have hanged themselves with the fans in great depression.