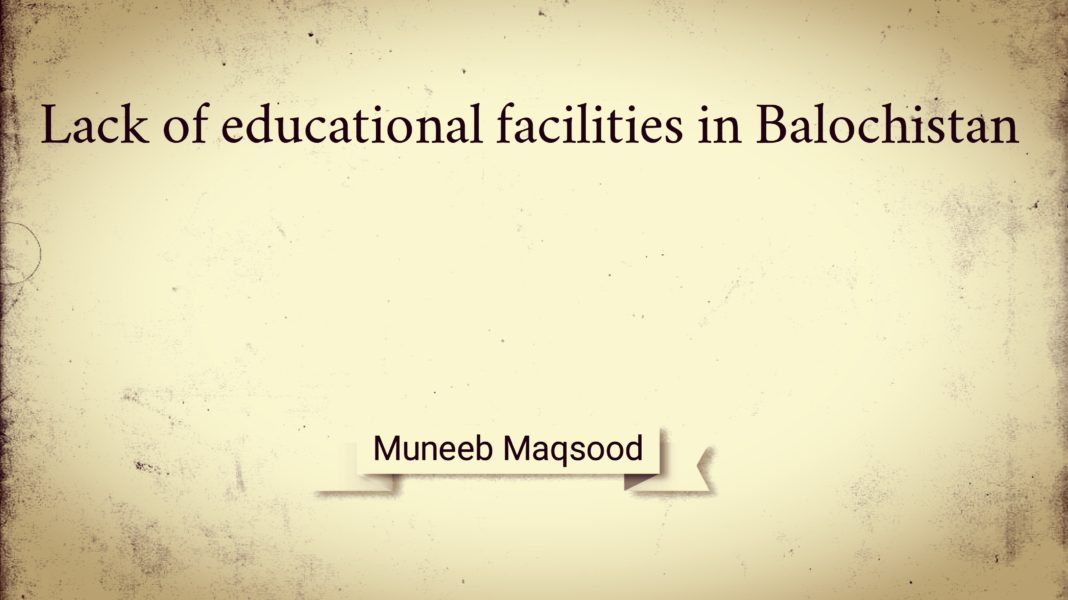 Education is the basic need of every citizen of Pakistan constitutionally. However, Balochistan, the largest province of Pakistan, suffers badly from educational facilitities. The schools of Balochistan largely lack proper buildings, sanitary facilities, wall chalks are used instead of markers, and even water is an issue for a great many rural schools.

More importantly, the rural students sit under open sky to continue their education. It is because government pays less attention to the rural schools whereas the locals are poor who hardly get two times of food.

On the other hand, they cannot send their children to the nearby cities for two reasons in particular: one, because they are poor. Second, they have no terms with the people of cities.

Dishearteningly, in the villages, the students even do not get good teachers. Becuase most of the teachers are appointed politically who are uneducated and are ghosts.

According to a report of Alif Ailan, more than 5000 teachers in Balochistan are ghosts. As they have strong bonds with the authorities, they are never fired.

Witnessing the sickening education system, the poor students get compelled to quit their education and work on their fields or become masons.

To a great misfortune, most of the other schools do not have the toilet facilities. A boy can manage to skip from lack of toilet facilities, but how about a girl? Where would she go in case of emergency?

In fact, government allocates funds for the schools, but they never reach to the right persons. Whereas, in reports they are said to be spent on developing projects of schools, but nothing in practical.

Because the concerned authorities have no visits to these schools, no one knows if the allocated funds are spent on schools or not.

Besides this, most schools in Balochistan have no access to libraries. It results in wasting of time with unnecessary stuff for the students which they could properly utilize if there existed a library. Although many schools get separate funds for building libraries in their premises, but they are never built.

Thus, I plea to the government of Balochistan to take serious actions against the corrupt system of education and standardize the quality of education by providing them with required facilities. If the government fails to concentrate on education, soon we are going to witness an era of great concerns.